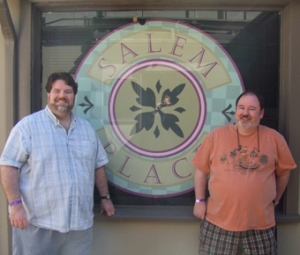 Soap fan couldn’t pass up a tour of one of his favorite soaps.

A big fan of the show, Gordon Parkhurst visited the set of NBC’s Days of our Lives recently and to Soaps.com’s delight, he agreed to share his experience with other fans.

Parkhurst tells us, “I visited Los Angeles from October 1 to October 5, 2009, and I had the good fortune to get a tour of NBC Studios in Burbank, where Days of our Lives is filmed. It was the highlight of my trip. While browsing through the tourist information at our room at the Sheraton Universal, I noticed the blurb for tours of NBC Studios. I wasn’t particularly interested until I noticed that you would be able to ‘see sets from Days of our Lives’, and as a viewer for over a decade, I couldn’t pass that up.”

Upon arriving at the studio, the first thing you notice upon entering is Salem Place. “The outdoor sets representing Salem Place are all located right next to the visitor’s entrance to the studio. In fact, the marquee for the Salem Cinema is right next to the door. It was so amazing to see the fictional place right there, so close. And also, it was amazing to see how small it is. After a brief look outside, we entered the studio to sign up for the tour. The first thing that struck me was how small and not very inspiring the visitor’s center is. It looks rather like an office from 1985. The walls are covered with posters of NBC shows (some of which are no longer on), including a big picture of Bo and Hope Brady (Peter Reckell and Kristian Alfonso), taken in the early 1990s. As we approached the main counter, the gentleman at the desk informed us he also had tickets available for the taping of Jay Leno, which started at the same time as the tour. We briefly hesitated but decided to stick with the tour. I am glad we did. After paying our $15.00 (tickets are only $8.50 each, and we had an AAA discount which saved us a dollar each), we waited until 2 PM for our tour to start. Appropriately enough, while we waited, we watched the Days of our Lives on the TV monitor in the lobby (the highlight being that EJ DiMera (James Scott) had just discovered that Sydney (Hailey and Lauren Sinnema) was not his, and Carly Manning (Crystal Chappell) made her first appearance, stabbing Lawrence Alamain (Michael Sabatino). At 2 PM our tour guide appeared, and guess what? We were the only 2 people on the tour. After a brief introductory film, our tour began (unfortunately, cameras were not permitted inside the studio). Our guide gave us some basic information. Apparently, since the merger with Universal, there is not too much actual filming at the studios. The Tonight Show no longer films there since Conan O’Brien took over as host. However, the new Jay Leno Show does film there, along with Access Hollywood, the local NBC affiliate, and some Telemundo shows. Other than that, the studio seems to have been pretty much taken over by Corday Productions. The name is everywhere, stamped on all of the props, sets, and scenery.”

Parkhurst continued, stating, “Once the tour guide realized I was a Days of our Lives fan, that pretty much became the focus of our tour (I actually knew far more about the show than she did). The first stop was the prop storage area. Pretty much any prop ever used has been kept. A new flashback may need to be filmed at any time, and the props used need to match what was used during the original taping of scenes (rabid fans have been known to write and complain if the sets and props in newly filmed flashbacks don’t match what the characters used originally). Some of the items I was able to see – knick-knacks and utensils marked “Maggie’s kitchen,” household items labeled “Dr. Jonas,” decorative objects that stated they were for “Kate’s bedroom,” and an entire pallet of styrofoam headstones, including one for Tom Horton. Even the small wooden cross used when Jennifer Horton “died” to help capture Peter Blake was there. We then moved to the soundstages where filming actually occurs. We were only able to look into the soundstages, not actually enter them, but we could see enough to make out the Dimera parlor and part of the Horton household. Apparently, there are very few “permanent” sets. Most of the sets consist of 3 or more walls, on wheels, that can be rolled into place, and then dressed for whatever scene is being filmed. This allows for maximum flexibility, and also for sets to be used for more than purpose. This is not only economical but time-efficient, as the show tries to film at least 100 minutes of footage every day. This various footage from different days is then edited into one complete episode. The set people have this down to a science and can have an entire room set up in a couple of hours. When filming is done, the set can be broken down and the walls rolled away. Even “outdoor” sets are done this way. The “stone” is really fiberglass or painted wood, and the greenery is artificial. It is easy to switch from Salem Park to the cemetery by just bringing in some fiberglass headstones. There were also a couple of sections of actual airplane interiors, which can be dressed to look like a private jet or a commercial airplane, and a collection of doors, including one with a nameplate of “Jonas,” and Apartment 3B, Sami’s old apartment.”

Soap opera actors and crew members are among the hardest working people in show business, as new episodes air every day, there are no repeats. Parkhurst relayed, “The day usually starts about 8 or 9 AM, with hair and makeup, and costuming. They rehearse and go over their blocking in the first part of the day, and then usually start filming about 3 PM and work until sometime into the evening. Why do you rarely see soap opera stars in the gossip pages? Because they have no time for partying or late nights! Speaking of hair, make-up, and costumes, wardrobe and make-up were our next stop. They had an assortment of costumes on display, including the Marilyn Monroe inspired number Sami wore to serenade Franco on his birthday, and the circus costume worn by Jennifer when she was hiding out with Jack in the circus. The window into the costume shop is now covered, as apparently ambitious reporters for the soap opera magazines and websites were known to take the tour, just to spy behind the scenes and learn possible spoilers. They also had the Marlena Evans doll on display, which I was ashamed to admit to owning. Hair and makeup was the next stop. Many wigs were on display, including those worn by Celeste, and a Marie Antoinette wig worn by Marlena at the DiMera masquerade ball. Interestingly, many of the wigs contain horsehair, which is much more durable than human hair and will stand up to the harsh styling conditions used. Also, many of the actresses wear wigs on a daily basis, as it makes for much easier hair styling, and more easily allows for switching between different scenes on the same day. We saw the 2 wings of the studio where the star dressing rooms are. Unfortunately, we did not see any stars, although apparently we just missed Galen Gering (Rafe).”

In the final loop of their tour, Parkhurst says, “Finally, we were able to go outside to the set for Salem Place (cameras were welcome here, thank goodness). The marquee for the Salem Cinema was there (unfortunately not showing any movies, and looking a little worse for wear- it was pretty obvious they hadn’t used the Salem Place set in a while). But all the shops were there, including Ballistix, 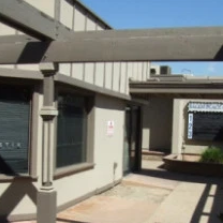 The Gift Box, and the Java Café. Interestingly, there are very few right angles used in the construction of any of the storefronts, allowing actors to walk in front of the shops while being filmed and not have to turn any corners, making Salem Place appear much larger on camera than it really is.

After taking our fill of pictures in Salem Place, our tour was complete. It was a great experience, really inexpensive, and a ‘must do’ for any Days of our Lives fan if you are ever in the Los Angeles area!