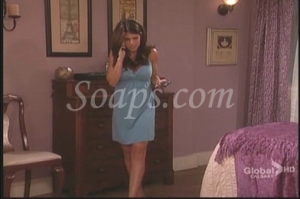 I hope that you all had more time to watch the show this week. We had two themes! One was sneaking around and the other was great one liners! Bradianna and Nathan and Mel snuck around to hide relationships that they shouldn’t have to hide, Nicole crept around to get Sydney’s passport at the DiMera manse, running into the great dame, Kate, while Carly slipped into the drug cabinet to steal drugs for Rafe. Plus, this was a great week for funny lines! Victor, Stefano, Brady and Chad all had some great fun with those around them, making a great balance, overall, in the show.

Romance on the agenda:

I was indifferent to Nathan and Melanie’s sneaking around, but enjoyed the scenes at the house with them and Maggie (sans tears). Still, I prefer the chemistry between Melanie and Philly. Maggie, who needs to stop tearing up whenever she butts in where her nose doesn’t belong -if she’s going to be a buddinski, she should own it – showed her old fashioned side this week when she asked Mel and Nate to have a hands off policy in her home. Sure, it’s her home, and she’s a lot older than me, with different morals, but they’re also 19 or older and not her kids. I thought she should have been more understanding and accepting, but that’s just me. Nathan was decent enough to offer to move out instead of Melanie, but where will he live?

Bradianna is back on. Partially why Brady wouldn’t help Nicole in the way she wanted him to. I thought that considering he still loves her, he was very strong to walk away. It’s good to see. Brady’s been so much fun with all those lines he was given this past week. “If we proceed? Sweep me off my feet, why don’t you?” So cute. I loved seeing Ari in her bedroom. Seeing her in her home made me feel she was more a part of Salem. Shame Victor’s bent on destroying their relationship, thinking she could rip open his underworld. He was smart to offer EJ the drug operation so that it’d get Ari off his trail. I enjoyed Ari and Roman’s scene at the pub. He sounded as though he had a cold or issue with his voice, but was still on top of his scene, making fun of Brady and Ari when Brady text messaged her. We learned Ari was in prison in the past. Chances are, she was in there for being a seller, considering the work she’s doing for Roman and Salem PD.

Non-romantic gesture at the pier:

Nicole’s whole week was a bad one, and sometimes I feel sorry for her but as a whole, I believe we make the choices in life for a reason. If we want a drama-filled, pathetic existence, we’ll have one. Trying to seduce Chad was sad and pathetic. At 30 something, her trying to seduce a 17 year old is just gross. Worse that he had been obviously playing her old porn DVD overandoverandoverandover and memorized her and that one line. He called her a hot, old nymphomaniac and refused her attentions, which was funny, but I didn’t care for the name calling that came afterward. I felt bad for Nicole and at that point, all I could see was a spoiled little self-obsessed brat in Chad, who thinks he’s better than her. Who is the fool, the one who paid to watch the porn or the one who was paid thousands of dollars to do the porn? Just saying… He should judge less, but he’s a kid so we’ll let it go. As well, I know in this case, Nicole was pressured and drugged to do porn, but that’s beside the point. I also thought it was nasty of him to use the term ‘washed up’. I used to work at a bicycle shop during University. I guess that makes me a washed up bike mechanic? *wink* I digress. I did feel that it was Chad’s right to go after custody of his own child, unlike half of Salem. I wouldn’t recommend it but it’s not up to me! Or Sami! I didn’t realize his parents knew about the baby and was glad to see a little support sent his way… I completely forgot the DA’s name and therefore it was a shock to me to learn who Chad’s father was, but a bulldog like District Attorney Woods, should be more hands on with his son, I would think, rather than just throw a business card at him for another lawyer to help get custody. Perhaps it’s because he expressed that he didn’t want his son to go after custody. Where’s the mother? Who is the mother? Why was he sent to boot camp to begin with and what’s his story and why is Sami involved in this? Perhaps if she had a job… and speaking of money, she went from searching through her handbag and Rafe’s wallet for ten dollars for pizza to having fifty-thousand dollars to give to Nicole – instead of saving it for her children’s University fund, or for food, for example. Can she be any dumber? I found that completely ridiculous. I don’t like when it feels as though the writers just threw that in there to shut us up about her getting a J O B. Even Chad and Mia have jobs… Speaking of Chad again, that whole mediation in Justin’s office made no sense to me, and I could have done without it, but did you see hot-headed-Chad fly across the table and attack Will? Nasty. Will should press charges. Sydney would be Nicole’s kid, then. Easy…but that’s likely not going to happen! (Apologies for the photo. It’s not easy to capture a good fight scene.)

The phoenix rose from his coma:

First, let’s start with EJ, who has been uber-frustrated as of late. His father’s his only friend, I realized, and I think he needs a pal or perhaps a little exercise in order to burn off some of that bad energy from all these flaky women he keeps company with. He was thrilled when Stefano woke up and he and Lexi told their old man about what’s been happening with Nicole while he’s been snoozing. He slipped up and called Sami Sydney's mother, but they chalked it up to confusion after the coma. None of them yet know that mess Nicole is on her way to Rio with Sami’s fifty grand and Sydney. Rio - Good timing. I guess she hasn’t picked up a newspaper! This must suck for the writers, who would have written this a few months back.

This past week I polled you all on how you felt about the baby switch storyline these days. The majority said they’re tired of it and wanted Ejami to learn the truth already.

Did some of you get the idea that Daniel was almost giddy to tell Chloe that she may not be able to have kids? Did you think that he should have told her as soon as he learned of it, instead of bedding her? I have been having mixed emotions about him lately. He’s so secretive, and when he calls Chloe ‘baby’ it grosses me out. I like him as a doctor, but still don’t find we know enough about him and he’s been on the show forever. Chloe, on the other hand, needs to show more emotions and spark my interest. She has no depth. It’s painful to watch.

I have a few questions. Perhaps you have them as well. Rafe almost drowned. He had or has hypothermia, so why the hell didn’t Omar bring him to University Hospital? Why did Carly give him antibiotics? What were they for? Can they get off the boat already? Get rid of Omar, who does nothing for me? Why does Rafe mumble about Sydney being Sami’s kid? Why doesn’t he just call her? Delirious? So many unanswered questions! I enjoyed Carly listening in on Bo and Lexi’s conversation. Now there’s somebody who can emote. She was amused by listening to him talk and I’m excited for them to reunite. Hope who? Just kidding. I think.

From time to time we ponder what could be:

Ever consider that if Sydney is really Sami and EJ’s kid, Mia’s kid, or somebody else’s kid? Dr. Baker took Grace from the room when she was born. He had ample time to switch any of the babies around.

Do you ever wonder if Nicole and EJ’s baby still out there somewhere? During labour, Nicole "hallucinated" that she gave birth to a daughter. Did she and did Dr. Baby-Broker-Baker sell it on her, or did she really die? Brady wouldn’t have known. There could be an Ejole kid out there.

I'm curious to know why Lawrence said, "You’ll never find…" to Carly, when he was dying? Was he talking about an item or a person? Incidentally, where is Nicholas Alamain? Last time we saw him, he was making out with Kate, in the 1990s.

Did everyone take a look at our newest Arianne Zuker interview? She discusses her on canvas baby, her own baby, and the secret to how come she emotes so well!

All in all, the week was a pretty satisfying one for me. I griped about the issues on the show for so long that it’s such a pleasant surprise to see the changes in Salem.

If you haven't already started following us on Twitter @soapoperafan, I'd recommend, considering that I post day before DOOL and The Young and the Restless teasers and other news items from all the soaps.