Days of our Lives Is Facing, Losing Cast Members — & How the Show Can Overcome Them 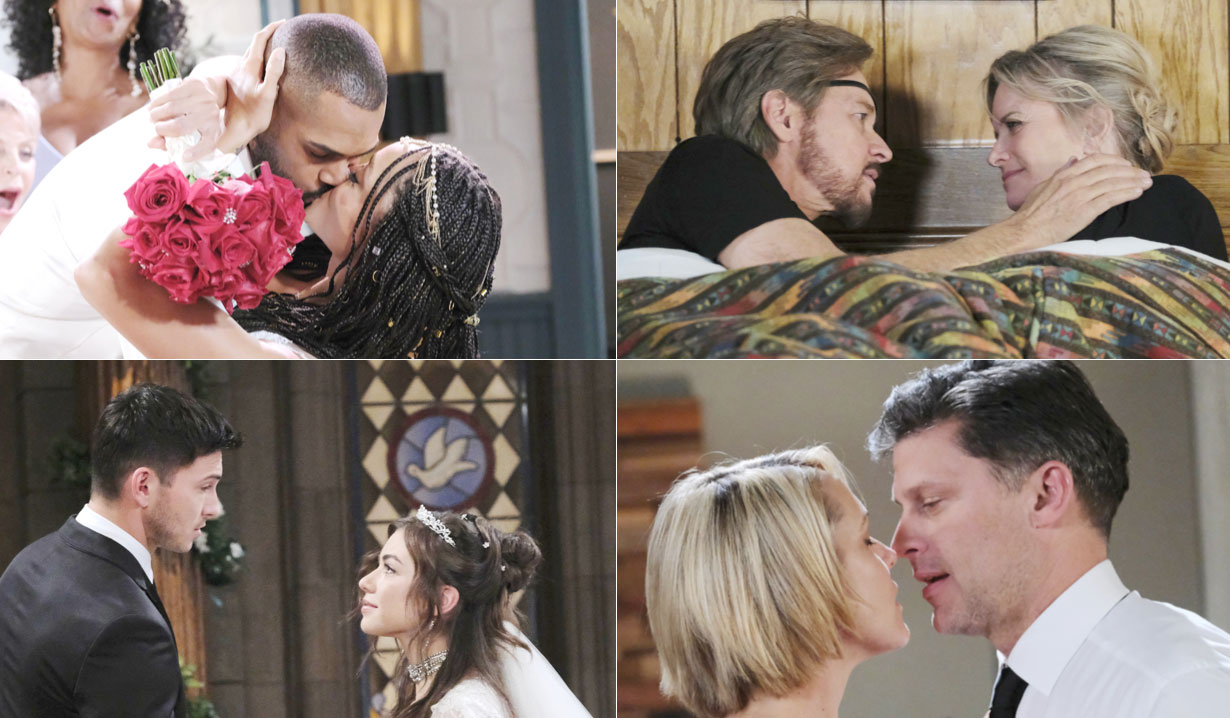 June and July on Days of our Lives saw epic weddings and reunions for several couples on the show. However, as every soap fan knows, happy couples are the kiss of death and the writers usually throw drama their way the second it seems like they will be together forever. Unfortunately, the drama often comes in the form of an affair or some other devastating loss or scandal that results in the couple breaking up and maybe finding their way back together down the road. We’re speculating on other ways Days of our Lives might be able to bring some drama and excitement into some of the show’s couples’ lives without completely destroying them.

Though Kayla Brady (Mary Beth Evans) was set to marry Justin Kiriakis (Wally Kurth), in the end, she reunited with her one true love Steve Johnson (Stephen Nichols). And while they aren’t married yet, it’s almost certain to happen at some point. What Steve and Kayla need is a good adventure storyline harkening back to their heyday in the eighties and nineties. With so many Days of our Lives actors exiting, it could be time to repopulate Salem. Steve and Kayla could go on a mission to track down one of their children. Perhaps either their son Joey (James Lastovic) or daughter Stephanie (Shelley Hennig) has gone missing and found themselves in a dangerous situation? There is also Steve’s son Tripp Dalton (Lucas Adams) who is supposed to be in medical school but could potentially be kidnapped by some of his mother’s family’s associates or enemies.

The Cin-sational Ben and Ciara

Ben Weston (Robert Scott Wilson) and Ciara Brady’s (Victoria Konefal) happily ever after has already been blown up thanks to a bomb at their wedding and Eve Donovan (Kassie DePaiva) orchestrating Ben’s kidnapping and torture. She also revealed her plan to have Ben kill his own wife to feel the pain she felt when he killed her daughter. This could be the true redemption story that Ben’s character needs, as some viewers still haven’t gotten past the fact that he was the Necktie Killer. It could also be the storyline in which Ciara has to really face down Ben’s demons alongside him. The scenes in the cabin where she had to talk him out of his hallucinations gave us a small taste of what a powerful storyline Ben having some sort of mental break could be. We know Victoria Konefal is departing as Ciara, but not whether the part will be recast. If they can make it through this crisis they could come out a strong couple, or Ciara could find herself dead by her husband’s hands.

Eric Brady (Greg Vaughan) and Nicole Walker’s (Arianne Zucker) wedding was over twenty years in the waiting for fans of the couple. Unfortunately, Greg Vaughan is one of the many stars exiting the NBC soap opera, leaving us wondering what will happen to this couple. Trying to keep a soap opera couple together when one half leaves the show and is written as always been somewhere off-screen simply doesn’t work. If Eric and Nicole don’t ride off into the sunset together, perhaps the show should have Eric presumed dead in a horrific accident of some kind. After time passes, Nicole could begin to receive mysterious letters and clues hinting Eric may not be dead, sending her and others on a search that leads them to Melaswen Island where Eric, now recast, is alive and well. This could result in a whole new storyline as to who has rebooted Melaswen Island and why? The answer… the crazy adopted DiMera, Peter Blake (Jason Brooks)!

Lani and Eli need a mystery

Let’s face it, Lani Price (Sal Stowers) and Eli Grant (Lamon Archey) aren’t the most exciting couple on Days of our Lives, but after all they’ve gone through, they deserve some happiness. More medical drama involving their unborn child would be downright cruel giving they’ve already lost a child, and nobody likely wants to watch them split up again. Given so many characters are leaving, perhaps a good old fashion whodunnit murder mystery that they can lead in investigating could be the story for them.

Let us know your own thoughts on storylines for these couples by joining the conversation in the comments. Be sure to sign up for Soaps.com’s newsletter to get all the latest news delivered to your inbox, and browse the gallery below of the actors set to exit Days of our Lives.

If Days of our Lives Recasts Eric...

Days of Our Lives’ Martha Madison...