Ahead of Greg Vaughan’s Days of our Lives Exit, a Look Back at the Life and Loves of Eric Brady 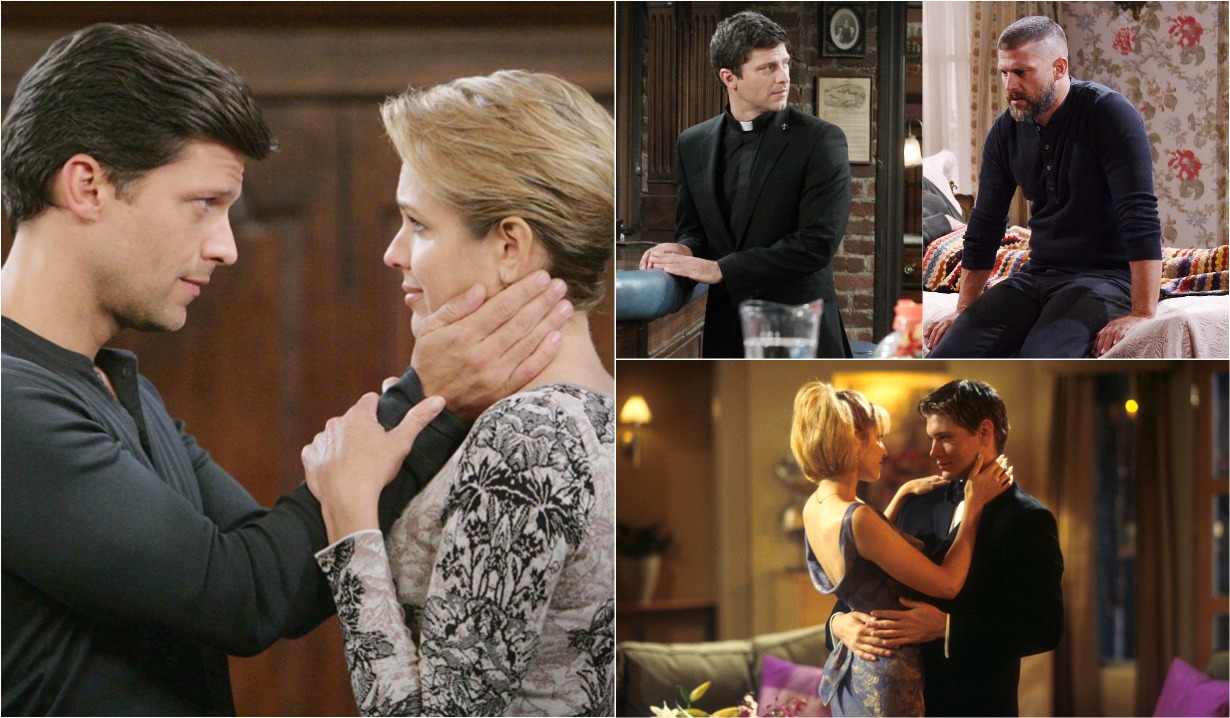 Days of our Lives character has had one common thread throughout his time in Salem.

Days of our Lives Eric Brady is one of the kinder, gentler characters in daytime television, though he’s been known to fall in love with the same women as other men in the family, like his half-brother, Rex Brady (Kyle Lowder) and stepbrother, Brady Black (Eric Martsolf), and to hold a grudge.

Eric, along with his sister, Sami Brady (Alison Sweeney), was sent away to school in Colorado as a youngster. Sami returned to Salem first, with Eric coming home later, only to find himself in hot water with his sibling after helping to expose her lie about the real father of her son, Will.

As a young man, Eric fell for Nicole Walker (Arianne Zucker) but their love faced numerous obstacles through the years, as is wont to happen in soap operas. Nicole’s past was an issue, which sent him into the arms of another woman, and there were other partners, deceptions which one or the other couldn’t forgive, and the not insignificant matter of Eric becoming a priest.

Eric’s life has been marked by difficulties, as he struggled with nightmares after spending time in Africa and was drugged and raped by Kristen DiMera (then Eileen Davidson). Eric turned into an alcoholic at one point and was responsible for the death of Dr. Daniel Jonas (Shawn Christian), which landed him in prison (though he was pardoned) and set him adrift in a sea of guilt.

The one thread throughout everything has been Eric’s love for Nicole, however, from the time the character was played by Jensen Ackles, who went on to fame for his role on Supernatural, to the present, when Eric and Nicole finally married and his current portrayer, Greg Vaughan, has confirmed his exit from the NBC soap opera.

While it’s unclear what Eric’s exit storyline will hold or exactly what date will be his last on the canvas, Days of our Lives has new episodes filmed to air into the fall.

In the meantime, take a look back on the life and loves of Eric Brady by viewing our gallery below. Be sure to sign up for Soaps.com’s newsletter to get more features, photos, and soap news delivered straight to your inbox.

<p>Eric returned from Colorado to Salem as a young man, and along with Mike and Carrie, revealed Sami’s secret that her son Will was Lucas’ child and not Austin’s. Eric regretted causing his sister pain but she forgave him.</p>

<p>Eric met Nicole when she was a waitress at Java Cafe and decided she’d make a great model for Countess Wilhelmina where he was working as a photographer. They became romantically involved.</p>

<p>Eric’s relationship with Nicole became strained due to issues from her past, as well as Eric being preoccupied with his sister, Sami’s murder trial when she was accused of killing Franco Kelly, and he began spending time with Greta Von Amberg. When she realized Eric still loved Nicole, Greta broke things off, and Eric decided to leave Salem.</p>

<p>Nicole was stunned to see that Eric had returned to town and was now a priest and had joined St. Luke’s in Salem. He offered Nicole a job and a place to stay at the convent.</p>

<p>Eric began experiencing nightmares due to terrible things he had witnessed while working as a photographer in Africa. Nicole helped him cope and their feelings for one another continually grew, though he wouldn’t break his vows.</p>

<p>When Kristen blamed Marlena for her break-up with Brady, she took revenge by drugging Eric and raping him. He was hospitalized after, and his memory gradually began to come back. Unfortunately, he accused Nicole of raping him before Victor Kiriakis got a hold of Kristen’s video and played it as she was about to marry Brady.</p>

<p>Eric was kicked out of the church on the heels of his sex scandal with Kristen, and Nicole and Daniel worked to clear his name. Nicole found evidence that would allow him to re-enter the priesthood, but hid it from him when they became engaged. Ultimately, Jennifer told Eric the truth about her deception before she could convince him to elope.</p>

<p>While unable to forgive Nicole, and unwilling to return to the priesthood under the circumstances, a love interest from Africa, Serena, turned up in Salem and wanted to get back with Eric. However, she was entangled with a diamond scheme, which brought trouble to him and Nicole. After rescuing Nic from Xander, he confessed his love. Serena was killed by the Necktie Killer.</p>

<p>Eric began drinking after Serena’s died and Nicole chose to be with Daniel. He was driving under the influence when involved in an accident that took Daniel’s life, hurt Jennifer, and nearly killed Brady as well. Eric was hospitalized for an infection.</p>

<p>A guilt-ridden Eric had a one-night-stand with Jennifer, who wound up addicted to painkillers following the accident. Eric turned himself in and was sentenced to five years in prison.</p>

<p>Eric was pardoned for stopping the Governor’s daughter from taking her own life. He rescued Hope when she escaped from prison and helped her to clear Hattie’s name. She realized he still had feelings for Jennifer.</p>

<p>Once back in Salem, Eric was unable to convince Nicole to forgive him for his role in Daniel’s death. He began dating Jennifer, but when she kept a secret about Nicole from him, he dropped her. Eric came to Nicole’s rescue a couple of times before she disappeared with her daughter, Holly, and was presumed dead.</p>

<p>Eric developed feelings for Sarah Horton, who had been cheated on by her husband, and his half-brother, Rex. By the time they finally admitted their mutual feelings and were ready to marry, Nicole and Holly were discovered alive, and Sarah let Eric go. When it was revealed that Sarah had given birth to his child, and not Xander’s and that Nicole knew the truth, Eric forgave Nicole and stood by Sarah’s side as the baby fought cancer. Unfortunately, the baby turned out to be Brady and Kristen’s daughter, and had been swapped for Eric and Sarah’s dead baby by Xander.</p>

<p>Eric got down on one knee and proposed to Nicole, and the two were finally married in a summer ceremony. Though they became husband and wife, it wasn’t without drama as Eric’s niece, Allie, had turned up pregnant. Sami followed and started a cake fight with Nicole at the nuptials.</p>

The Days of our Lives Youthquake...

Days of our Lives Kristian Alfonso...