Greg Vaughan’s Final Days of our Lives Story: Will Eric Get a Happy Ending or One That Will Break Our Hearts? 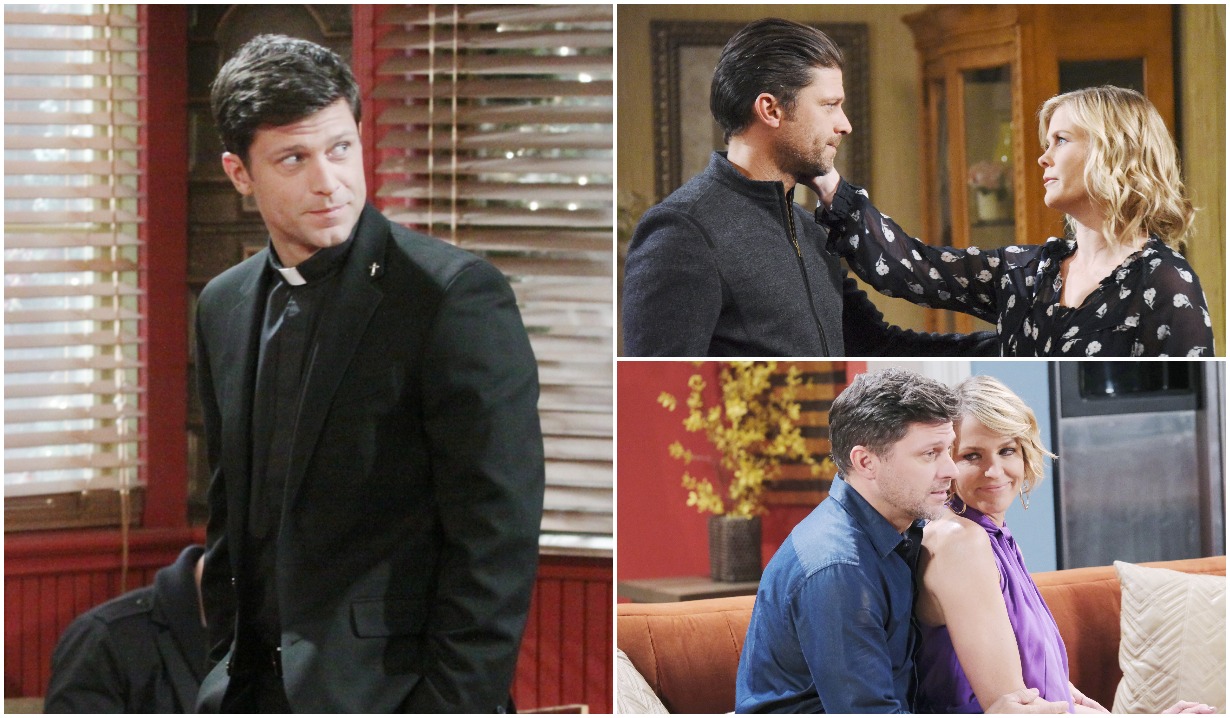 If we can’t keep Eric on the canvas, can we at least hope for a future return?

We should have known that when Days of our Lives finally allowed Eric Brady to walk down the aisle for the first time, it was the beginning of the end for the character. After all, the poor guy has never been able to catch a break, a fact that long predates Greg Vaughan stepping into the hunky hero’s shoes.

That doesn’t, however, make it any easier to say farewell to Vaughan or his alter ego, especially at a time when so many other Salemites are also on their way out. But say goodbye we must. The only question remaining is exactly how the character we’re pretty sure inspired Fleabag‘s sexy priest will be written off the canvas this time around. Given that we’ve already speculated about Ciara’s exit as well as that of her mom, Hope, we couldn’t resist the challenge presented by this latest departure.

If there’s one thing giving us a glimmer of hope, it’s the words of Vaughan himself. “It’s never over,” he said in revealing his plan to leave the soap he’s called home since 2012, “so I’m not going to say it’s over, but I’m taking a break, if you will.”

So while we don’t yet know whether Eric will bid Salem adieu forever or for now, here are a few suggestions as to the storyline which might facilitate Vaughan’s exit!

1. Eric Leaves to Be By Sami’s Side

When Allie needed to get away from her mom, she ran immediately to dependable Uncle Eric. Sami may not have loved that, but she also knows that her brother is exactly the kind of influence that her children could use in their lives. Perhaps realizing that caring for EJ has caused her to take her eye off the parenting ball, Sami might consider asking Eric to join her in Europe and help where her other children, Johnny and Sydney, are concerned. (Heaven knows with parents like Sami and EJ, the young’uns could use all the guidance they can get!)

Speaking of Sami, what if Eric’s twin needed more than just a babysitter? Were she to be stricken with a life-threatening illness that required of Eric anything from the shirt off his back to a kidney transplant, he’d be there for her in a heartbeat. We’re not saying he’d go as far as The Bold and the Beautiful’s Storm Logan, who you’ll recall shot himself in the head so as to provide sister Katie with a new heart, but short of that, there’s not much Eric wouldn’t do for the woman with whom he once shared a womb. And as we all know, sometimes things don’t go as planned during risky operations…

There was a time when Eric had to choose between the two loves of his life, Nicole… and God! While he seems very happy with the decision he made, what if the newly-married couple began suffering issues in the bedroom? With the help of a therapist — anyone but his mom, Marlena! — Eric might come to realize that a guilty conscience is, er, taking the wind out of his proverbial sail. With Nicole’s reluctant approval, Eric could head for a religious retreat to do a little soul searching. Would he come home (perhaps with a new face) or trade his wedding ring for the priest’s collar he hung up not so long ago?

4. Eric Gets a Blast From the Past

There’s a big chunk of Eric’s history we don’t know much about. Longtime viewers will recall that he and Sami grew up in Colorado, where they were sent after Marlena’s supposed death. (Sorry, that would be her 1987 death. You have to be specific when you’re talking about the residents of Salem, many of whom have risen from more graves than Dracula!) And it was to Colorado that Eric returned in 2000, staying for over a decade after having his heart broken by Nicole. Who’s to say that during his time there, he didn’t meet a lovely young lady who has, all these years, pined for the one who got away while caring for a living, breathing souvenir he unwittingly left behind? That’s the kinda news that just might cause a guy to make both life-changing decisions and travel plans.

With so many actors leaving the canvas, the last thing we want is to add another name to the list. But Eric and Nicole fans who waited literally two decades for the couple to become husband and wife might find the pain of losing him easier if when he left, she was by his side. To be clear, Arianne Zucker has no plans of going anywhere (that we know of), and Vaughan’s exit will create a whole new world of storyline possibilities for Nicole. But it’s hard to deny that it would be downright lovely to know Eric and Nicole were out there, somewhere, enjoying their hard-won happiness.

Contemplate how you might like to see Eric written off the canvas and leave your suggestion in the comment section. Meanwhile, spare a thought for the woman Eric will likely leave behind and peruse our gallery of men who could help heal Nicole’s broken heart, why don’t you? Or pore over some past exits we thought we’d never get over, among them those of Days of our Lives‘ James Scott (ex-EJ) and Peter Reckell (ex-Bo), in the photos below.

The Days of our Lives Youthquake...