Allie’s Baby Daddy on Days of our Lives Is [Spoiler]! 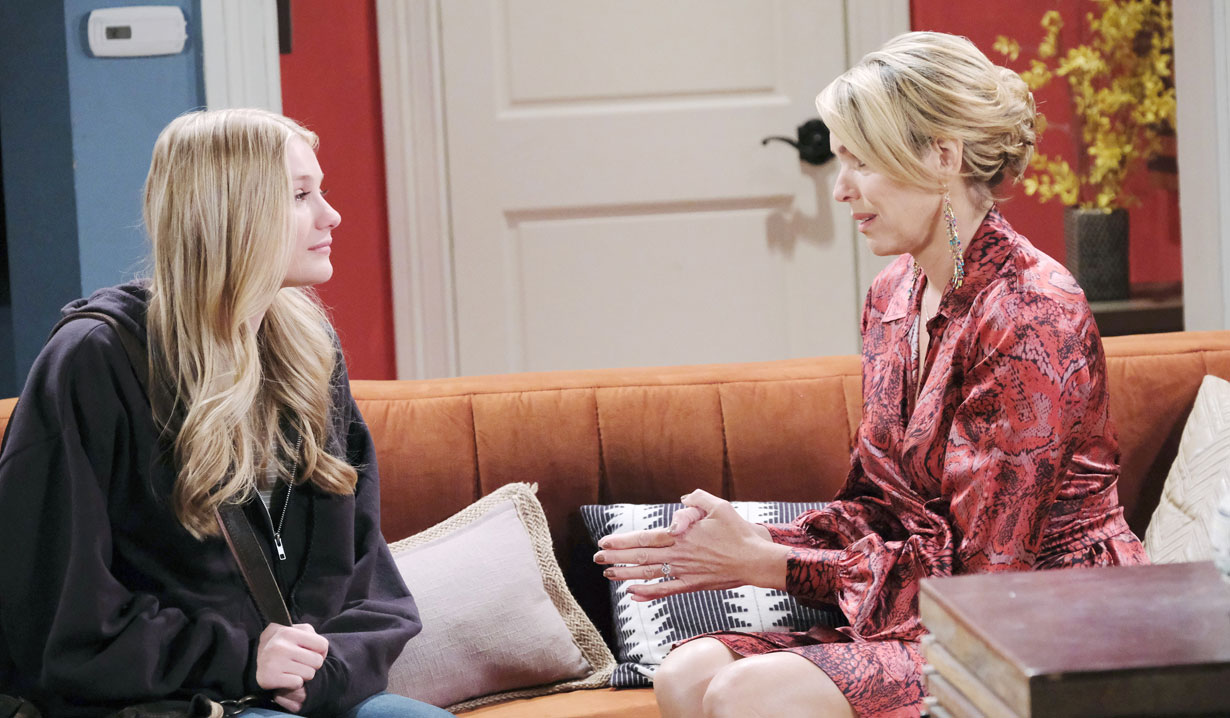 Well, at least he’s probably one of the guys on our shortlist!

Lindsay Arnold debuted as a SORASed Allie Horton on the June 10 episode of Days of our Lives in which a pregnant Allie turned up on Eric’s doorstep. The same day her father Lucas Horton (Bryan Dattilo) arrived in Salem desperate to find his daughter, who had been given a credit card to globe-trot by his mother Kate Roberts (Lauren Koslow). Allie thought she, and her secret pregnancy, would be safe with her Uncle Eric (Greg Vaughan) and Nicole Walker (Arianne Zucker), but Lucas quickly located his daughter in town and was shocked to find she was pregnant. Allie begged everyone not to tell her mother Sami Brady (Alison Sweeney) because Sami would only want to further control her life.

As everyone agreed not to tell Sami for the time being, Nicole began to question Allie about the choices ahead of her. Allie decided she wasn’t going to have an abortion – I mean, she was too far along anyway – but admitted she wasn’t ready to be a mother. Nicole brought up the baby’s father, and Allie immediately shut down, saying he would be of no help. She was also afraid to reveal his identity. Interesting! Nicole agreed to let the topic go for the time being. Eventually, Allie decided to give her baby up for adoption to someone she knew. She initially asked Rafe Hernandez (Galen Gerring), only to learn her brother Will Horton (Chandler Massey) and his husband Sonny Kiriakis (Freddie Smith) was interested in adopting the child. Before she could come to a decision, her mother arrived in town to crash Nicole and Eric’s wedding and was furious to learn Allie was pregnant and had kept it from her. Sami was further surprised by Allie’s plans to give the child up for adoption to someone in their family.

Browse our gallery below of potential suspects of who we think could be the father of Allie’s baby. Then sign up for the Soaps.com’s newsletter to have the latest news delivered to your email.

<p>Perhaps the reason Allie fled to Salem and was desperate that Sami never learn she was pregnant was that Sami’s own husband and her step-father EJ DiMera is her baby’s father. Hey, it wouldn’t be the first time a daughter seduced her mother’s husband on a soap opera. </p>

<p>Stefano DiMera constantly has children coming out of the woodworks, even after his death. It wouldn’t be shocking if Dr. Rolf impregnated Allie with some of his DNA. Maybe Allie doesn’t even know Stefano is the baby daddy.</p>

<p>Chad and Abigail DiMera spent a good deal of time in Europe where Chad ran the French office of DiMera Enterprises in Paris. He could have crossed paths with Allie. We know she was wildly drinking and partying in Europe, and maybe a drunken night with Chad resulted in a baby… a night he doesn’t even remember.</p>

<p>The son of Abe Carver and his late wife Lexie Carver, Theo was last said to be in South Africa for a new stem cell trial after a shooting incident involving JJ Deveraux left him unable to walk. It’s possible he’s fully recovered and decided to explore Europe in celebration, only to run into a partying Allie.</p>

<p>Tripp Johnson, the son of Steve Johnson and Ava Vitali, could be another potential father. Last we heard he was moving out to California to study to be a doctor. But he might have taken a little vacation to Europe and had a fling with Allie. </p>

<p>It’s been ages since we saw Mimi’s younger brother and Bonnie’s youngest son Connor Lockhart. With Bonnie back in Salem, it might not be that much of a shock for Connor to turn out to be the baby daddy. It would also create another connection between Lucas Horton and Bonnie.</p>

<p>Chloe Lane is returning to Salem soon, and she’ll no likely be bringing her son Parker, whose father was the late Dr. Daniel Jonas. They easily could age Parker and have him turn out to be the father of Allie’s baby. That would be interesting seeing Lucas, Allie’s father, and Chloe are exes. </p>

<p>Born John Thomas Brady, he was the believed son of Hope Brady and John Black, from when she seduced mercenary John as Princess Gina. However little JT, as he was called, was neither John nor Hope’s child. Stefano switched Hope’s actual son Zack with a baby that Lexie and Abe were set to adopt, initially believing JT was his son from a tryst with Princess Gina. JT was actually the son of Glen Reiber and his ex-girlfriend, who was going to give the child to Abe and Lexie. Glen was eventually given custody of JT when the truth came out and left Salem with the boy and his girlfriend Barb. </p>

<p>With both Vivian Alamain and Ivan back in Salem, we wonder if Allie’s baby could belong to Nicholas Alamain, who hasn’t been seen in quite some time. Nicholas was the secret child Carly Manning had with Lawrence Alamain and never wanted him to know about. Vivian told Carly that the child had died, but then secretly raised him as her adopted nephew. Eventually, Lawrence learned the truth about Nicholas. </p>

<p>It’s entirely possible that Allie’s baby daddy is none of the others and is a completely new character. It’s just as possible she has no idea who it is thanks to her partying and drinking. </p>