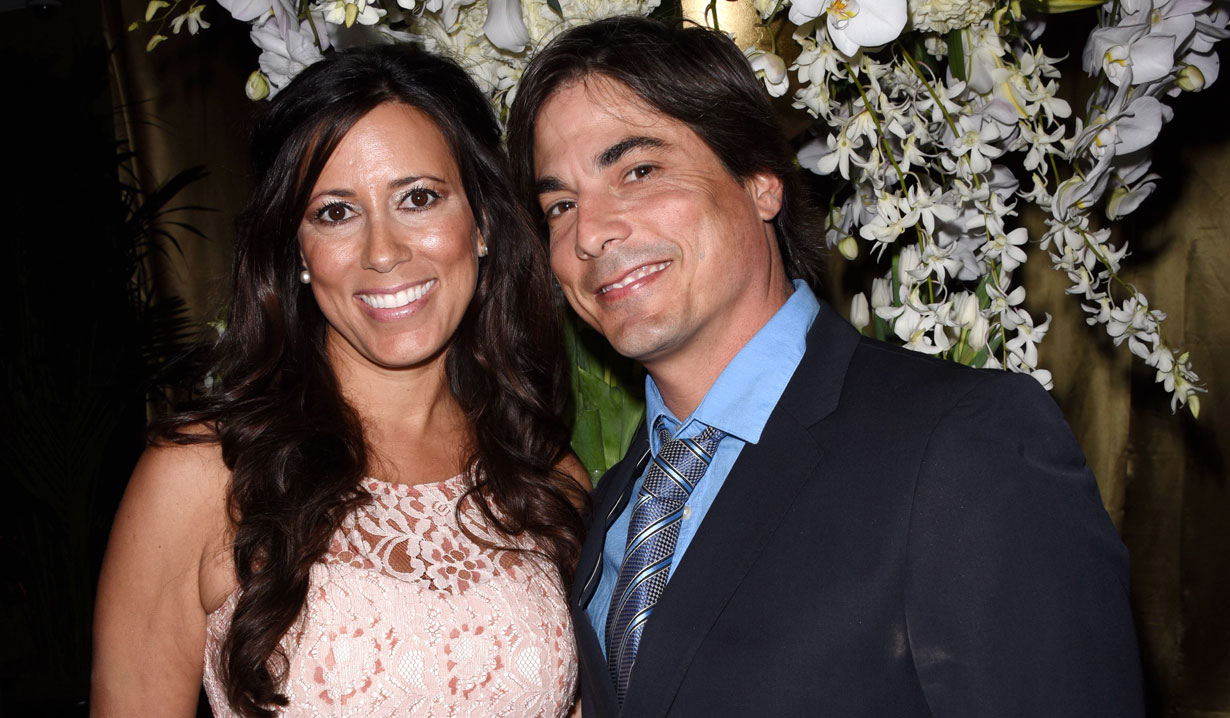 Days of our Lives actor is a proud family man.

Days of our Lives Bryan Dattilo, Salem’s Lucas Horton, wished his wife Elizabeth Cameron a happy anniversary. In a selfie on Instagram of the couple he wrote, “9 years ago today I married the most patient women in the world. Thanks for dealing with me and my ways. Love you always.” Datillo and Cameron were married on July 12, 2001.

9 years ago today. I married the most patient we women in the world. Thanks for dealing with me and my ways. Love you always

The couple has one child together, daughter Delila Cameron Dattilo born on June 11, 2014. She came into the world at 3:00 AM, and Dattilo had to report to the Days of our Lives set the next day at 7:00 AM. When she was born the couple decided to bank her umbilical cord blood because the stem cells can be used to treat Lymphoma and Leukemia and Delila has grandfathers on both her mother and father’s side who had a history with the illnesses. The cells are also available to Delila should she ever need them in the future. Datillo recently posted a hilarious video voicing his daughter’s dolls in order to keep her entertained, and she can be heard giggling in the background.

Dattilo also has a son, Gabriel Bryan, from a previous marriage to Jessica Denay. Gabe, as he is called, has a highly functional form of Autism and lives with Dattilo, Cameron and his sister. Dattilo was active in coaching the sports teams Gabe played on growing up, and they are also involved in Autism Awareness charities and programs. More recently Gabe has begun to model, even appearing in New York Fashion Week. In an older Instagram posted he bragged about what a stud his son was.

Datillo joined Days of our Lives in 1993 and has played Lucas on and off over the years. He caught the acting bug at the age of nine and took acting lessons along with his older sister Kristen Dattilo, who is also a working actress. She’s appeared in The Chris Isaak Show, Dexter and The Office among other television shows and movies.

Browse our gallery of other Days of our Lives stars and their spouses below, and then subscribe to  Soaps.com’s newsletter to get all the latest news sent to your inbox.

<p>Bryan Dattilo (Lucas Horton) has been married to Elizabeth Cameron since July 12, 2011. In 2014 the couple welcomed their daughter, Delilah Dattilo. Dattilo was previously married to Jessica Denay and they have a son, Gabriel. Gabriel has high-functioning Autism and is involved with Autism charities and raising Autism awareness. In 2020 Dattilo welcomed his grandson, Alexander Gabriel Dattilo.</p>

<p>Lauren Koslow (Kate Roberts) has been married to Nicky Schillace since 1987. Schillace is a make-up artist and has worked on <em>Days of our Lives.</em> The couple has two children: Emilia Katari Koslow-Schillace, Zachariah Koslow Schillace.</p>

<p>Galen Gering (Rafe Hernandez) has been married to his wife Jenna since 2000. The couple has two sons, Dillon Phoenix, and Jensen Gering. The couple also appeared together on E!’s reality show <em>Dirty Soap.</em></p>

<p>Freddie Smith (Sonny Kiriakis) and Alyssa Tabit became engaged in July 2018 and married in December of 2020. They have been dating since 2011. After departing<em> Days of Our Lives</em> they relocated to Florida. The couple also hosts a podcast together.</p>

<p>Kassie DePaiva (Eve Donovan on <em>Days of our Lives</em>) and James DePaiva (most recently Dr. David Bensch on <em>General Hospital)</em> met on <em>One Life to Live</em> where they played Blair Cramer and Max Holden. They have been married since 1996. Along with their musical backgrounds, the couple shares a son, James and Kassie’s step-mother to Dreama, James’ daughter with ex-wife Hee Haw actress, Misty Rowe.</p>

<p>Paul Telfer  (Xander Kiriakis) is married to Broadway actress Carmen Cusack. Cusack is known for playing Elphaba in the Chicago, North American Tour and Melbourne productions of the musical <em>Wicked</em>, as well as originating the role of Alice Murphy in the Broadway musical, <em>Bright Star. </em></p>

<p>Shawn Christian (Dr. Daniel Jonas) and Arianne Zucker (Nicole Walker) have been dating for several years now and live together. They recently became engaged in 2021. Zucker was previously married to <em>Days</em> co-star Kyle Lowder (Brady Black and Rex Brady) from 2002 until 2014, and they share a daughter Isabella Reese Lowder. Christian was previously married to Deborah Quinn from 1996 until 2013 and they have a son, Kameron Christian.</p>

<p>Eric Martsolf and Lisa Kouchak have been married since 2003. They have two sons together, twins Mason Alan Martsolf and Chase Evan Martsolf. When not acting, Martsolf is producing music with his band Counterpoint. Kouchak appeared in the 2000 film <em>Beautiful.  </em></p>

<p>Melissa (Jennifer Horton) and Scott Reeves (Ryan McNeil on <em>Young & Restless</em> and Steven Webber on <em>General Hospital</em>) have been married since 2000. The couple lives in Nashville and have two children, Emily Taylor Reeves and Lawrence David Reeves and recently became grandparents.</p>

<p>Drake Hogestyn (John Black) has been married to Victoria Post since 1986. The couple has four children together: Ben Hogestyn, Rachael Hogestyn, Whitney Hogestyn, Alexandra Hogestyn. Their son Ben has followed his father’s footsteps into acting, appearing in small roles on both <em>Bold & Beautiful</em> and <em>General Hospital. </em></p>

<p>Marci Miller (Abigail Deveraux) is married to Ryan Matteson who runs an organic farm-to-table business called KaleCart. In March of 2021 they surprisingly announced the birth of their daughter, Willett James Matteson, who was delivered during the midst of a blizzard in Denver.</p>

<p>Lucas Adams first television role was a one-day part as Wesley in 2012 on <em>Young & Restless</em>. He was cast as Tripp Dalton on <em>Days of Our Lives</em> in 2017, but prior to that while working on Disney’s <em>Liv and Maddie</em> in 2015 he met fellow actor Shelby Wulfert, who would become his girlfriend. The two became engaged in 2021.</p>

<p>Casey Moss and True O’Brien met on the set of <em>Days of Our Lives</em> where they played couple J.J. Deveraux and Paige Lawson. The NBC soap opera was Moss’ first acting job, while O’Brien was a model prior to joining the soap and appeared in Justin Beiber’s video “One Time.” The couple has been dating since 2015.</p>

<p>Nadia Bjorlin’s (Chloe Lane) was her first major acting role. On the soap, she met Brandon Beemer (Shawn Brady), and the two were in a long-term relationship for seven years. After their relationship ended in 2013, in 2014 she met Grant Turnbull, a property developer, and home builder. The couple married in May 2015 and have two sons, Torin Mathias and Viggo Sebastian.</p>

<p>John Aniston joined <em>Days of Our Lives</em> in 1985 as then villain Victor Kiriakis. However, he was originally on the show as Eric Richards from 1969 until 1970. He next appeared as Eddie Aleata on the soap <em>Love of Life </em>as where he met his future wife Sherry. Before returning to <em>Days</em> he played Martin Tourneur, on <em>Search for Tomorrow </em>in 1979. He shares a daughter with his first wife Nancy Dow, actress Jennifer Aniston (<em>Friends</em>), and son Alexander with Sherry.</p>

<p>Stacy Haiduk is no stranger to daytime, having plated Hannah Nichols on <em>All My Children</em>, crazy Patty Williams and Dr. Emily Peterson on <em>Young & Restless,</em> and currently Kristen DiMera and Susan Banks on <em>Days of Our Lives. </em>She’s been married to Bradford Tatum since 1997. The couple met on the set of <em>SeaQuest DSV </em>on which Haiduk played Katherine Hitchcock. Tatum is an actor and author, best known for his role as Michael Hubbs in the cult classic, <em>The Stoned Age. </em>They have one daughter, Sophia. </p>

<p>Judi Evans got her start on daytime as Beth Raines on <em>Guiding Light</em>. She was then cast as Adrienne Johnson Kiriakis on <em>Days of Our Lives </em>and currently plays the character’s look-a-like Bonnie Lockhart. She also played Paulina Cory Carlino on <em>Another World </em>and Maeve Stone on <em>As the World Turns. </em>She married Michael Luciano in 1993 and they had son Austin Michael Luciano, who tragically died suddenly in late 2019 at age 23.</p>

<p>James Reynolds has played Abe Carver on <em>Days of Our Lives</em> since 1981, and is the only actor to portray the role. He briefly left to play Henry Marshall on the NBC soap <em>Generations </em>in 1991<em>. </em>He has a son, Jed, with his previous wife Laura Toffenetti. He’s been married to his second wife, Lissa Layng since 1985.</p>

Days of our Lives' Ben Without...

Days of our Lives Rumors: Gabi...

Tokyo Olympics Full TV & Streaming Schedule: How To Watch Everything On NBC & Peacock, Including Two Days Of Track & Field – Update