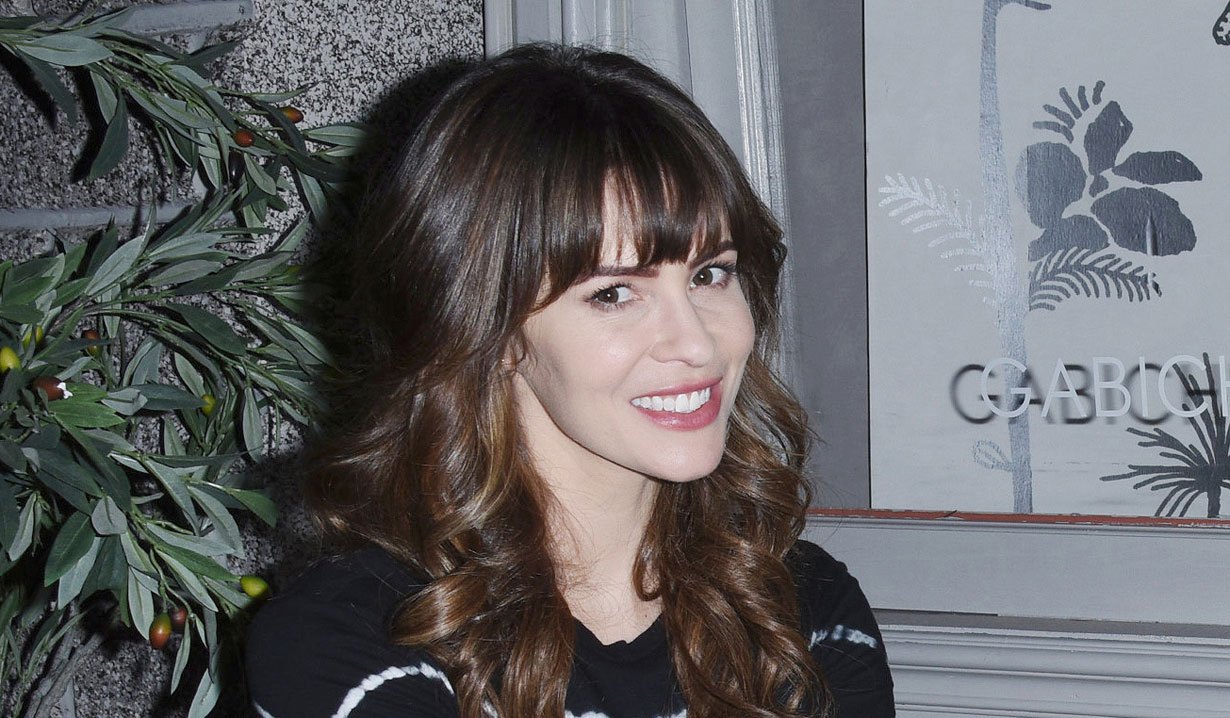 We’re in awe of Linsey Godfrey (Days of our Lives, Sarah; The Bold and the Beautiful, Caroline). At just 32 (as of July 25), the actress has played two characters who’re spectacularly unlucky in love, but in real life she’s had experiences worthy of her own soap opera. Through it all, she’s proved to be a fighter, whether the cause is her own health or the rights of children around the world. So what is it that makes Godfrey so special? Here’s what we found out, just in time for her birthday…

Raised in Stuart, Florida, Godfrey caught the acting bug after replacing a sick student in a production at her high school. She was discovered by an agency after entering a state thespian competition and moved to California with her mom to head out on auditions. She’s still super-close with her mom and posted a picture of a special tattoo in February, as well as one from her daughter Aleda. “My momma’s handwriting, I got it for her birthday,” she wrote.

My momma’s handwriting, I got it for her birthday. And my sweet Aleda baby’s handwriting ❤️ now I always have them with me. Thank you @winterstone!!!

Tattoos are clearly important to Godfrey, who had the Roman numeral “3” emblazoned on her wrist 10 years after she went into remission from Hodgkin’s lymphoma. She was diagnosed in 2006 and completed treatment in seven months. She posted a picture of the tat and wrote, “This tattoo was because I was stage 3 Hodgkin’s Lymphoma. And I kicked its ass! But I never forget how hard I fought and how lucky I was to be surrounded by the most spectacular family and friends! And here we are, 10yrs later! … Thank you everyone who supported me and made laugh. I love you all very very much!”

This tattoo was because I was stage 3 Hodgkin's Lymphoma. And I kicked its ass! But I never forget how hard I fought and how lucky I was to be surrounded by the most spectacular family and friends! And here we are, 10yrs later! #cancerfree #fuckcancer Thank you everyone who supported me and made laugh. I love you all very very much! 🙌❤😍

She has four Daytime Emmy nominations — three for Bold and Beautiful (2014, 2015, 2016) and one for Days of our Lives (2019). If nothing else, she should win an award for being able to laugh at herself: She’s posted this behind-the-scenes video from Bold and Beautiful twice on Instagram, once at 2015 and last year, which features her taking a tumble on set. “Haha,” she wrote. “That’s me laughing on the way down!”

Since the love of my life posted a video of himself being clumsy it felt only right that I should post one as well! To this day, this is my favorite video of me! Haha! That’s me laughing on the way down!

Life is a cabaret

Her sense of humor comes naturally; she’s a budding stand-up comic and has performed on stage and in sketch comedy with her pals. Do not miss her YouTube videos… but warning, things may get a bit racy!

In 2013 she and boyfriend Robert Adamson (The Young and the Restless, Noah) announced they were expecting, and Godfrey gave birth to Aleda on June 12, 2014. This year, she posted an adorable photo of herself with the toddler, sharing ice cream, for Mother’s Day, writing, “Here are some photos of me and my smush eating ice cream and my super casual pool lounging.” Godfrey and Adamson called it quits in 2015 and she’s been dating actor/comedian Breckin Meyer since 2017.

Best Mother’s Day weekend ever! Not pictured is my sweetest perfect perfect @breckinmeyer who is the photographer ❤️ so instead here are some photos of me and my smush eating ice cream and my super casual pool lounging. Bugsy Boo, thank you for making my Mother’s Day special, again! I love you so so much and our girls! Breakfast in bed, bath, watching some shows without anyone saying my name and then a pool day?! Handsome boy, you are a dream! I’m so grateful for you. Thank you again for making my day so special! And of course big old thank you as well to my sweet Ledybird!! ❤️🦄🦖🤖 Also massive thank you for the ice creams cones! 🍦 ❤️😘

In 2015, Godfrey was hit by a car and suffered from two broken legs while walking down the street when she was hit and pinned under the vehicle. Adamson tweeted, “She is going to be ok. Thank you. Already charming her Dr’s and Nurses. She’s been through worse than this and she’ll be back on her feet before we all know it. She’s the best girl and the best momma, and soon this will all be a distant memory.”

She is going to be ok. Thank you. Already charming her Dr's and Nurses. She's been through worse than this a… http://t.co/hEsfa1Nkg1

Godfrey posted a picture of herself with little Aleda in the hospital, writing, “She gave me pre surgery cuddles and then took a nap. Now I feel ready for anything. She’s the reason to stay strong and keep on fighting!”

She gave me pre surgery cuddles and then took a nap. Now I feel ready for anything. She's the reason to stay strong and keep on fighting! My ❤️

And she was back at work (though on an abbreviated schedule) less than a month after the accident!

In 2019 she stirred up some controversy by tweeting that she’d once had an abortion, and had no regrets. “I just simply wasn’t in a place, financially or emotionally to take that on,” she wrote in a Tweet. “I was and still am glad I had that choice because that’s exactly what it was, it was my choice, my body.”

I had an abortion. I just simply wasn’t in a place, financially or emotionally to take that on. I was and still am glad I had that choice because that’s exactly what it was, it was my choice, my body. #YouKnowMe

That’s not all she’s an activist about, either: Godfrey is a celebrity ambassador for the International Network for Aid Relief and Assistant (INARA), which provides medical care for children in conflict areas around the world. “As a mother, future step mom and aunt, I love all my kids. I would do anything for them,” she said on the NGO’s website. “Children should be allowed to live their lives and be children without bothering with the destructive and dangerous acts of men. I am so honored to be joining an organization that is dedicated to making a true difference in the lives of these children and their families.”

Look through our gallery below, which features Godfrey and Breckin Meyer, as well as other Days of our Lives actors and their real-life partners, then get all the latest headlines and news by signing up for Soaps.com’s newsletter.

Chrishell Stause, in Mourning for...