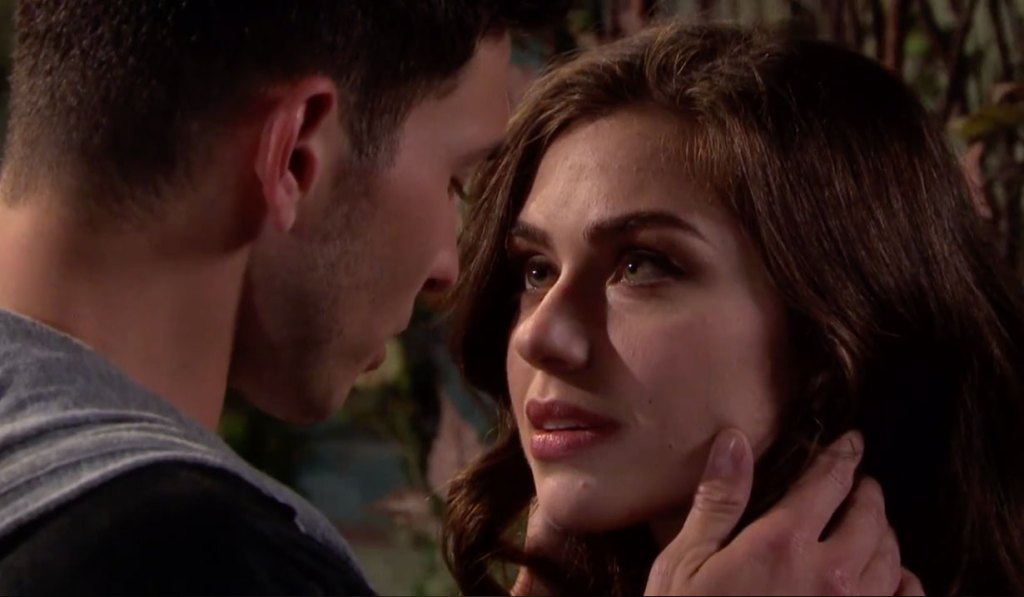 To become a writer, Ciara has to re-write her history with Ben.

Soaps.com has been writing fan fiction pieces to keep readers entertained and engaged. With production set to resume on two soaps, we hopefully won’t be waiting too long to see our beloved soap characters. In the meantime, this fan fiction piece features Ciara Brady (Victoria Konefal) landing a big opportunity – but at the expense of her and Ben Weston’s (Robert Scott Wilson) history.

In her and Ben’s suite, Ciara smiles, flashing back to meeting with Titan Industries publishing division. Ciara had started writing a book based on her life three months ago. It began as a hobby but found she had so much to say – from sharing her Dad, Bo’s, lessons to her harrowing encounters with Chase and Claire, to finding Ben. Now, she was being offered a lucrative publishing deal. “I could be a real author,” Ciara marvels out loud.

Later, Ben arrives home to find Ciara lighting candles. “What’s all this?” Ben asks, smiling. Ciara rises and wraps her arms around his neck. “I wanted a special evening for us because today, I got a publishing deal.” Ben’s eyes widen. “Are you serious? Baby, that’s incredible!” He lifts her off her feet, swinging her around. “I am freaking out right now!” Ciara laughs, breaking away and clasping her face. “A book deal!” Ben smiles. “You are amazing,” he says, stroking her hair. Ciara closes her eyes as Ben presses her against him, his lips traveling to her neck…

Later, in bed, Ciara sighs blissfully. “I’m so satisfied right now,” she muses. Ben laughs. “Glad I could be of service.” Ciara playfully swats him. “That’s not the only reason. I finally found something I could be really, really good at, you know?” Ben turns serious. “Can I ask you something? What did you write about me?” Ciara smiles. “I wrote the truth – that you rescued me, stole my heart, and now we’re getting married.” Ben becomes suddenly pensive. “Maybe you should cut me out – I don’t want bad publicity for you.” Ciara sits up, astonished. “Ben, how can you suggest that? You are my story.” Ben takes her hand. “I don’t want my past to screw this up for you.” Ciara kisses him. “It won’t, you’ll see.”

A week later, the first draft of Ciara’s book arrives. She and Ben sit on the bed and start skimming the chapters. “Wait,” Ben says suddenly. He takes the manuscript from her hand, frantically turning the pages. “What is it?” Ciara asks. “Check out your last chapter – ‘Seduced by a Serial Killer,'” Ben says. Ciara’s mouth drops. “I did not write that.” She scans the pages. “They re-wrote some passages – they are making it seem like you brainwashed me,” she says, astonished. Ben holds his head in his hands. “I was afraid of something like this.” Ciara jumps up and whips out her phone. “They won’t get away with this.”

15 minutes later, Ciara comes back into the suite. “What did they say?” Ben asks nervously. Ciara takes a deep breath. “They said that unless I go with the re-write, they won’t publish the book.”

Will Ciara publish the book, knowing it portrays her and Ben in a negative light? Or will she refuse and lose her big opportunity? Share your theories below!

Enjoy the gallery below of Days of our Lives real-life spouses.

Days of our Lives' Alison Sweeney &...

Days of our Lives Long Time...