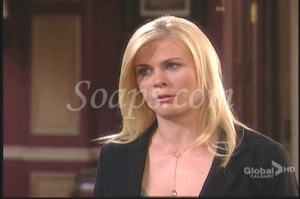 The show, once again, was entertaining and interesting the whole week through. I was a little puzzled by Chloe this week. I thought Chloe was useless with child-rearing and so did 41% of you in my last poll! When she first met Allie, she was uncomfortable and things were awkward, but we’re to assume they forged a relationship, off canvas. Chloe dumped Sydney off on Sami, when her best friend Nicole asked her to babysit. She had nothing to do, so we’re not sure what her motives were. It appeared as though she didn’t want to be saddled with a kid, for whatever reason. Later the same day, we saw Daniel talking with her on the phone. He mentioned her being upset. That led us to wonder if there really was something going on with her that would make her act like such a flake, but no. That conversation didn’t go anywhere and this week, Chloe started talking about having children with Daniel. He doesn’t want to get into a discussion about kids, which is rather silly, considering they’re about to marry. Couples should discuss important issues before they commit! Bottom line: She wants kids and Daniel’s hiding something.

Lucas has been in rehab and called Chloe once he got to step 9, which is making amends. He tried to make amends but then lashed out at her in anger and told her he doesn’t want her to see Allie again, then slammed the phone down. Somehow, I thought the 9th step was supposed to be gentler than that. Maybe he wasn’t ready to take this 9th step!

Chloe and Daniel are sure ready to have sex though and who can blame them? Though waiting was good for them to get to know each other a little, or allow us to get to know them without the sex, it was still ridiculous, considering they cheated in the past, but I understand Chloe wants to do it right… After finding out her annulment went through, she sulked for Lucas’ sake for a moment and then took a good look at those muscles of Daniel’s and couldn’t stand it anymore and they finally went at it. (Pardon my frankness but that’s how I saw it.)

Victor was so funny this week. If I can’t see much of my Melanie, Victor can make me laugh much the same. He agreed to stop calling Chloe degrading names, which is good to hear. Anyone can call anyone a dirty name. It’s more fun to be clever, so he was. He told her, “You’re fickle, insubstantial, disloyal and you eat men up and spit them out. But I have to be a part of Daniel’s life, which includes you.” Of course, later, he told himself that he was going to have a front row seat watching her self-destruct.

Hope, Bo and Justin are kind of a non-triangle, but Justin seems to be their go-between. It reminds one of primary school. Instead of Hope calling Bo to discuss sending Ciara to a boarding school, she contacts Justin, acts all ‘mysterioso’ and has him draw up papers to … what? Sign off on sending her there? I am completely clueless as to what the document was Bo signed. Did I miss something? Was it the papers to get her into the school? I’m baffled by this and by Hope’s strange behaviour. I’ve always liked Hope and right now, she’s acting so out of character. Usually it’s bad writing in soaps when fans say, “She’d never do that!” about a character that they’ve known well for years. The thing is, unless she’s Princess Gina again, characters can change as real life people can change, so is what Hope’s doing right now really that different from who she was in the past or is she merely tired of Bo and her issues with him? Otherwise, why beat a dead horse? I’m not sure what more time away from him could do to their marriage except hurt it. She brought up Patrick Lockhart, she brought up Bo hiding the fact that Chelsea was the one who ran over Zach, accidentally and told Bo that he could never accept that her perception in life was different from hers. Bo and I were standing there, arms crossed; looking at her as though she had two heads. When she said those words, I had to wonder if she’s the one who can’t accept that his perception differs or if neither of them can accept this in each other, but is it really this big of a deal that she should flat out leave him? She obviously loves him deeply and even said so. Their scenes together were very upsetting and though it could mean an interesting storyline ahead, I worry that there are no supercouples on soaps anymore. Is this the end of an era?

I gather that this is the last chance for us to see the little actress who portrays Ciara, considering she’s off to boarding school and will likely be SORASED upon her return – at some point. We haven’t seen this storyline in soaps for a while, perhaps since Nick Newman returned from boarding school on The Young and the Restless! I think it’s a good idea, frankly.

I’m still intrigued by Carly. She’s so strong and determined and DOOL needed a strong female lead for so long. Her acting is divine. Sorry. I’m fawning! She fished Rafe out of the water after he was in there less than a day, (which was a week for our viewing) and saved his life. He saved hers right back when a crew member, Brian, tried to take Carly’s life. Is he amnesic or will he remember who he is and will he be able to tell Sami about Sydney?

Poor Sydney. Poor EJ for that matter. EJ just can’t catch a break, can he? (James Scott can do frustration better than anybody!) Perhaps a weekend at a spa? He learned Mia gave Sydney to Nicole and that Chad, who suddenly has the name ‘Woods’ added to his surname, are the biological parents. Incidentally, I find it intriguing that he suddenly has this addition to his last name! I digress. EJ gave Nicole the boot a few times this week. The first night, she stayed at the Salem Inn overnight and acted as if it were a big hardship! I rolled my eyes when she met with Chloe and apologized for how unkempt Sydney appeared. She’s delusional and selfish. I say this knowing full well you’re all nodding and asking, "What’s new?"

I felt for straw-haired Sami, who seems to be Nic’s best friend right now. (That was some poor lighting on Friday's show. Her hair usually does not look straw-like but today? Meh!) She walked in on EJ and Nicole’s discussion concerning Sydney and automatically felt she needed to help Nicole. Really, it’s none of her damned business, walking into somebody’s home unannounced and then horning in on their argument, but I loved it. This is the Sami I love. Feisty! I bet the Ejamis were less than thrilled when Sami admitted if she had the chance to keep Grace from EJ again, she would. Way for her to kick the man when he’s down. Not that I didn’t see her point, but why fan the flames? They’re at a point where they are just starting to act civilly, and she probably should have left well enough alone, but instead, she said she’d do anything to keep him from her other children, even if it’s illegal. So if she finds out Sydney’s her child before EJ does, will she keep it from him? What if EJ were to find out the truth before her? He’d do the same! The twists and turns!

More twists… Sami thinks Brady’s in love with Nicole. So does Mel. It’s pretty obvious and he’s not denying it but he’s getting awfully close with Arianna again and I found their scene on Friday to be really sweet and funny. I know she’s better for him than self-destructive Nicole is, at the moment.

Speaking of self-destructing… Chad seems to be doing just that. He won’t listen to anybody about what’s in Sydney’s best interest. He should speak with his parents about this and he should be more careful with his posture. All that slouching drives me out of my head. Because I’ve such a bad back these past few years, I want to reach into the screen and straighten him up. PSA aside, Nicole seems to think Chad’s a spoiled brat. I suppose his demeanor shows how he wants what he wants and doesn’t care about the consequences, but he’s also a normal teenager. With fugly clothes. See my note to wardrobe in the photo to the left. He just learned he has a kid and didn’t give his consent to give the child away. Who wouldn't be angry and crazed? It’s a theme in this show to rob fathers of their rights and it’s really disgusting and I think Mia deserved his anger, but not the name calling, which caused Will to step up and go at Chad. Sort of. The conviction wasn’t there and I was disappointed, but when Mia dumped Chad and Will stood by her, holding her close and telling her he loved her, I couldn’t help thinking of him as somewhat of a hero. He’s a good guy. Chad I'd like to hold off of criticizing.

Again, overall, the week was great. The show is coming together just like Corday said it would. I was skeptical but it’s been three weeks in a row that I’ve enjoyed the show. How are you folks feeling about it? Feel free to leave me a message and let me know what stood out for you this week, what you enjoy and what's not working for you!

Soaps.com recently interviewed Arianne Zuker (Nicole) and we'll be posting that interview Monday. Until then, here are a few teasers of what she discussed!

* Nicole has been snacking onscreen to explain her weight gain.

* Ari and Kyle have picked out a baby name but aren't sharing it yet!

Happy Friday! Have a great weekend! If you're not already following us on Twitter, and I know thousands of you aren't, you should do so! Follow us @soapoperafan!

Days of our Lives Delayed in New...