Abigail DiMera’s 13 Craziest Moments on Days of our Lives 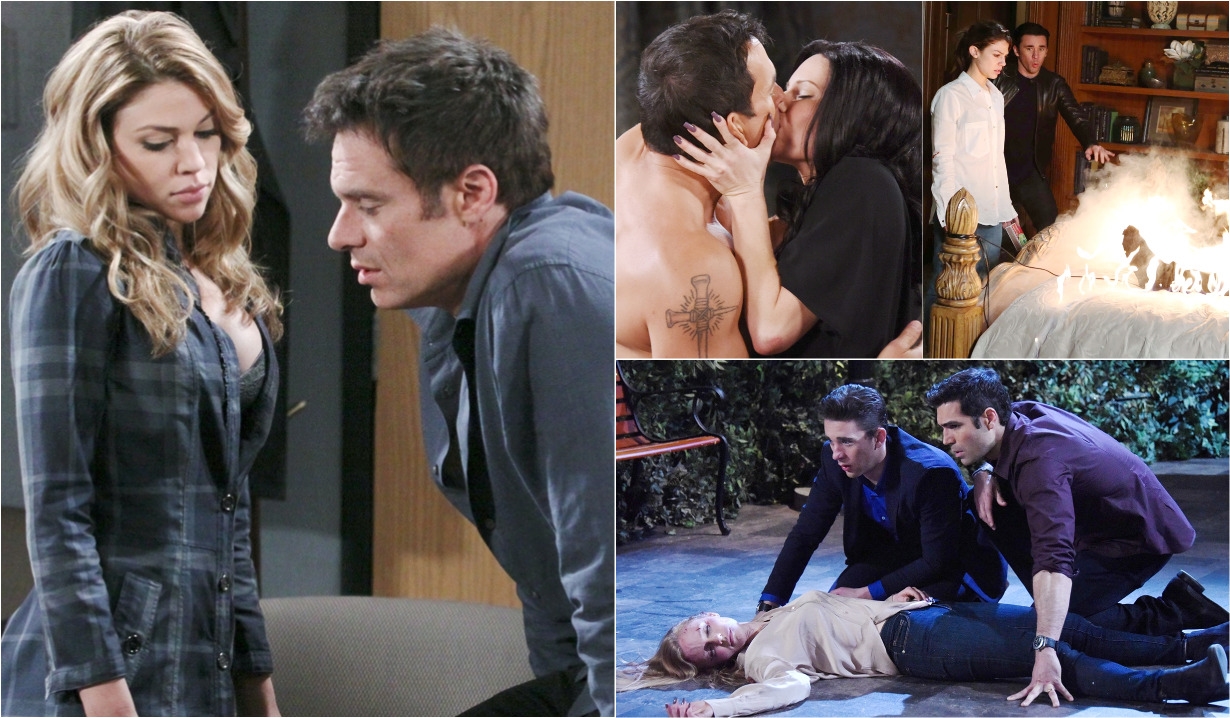 Days of our Lives character has had a wild life.

As the character of Abigail DiMera leaves Days of our Lives once again, we are taking a look back at the craziest parts of her life.

As a child, Abigail contracted aplastic anemia after drinking from a polluted well. Austin Reed  (then Patrick Muldoon) donated bone marrow, thus saving her life, but when her father Jack Deveraux (Matthew Ashford) realized he was responsible for the toxic dumping which resulted in the water pollution, he left town, devastated. Fast forward a few years…

While hanging out with Chelsea Brady (Mandy Musgrave, Rachel Melvin), Abigail (then Ashley Benson) indulged in drinking and smoking and helped Chelsea keep both her mother, Jennifer Horton (Melissa Reeves), and Chelsea’s mother, Billie Reed (then Julie Pinson), away from Patrick Lockhart (Brody Hutzler), whom Chelsea drugged and tried to seduce. Naughty girls!

Abigail later became obsessed with Austin Reed while working as his student assistant. When he got drunk over Carrie (Christie Clark) betraying him and passed out on the couch in his office, Abigail stripped and lay down beside him, and when he awoke later, she lied that they’d had sex. Carrie slapped her when she discovered the truth. 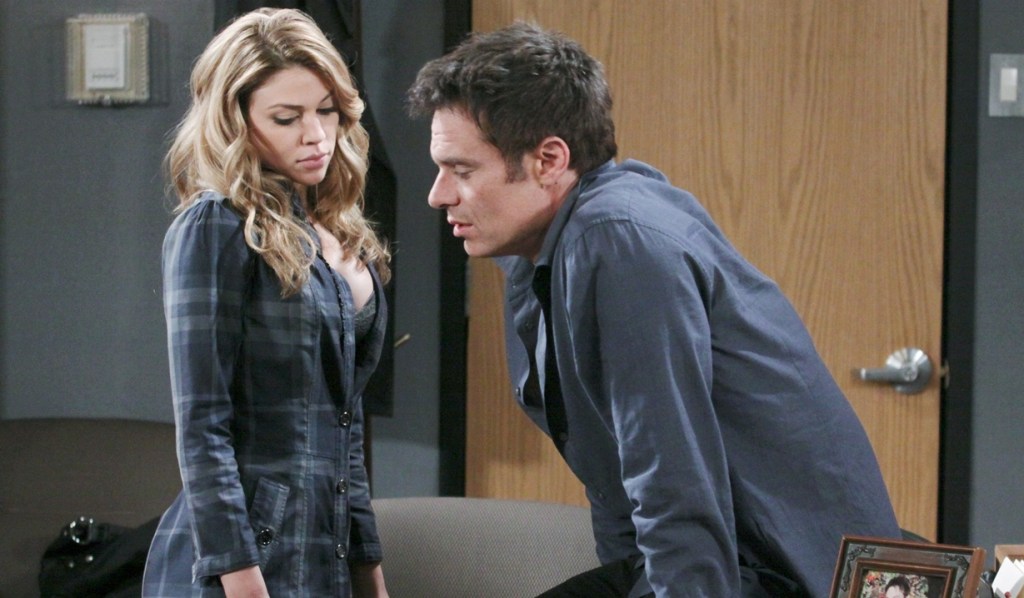 Things got even crazier when Abigail became trapped in an elevator after an explosion in the tunnels rocked the fundraiser she was attending. Her father, Jack Deveraux (Matthew Ashford), pushed her out and saved her, and was pronounced dead from the impact after the cables snapped and the elevator plunged. But we all know he wasn’t dead, because…Salem!

After Abigail’s boyfriend, Chad DiMera (then Casey Deidrick) decided not to return to Salem after life-saving heart surgery in Boston, she had an affair with his brother, EJ DiMera (James Scott) who was still involved with Sami Brady (Alison Sweeney). This was a huge twist that nobody saw coming…Sami had secretly discovered the truth when she saw them going at it in the shower and plotted revenge on Abigail by asking her to be her Maid of Honor and plan her and EJ’s wedding. She humiliated Abigail by revealing she knew about the affair and forced her resignation from the hospital.

When Chad (now Billy Flynn) returned to Salem, Abigail had sex with him though she was seeing Ben Weston (Robert Scott Wilson). She wound up pregnant and not knowing which man was the father. Ben’s father Clyde Weston (James Read) had the paternity test results doctored to indicate Ben was the father. Ben’s jealousy over her continued interest in Chad led to him to beat him almost to death and then commit murder multiple times, trying to frame Chad, and holding Abigail hostage in a cabin, where she delivered her baby. When Chad showed up to rescue Abigail, the two of them were left tied up in the cabin while Ben murdered the Doula, set the place on fire, and left with the baby. Chad saved Abigail and they resumed their life with their child, Thomas, after Ben was locked up.

Abigail started having Post Traumatic Stress Disorder because of everything Ben put her through. She thought she was hallucinating Ben at the DiMera mansion and Abigail tied Ben up and set fire to him after he escaped custody and showed up at the DiMera mansion. Chad put the fire out and Abigail was admitted to a mental institution where she set another fire. 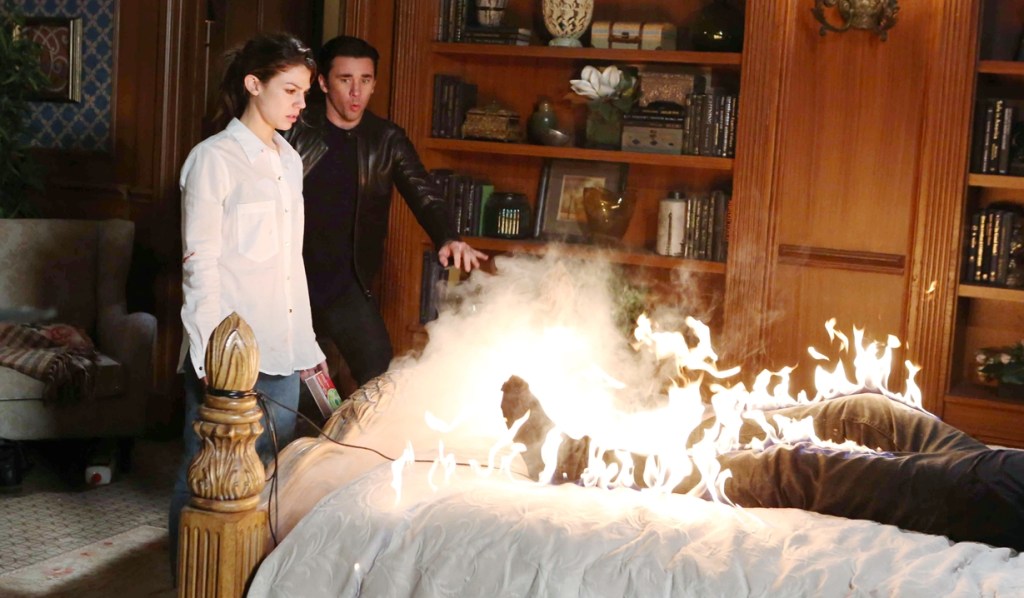 Abigail faked her own death with the help of Andre DiMera (Thaao Penghlis) but much later on, which is why it was so devastating when one of her D.I.D alters murdered him – but we’re ahead of ourselves…

When Abigail (as Marci Miller) returned to Salem, very much alive, Chad and Gabi were dating. Chad left Gabi and went back to Abby. They planned a vow renewal, but she and Gabi (Camila Banus) were abducted and poisoned by Deimos Kiriakis (Vincent Irizarry) before the ceremony. Abigail left Chad at the altar when the vow renewal finally came about, as she was convinced he and Gabi still shared a connection. She then divorced him.

Abigail and Chad married in a drug-induced haze at Eli Grant’s (Lamon Archey) party, thanks to Deimos spiking the punch, but later had it annulled and she married Dario Hernandez (Jordi Vilasuso) after he claimed he was facing deportation. Abigail ended up hospitalized in critical condition after she pushed Chad out of the way of a car that sped toward them, intending to take out Dario. She later divorced Dario.

Abigail and Chad reunited, but his brother, Stefan (then Tyler Christopher), moved into the DiMera mansion. Abigail developed D.I.D. and had two alters, Gabby and Dr. Laura. Gabby took up with Stefan, and when Abigail became pregnant, she didn’t know whether he or Chad was the father. She was committed again after Charlotte was born. The girl was eventually revealed to be Chad’s and Abigail was released and the pair remarried.

Recently, Abigail began having hallucinations and feared her D.I.D. had returned, but learned she had been drugged.

<p>Abigail, then known as Abby, hung out with Chelsea Brady as a teen. Abby participated in her friend’s schemes to land Patrick for herself.</p>

<p>When a drunk and disappointed Austin passed out, Abigail, his assistant, took advantage. She took off her clothes and joined him on the sofa, and later told him they’d had sex.</p>

<p>Abigail has believed her father to be dead numerous times, only to learn he’d been staying away. Though the two have shared some tense times, when Abigail became trapped in an elevator at a gala, Jack pushed her out to save her life, then ‘died’ when it plunged to the ground after the cables snapped.</p>

<p>Abigail took up with EJ, who was still involved with Sami. It made for an unsettling and crazy time in Abigail’s life when Sami decided to take her revenge.</p>

<p>Another crazy period in Abigail’s life came when she agreed to marry Dario, who claimed he was about to be deported. She still loved Chad, who she believed had connected with Gabi during the time Abigail had faked her death, and wound up in the hospital in critical condition after pushing him out of the way of a speeding car and taking the impact herself.</p>

<p>Abigail’s relationship with Ben took a dark turn when he became jealous over Chad and held her captive in a cabin. She was pregnant and didn’t know which man was the father. Ben forced her to give birth in captivity then set the place on fire after taking off with the baby.</p>

<p>Abigail returned the favor by tying Ben to a bed and setting fire to the room after he escaped and showed up at the DiMera mansion. She later set fires in her mental institution.</p>

<p>While back with Chad after her return from the dead, Abigail developed D.I.D. One of her alters, Gabby, took up with Stefan DiMera.</p>

<p>Abigail began having hallucinations and was hospitalized. She and Chad feared her D.I.D. was returning, but later learned she had been drugged. Abigail will have to leave Salem to seek treatment in Florida.</p>

<p>Back home once again, Abigail discovered she had a long-lost sister that even dad Jack never knew about. It wasn’t exactly a happy discovery as Gwen got pregnant after sleeping with Chad and then falsely blamed Abigail for her miscarriage. Abigail decided to take another time out from Salem shortly afterward.</p>

Kiss, Marry, Dismiss: Which Would...

Days of our Lives’ Jen Lilley...