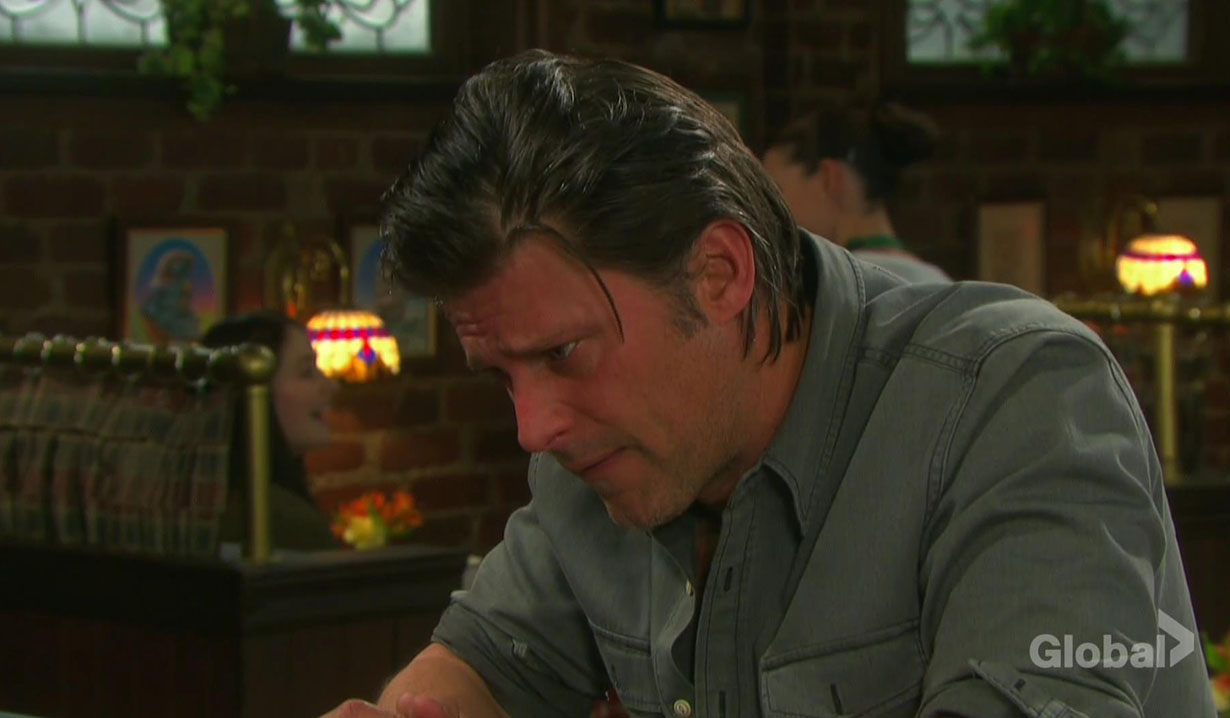 A grieving Eric and Kristen wind up in a lip lock.

Soaps.com is enjoying writing fan fiction pieces that keep our readers engaged with juicy storytelling. Last time we came up with fiction for Stefan appearing to Gabi – alive and since that and our other stories were well received, we came up with this piece which imagines Eric (Greg Vaughan) becoming surprisingly close with his old foe, Kristen DiMera (Stacy Haiduk).

Eric sits alone in the dark at the Brady Pub, exhausted from another long day searching for Sarah and baby Rachel. Tensions had been high at the Kiriakis mansion, the base of the search. Kristen turned on Brady, convinced he was to blame for the kidnapping. Eric ponders aloud, “But it’s not Brady’s fault, it’s mine. I should have known Sarah wouldn’t be able to cope. I’ve lost Mackenize and thanks to me, Brady has lost her too.” He storms out of the pub.

Eric heads to Kristen’s hotel room and bangs on the door. “Kristen, I need to talk to you.” Kristen swings the door open, clad in a silk robe. “What do you want?” she yells. Eric pushes the door open. “Kristen,” Eric pleads, “It’s not Brady’s fault Sarah kidnapped Rachel, it’s mine. I’m the one who convinced him to let Sarah and I say goodbye to her.”

Kristen steps toward him about to retort, when suddenly, she bursts into tears. “Oh Eric,” she wails. “How could this have happened? I thought she was dead! Now she’s alive and I still don’t have her!” Eric enfolds her in his arms, stroking her hair. “It’s alright,” he soothes.

“Brady and I aren’t even speaking. My daughter is gone…my world has fallen apart,” Kristen sobs. “Don’t blame Brady,” Eric says. Kristen pulls away abruptly. “But I wanted to go to the mansion that night and he kept convincing me not to. If he had let me be there, this wouldn’t have happened!”

“It’s going to be alright Kristen. You and Brady will get your daughter back,” Eric declares, placing his hands on her shoulders reassuringly. “Thank you for your kindness, Eric,” Kristen says, staring at him deeply. Suddenly, she flings her arms around him and kisses him passionately. Eric responds briefly but then breaks away. “What are you doing?” he gasps.

Before Kristen can reply, there is a knock at the door. “Kristen,” Brady yells. “Please let me in. I’m sorry for everything.” Horrified, Eric and Kristen stare each other…

What will happen when Brady finds Kristen with his brother? Will he figure out what just happened? Let us know your thoughts!

In the Days Spoiler Video, Gabi...