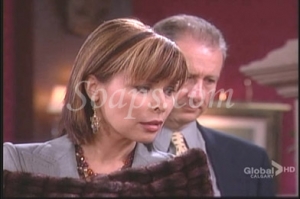 The week started out with a murder and a mystery when Carly stabbed her husband Lawrence. Before he died he said, “You’ll never find…” I thought it was sheer perfection. Find what? Find who? That was on our minds all week. I’m anxious to learn more about what has been going on between them all these years and what it is Lawrence is hiding from Carly. That’s well done by the show, because I didn’t watch DOOL 16 years ago, when their storyline was on front burner.

Bo is angrier at Hope more than ever this week. Since he has been off canvas this week for the most part, it helped me to visualize how he’s been stewing in his anger at Hope for not allowing him to talk to Ciara. That surprised me. It’s unlike Hope! Then on the same day Carly killed Lawrence and tried to call Bo, Ciara called to tell her daddy she loved him. Many are turning against Hope, surprising me. I’m not against her. I just disagree with her.

From his rehab room, Lucas sent Chloe annulment papers. Likely, Uncle Mickey had them drawn up. When she received them, Chloe felt guilty. Understandable. I would have felt the same, but Daniel’s right. Lucas a decision that’s good for both parties. It showed initiative, showed Lucas growing up a little. Chloe’s embarrassment at being caught by Philip, wearing Daniel’s engagement ring was spot on, too. I was glad that Philip understood her. I’m surprisingly looking forward to moving on from their marriage fiasco. It was good also, to see Chloe and Daniel on a date for once and I’m now glad they’re not having sex just yet. I want to see their relationship develop – sans sex! I did find Chloe’s balking at taking care of her best friend Nicole’s baby very un-friend like! When Nicole needed Chloe the most, she pawned off Sydney on Sami of all people, and ran away! My first reaction was to roll my eyes and call her a flake. That’s only because she usually stares blankly at everyone, so I can’t pick up any tell-tale signs of life inside her head. So I had to dig… I remember that when she was with Lucas, she was very uncomfortable around his kids. Then, after she left Nicole’s place, she had a conversation with Daniel, on the phone. Remember? “Back at the hospital, Daniel talks to Chloe on the phone. He notices she’s upset. She’ll tell him what’s going on once she gets there.” Since Chloe’s jobless and isn’t allergic to babies that I know of, I am going to assume that either she’s just very upset about what her friend did or perhaps there is another story behind this.

Kate Kate, Kate. Is she trying to get Stefano to kill himself? Her revenge for his part in Philip’s shooting? Stefano married Kate and in their pre-nup, he agreed to give her controlling interest in DiMera Shipping? Are you as surprised as I am? Are we up for another Phoenix “death” or what? Is he losing it? He’s just as bad as she is, eating all of that rich food, filled with sugar, all the while, knowing it could lead him to many issues due to his diabetes. I’m very confused over all of this. It’s like he has a death wish or is trying to set her up.

Now, I understand why Chia is together. I guess somebody had to hit me over the head, and that somebody was Mia. Mia explained to Brady why she and Chad were together – so he’d stop looking for their baby. How ridiculous. Very old school soap. Will knows Mia cares for him and he’ll soon learn the truth - that Mia’s only with Chad because of the kid. It’s a shame that this storyline is still a little flat and that the writers still haven’t had Chad come off as very likeable in other scenes.

EJ and Nicole’s scenes again this week were good as was EJ’s with Lexi, and Sami. EJ wasn’t over the top as much as he was with Sami, when he learned he was Grace’s father, after she died, but he did go nuts on Nicole. Let’s take a walk in EJ’s shoes and learn what he could be feeling. He’s a DiMera. He’s not like regular folk. He’s not as forgiving, but he still cares and he hurts. He already went through something similar with Sami, and he showed his anger and hurt by trying to take Johnny away from her. If it weren’t for Nicole, he probably would have succeeded. He’s still angry and bitter and hurting over Grace and now he learns his kid Sydney, really isn’t his. He just lost two kids, though I think Sydney’s still his kid, adopted or not. The woman he loves (and make no mistake - he does love Nicole) has been lying to him about being pregnant all those months, about not being able to have sex, about having his child… the list goes on. He’s in shock! The guy is disgusted with her! His first instinct seems to be getting rid of Nicole and Sydney. Hoping for ‘out of sight, out of mind’, possibly, but it won’t work. Nicole, is a fighter. When kicked down, she comes up fighting. Again. She’s not going to let Sydney go, which means we could be in for another twist. Highlight? I laughed at how Nicole threw Stephanie’s abduction in EJ’s face. After all, lest we forget who EJ really is! Now there’s only one more thing that he needs to learn about – that Grace wasn’t his and that Sydney is his with Sami. We’ll learn that before Arianne (Nicole) goes off on her maternity leave. So what does everyone think will happen once EJ and Sami learn that Sydney’s their kid? How will Rafe fit in? Hey, either way, at least Sami’s still looking for a job! That’s what I want to see.

Co-dependent- recovering-addict-Brady has lost his mind again and is back in love with Nicole, apparently. I hope we’re not into another triangle with Brady, Nicole and Ari. I’d like to see Melanie talk sense into him. Nicole’s a mess and I don’t want to see her with anybody right now, least of all Brady. She’d only hurt him!

Just as Nathan and Melanie are starting to get a little closer, it’s not Stephanie who barges in on their date but Philly, who just realized what Stephanie has known, that they’re not meant to be together. (Thank goodness!) Many seem torn on who my Melanie should end up with. I’ve always liked her with Philly, as you know. They’re a lot alike, but I do think she could bring Nathan out of his fuddy-duddy shell! She still has great chemistry with Brady but we know they’re not going to go with a Brelanie pairing. The only problem with a Mel/Philly pairing is that it would leave Nathan wide open for a pairing with Stephanie, who is just as dull as he is. Don’t get me wrong. I like Nathan, but that’s a fact, as our old friend John would say... though I may take that back after watching Friday's peep show when Nathan pressed Melanie's strategic buttons right at Cheatin' Heart! There's a bit of naughtiness to him after all. Me likes.

It was good to see Stephanie with Maggie, this week, working on the hospital fundraiser for AIDS. Well done! How ironic. Those living in the town of Salem don’t know what condoms are. Hello, Mia, Sami, Nicole? Not one of them has ever had an AIDS test to speak of. I’ll digress there. I don’t want to get started…

I’d rather dream about the long holiday weekend that I’ll be spending with those I love! Cheers to my fellow Canadian friends who are celebrating Thanksgiving Sunday or Monday and to everyone else who isn’t, have a wonderful weekend anyway!