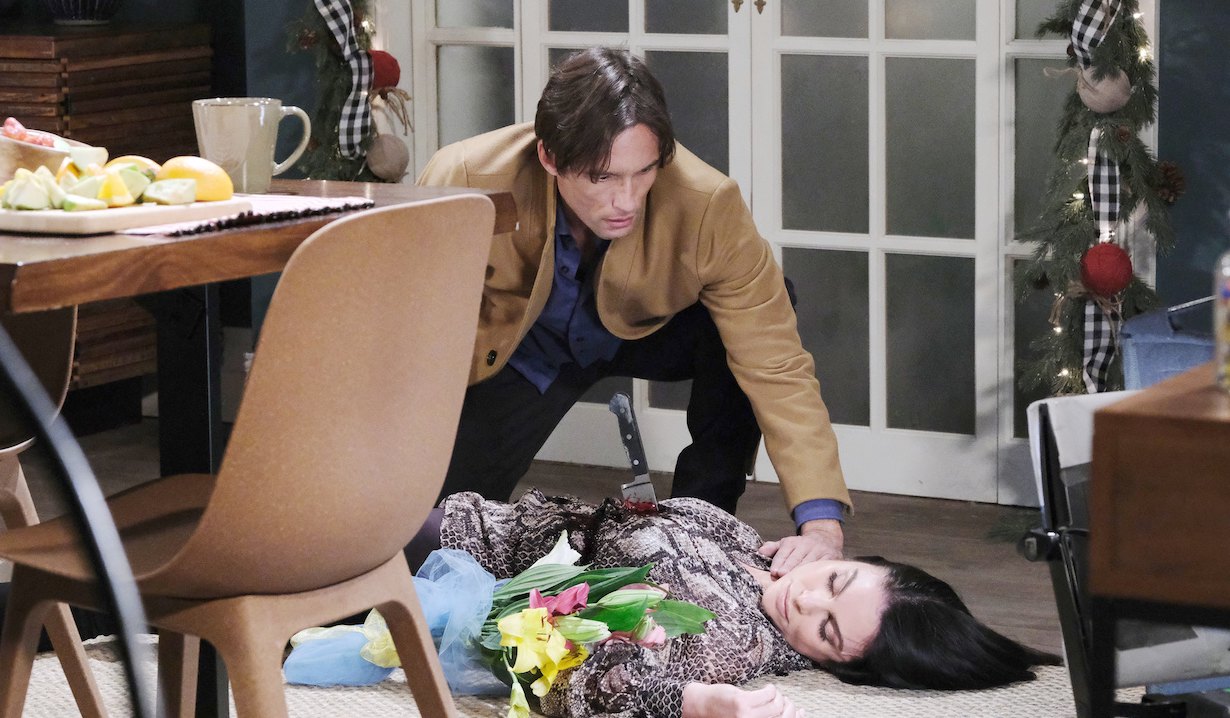 In the previous episode of the Days of our Lives digital series Last Blast Reunion, Kevin was attacked while cleaning up after the party. Soaps.com has this week’s episode recap where Philip and Belle get a devastating shock the following day.

The morning after the reunion, Chloe tells her parents at their kitchen table she went out for drinks with Philip after the 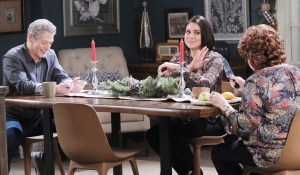 reunion. Craig recalls Chloe telling Philip she wasn’t interested in him romantically. Nancy, who is cutting apples, thinks she’s twisting the knife by leading him on. Chloe says it wasn’t like that. Besides, Mimi was with them, despite their not getting along. It was nice catching up with Philip, but Mimi kept interjecting herself into all their conversations. Chloe eventually gave up and came home leaving Mimi at the bar drinking the liquid courage to throw herself at Philip. 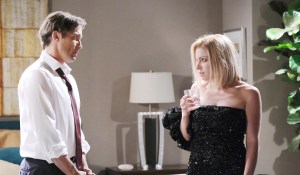 Still in her dress and one shoe from the previous night, Mimi jolts awake on a hotel bed. She sees Philip standing over her with a glass of water. She asks if they had sex. He assures her he slept in the chair. He just wanted to make sure she was okay. He adds his romantic interests lie elsewhere. Mimi reminds him Belle is taken. Philip admits he’ll always care about Belle, but the woman he’s interested in is Chloe. Mimi thinks he can do better, but he thinks there’s still something between them. He flashes back to his and Chloe’s teen romance. Mimi snaps him back to the present by reminding him Chloe rejected him. He recalls that was a long time ago. They’re both single now and life is too short. He’s going to tell her how he feels.

Shawn packs his bag to go back to Hong Kong in his and Belle’s hotel room. He tells his wife he wasn’t thrilled to find her in Philip’s arms at the party. She insists it was just a hug – it didn’t mean anything. Shawn thinks it meant something to Philip considering he brought up their affair. Belle asks if he trusts her. “Of course I do,” he responds. They exchange I love yous and he leaves for the airport. Belle looks at her tablet and sees the news about Kevin’s murder. Shaken, she calls Chloe.

Philip enters Chloe’s place. He sees her on the ground with a knife in her chest. Their relationship flashes before his eyes as he feels for a pulse. Belle enters. She frantically starts calling for an ambulance. He says, “It’s too late. Chloe’s dead.”

<p>Mimi passes out on a bed after the Last Blast Reunion. Philip brings her a glass of water. </p>

<p>A disheveled Mimi holds ice to her head. Philip teases her about drinking too much. </p>

<p>Philip declare’s he’s going to tell Chloe how he feels. Mimi looks disdainful while drinking a glass of water. </p>

<p>Chloe smiles as Nancy playfully points a knife in her direction. Craig laughs at his wife and daughter. </p>

<p>Nancy sits at the kitchen table with her family. She cuts apples while listening to Craig. </p>

<p>Philip finds a lifeless Chloe with a knife in her chest. He feels for a pulse. </p>

<p>Chloe lies lifeless on the kitchen floor. A knife is plunged in her chest. </p>

<p>Craig holds an emotional Nancy. They look to where Chloe was stabbed. </p>