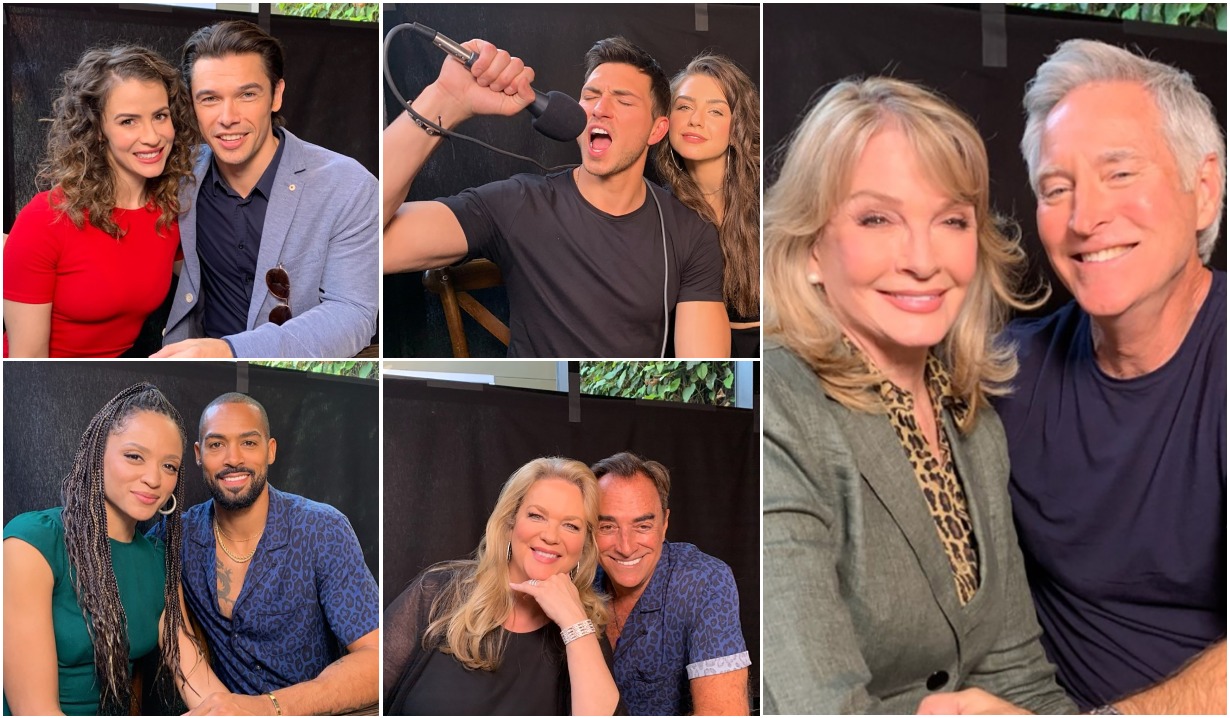 Days of our Lives Day of Days free fan event had a great turn out Saturday November 9 with various cast members in attendance and soap fans milling around to chat them up or get a photo with their favorite star. The biggest question on Soaps.com and everyone else’s minds was wonderment at the time jump which began Friday November 8 with Jack Deveraux (Matt Ashford) turning over an hourglass which moved us into a year in the future as Jennifer Horton (Melissa Reeves) woke up from her coma after a fall at the hands of Princess Gina Von Amberg (Kristian Alfonso). Days’ head writer Ron Carlivati spoke with TV Insider about the reason for the time jump, stating that “I have to admit, it’s something 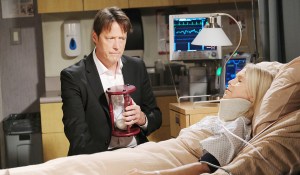 that I’ve wanted to do for a long time.” The scribe thought of it as “this idea of almost a reboot thing where you can suddenly just take stories to a new place. It allows you to jettison some stuff, start new stuff. And the exciting thing for me, and for the rest of the writers was just the creativity of it all. Just having to look at the whole canvas and think, “OK, if a year went by, what could have changed?” Upcoming teasers include John and Marlena being “separated in a way,” as we’ve stated in our Days spoilers, someone dies, the characters will look different. Carlivati previewed that there will be a Christmas in Salem, they will be “doing something big and fun at midnight” on New Year’s Eve, and some familiar faces are returning. Soaps.com’s Kristyn Burtt and was on hand to conduct interviews with the cast as AJ Martinson videoed the day for our readers. 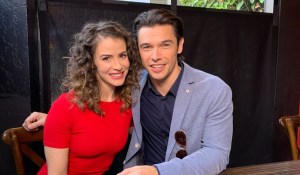 hearing rumors about the time jump and how they had to change their looks to suit the skipped year and how difficult it’s been for the hair and wardrobe team to keep the looks separate from the two timelines. They admitted they’re gossipy about everyone’s storylines and must get the scoop. Arianne Zucker (Nicole Walker) told Kristyn Burtt that she likes the idea of the time jump and calls it “an incredible feat.” Zucker talks about her emotional scenes and how she gets through those crying scenes. Greg Vaughan (Eric Brady) gets into how to track story direction and the challenges for Eric.

Kristian Alfonso (Hope Brady/Princess Gina Von Amberg) had fun discussing Princess Gina and Hope’s subtle differences and how Princess Gina was driven to kill Jennifer and recapture John’s love. Alfonso has called this past year a lot of fun and a challenge, exhausting and exhilarating flipping back and forth between Hope and Gina. Galen Gering (Rafe Hernandez) talked about Burtt’s photographic memory and how he deals with remembering dialogue and touched base on how he loves the time jump. 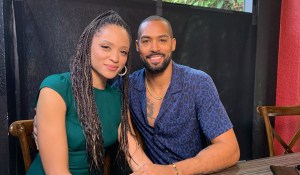 Stacy Haiduk (Kristen DiMera) immediately got the giggles when asked how she and Eric Martsolf (Brady Black) work together. They work beautifully together and showed off that easy chemistry. They have to temper it since their roles are serious and dish a little on favorite scenes. Martsolf teased a bit about the emotional stuff coming. He warned that you can’t miss a day. Lamon Archey (Eli Grant) and Sal Stowers (Lani Price) chatted about the ‘non-wedding’ for Eli and Lani and how hard it will be for Eli to get over it. There was a lot of laughter and joking around and how Lani will be in a dark place coming up. They dished on Marilyn McCoo and Abe and Lani’s close scenes. Archey admitted it was comfortable working with his costar. Matthew Ashford (Jack Deveraux) and Melissa Reeves (Jennifer Deveraux) were curious about the fan reaction to the time jump.

Mary Beth Evans (Kayla Johnson) was alone for the second year though Stephen Nichols (Steve Johnson) should be back to the event next year since he’s returning within a few weeks. Evans couldn’t wait to get her hands on the time jump scripts and asks fans to “ride the wave.” She touched base on traumatic scenes at the beginning 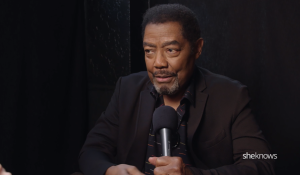 of the year and how missing Steve in her scenes was real. Wally Kurth (Justin Kiriakis) spoke out about how he was glad to return with a contract role once again and Justin’s emotional journey and how it’s been a wonderful challenge. James Reynolds (Abe Carver) dished on the fight at the ‘non-wedding’, how the show aids fans who are in need of relaxation and touched base on working with Renee Jones (Lexi Carver).

Victoria Konefal (Ciara Brady) and Robert Scott Wilson (Ben Weston) opened up about Ben’s Halloween nightmare and what a rare treat it is “to go on a different ride.” They joked that they hate working together, joking that it’s because “He’s from Boston,” and she’s from Brooklyn. Burtt and Wilson bonded over being from the same area. Konefal expressed how glad she is that Ciara is an executive at Titan and how badass it is, though they all laugh that she doesn’t know what they do there. 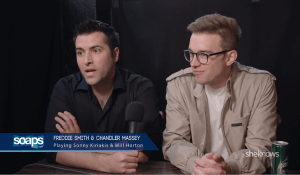 and Freddie Smith (Sonny Kiriakis) wanted to put their scripts into the garbage after they first read them because what’s coming is rough for their characters. They laughed that people in Salem should never open doors because something bad always comes when that’s done. They shared that what has happened to Will and Sonny is the worst thing that could happen to a couple. Smith teases that nothing like this has happened before. Camila Banus (Gabi Hernandez-DiMera) talked about the big debate on social media which is whether or not Gabi is a villain. Banus revealed her thoughts on that, what side she’s on and called the continuity a bit more work but a challenge. She teased that “Gabi’s in a place in her life where she’d love to be but she can’t because Stefan’s not there.” Gabi’s feelings are festering. She touches base on a fave storyline which is Gabi’s flip.

Deidre Hall (Dr. Marlena Evans) along with Drake Hogestyn (John Black) talked about how the storylines now are for next August and how confusing it is. Hogestyn agrees that fans must watch daily or they’ll miss something. He calls it bold but isn’t concerned about John and Marlena. They cracked jokes and talked about how to unwind at the end of the day. Leann Hunley (Anna DiMera) with Thaao Penghlis (Tony/Andre DiMera) teased that Tony doesn’t die this time around and that Tony and Anna are still embroiled in a love affair together. Penghlis shared that he didn’t care for a part of his storyline…

Unfortunately, since they ran out of time due to running late since the morning interviews, we didn’t get to speak with Lauren Koslow (Kate) and Billy Flynn (Chad DiMera). Watch the Day of Days promo video which showcases everything from jailbirds, Stefano’s return, Gabi’s new beau, two babies born, one character on drugs, and a few changes to the cast. 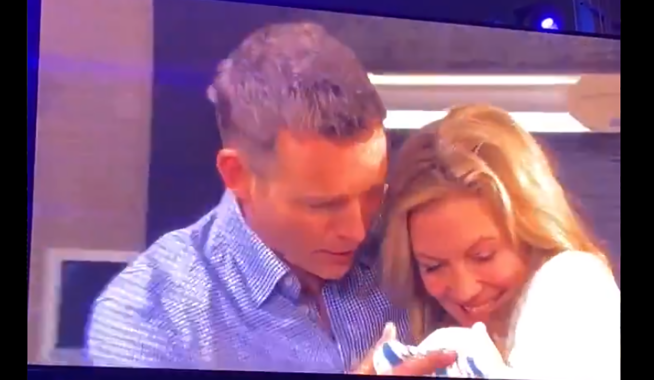