24 Things to Know About Steve Johnson Before Stephen Nichols Returns 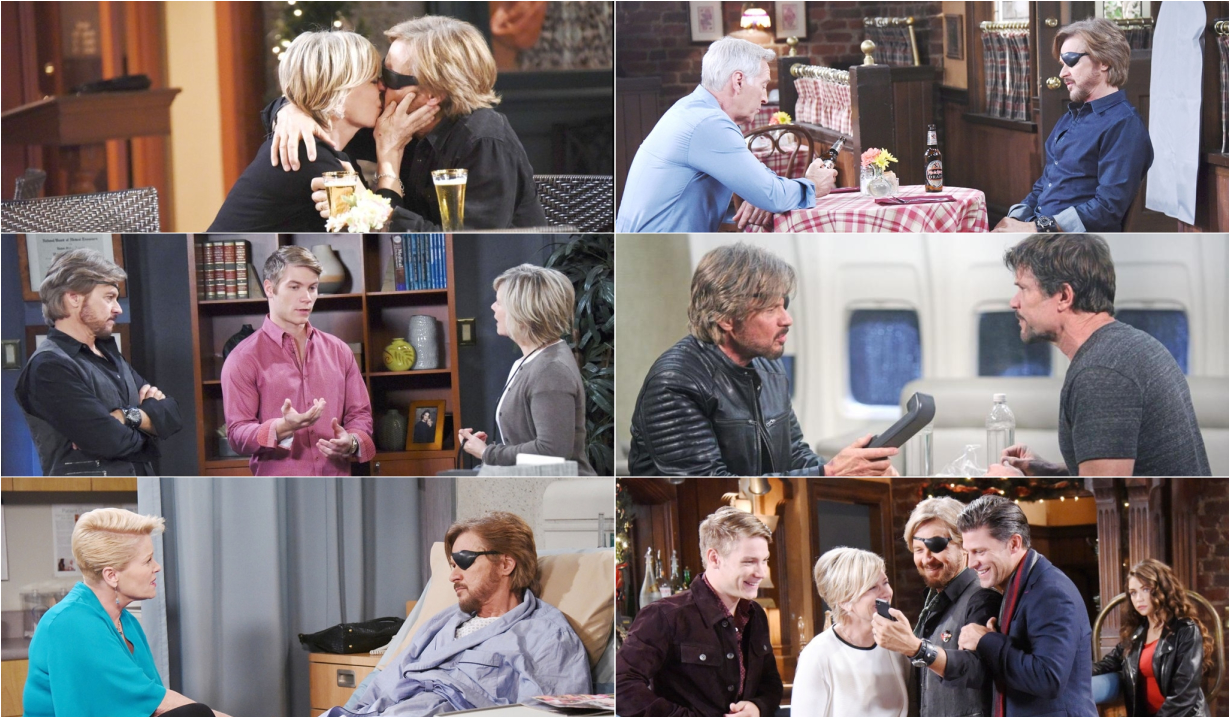 Patch makes his return to Days of our Lives this fall.

On August 31, 2018, Stephen Nichols left Day of our Lives and the role of Steven Earl “Patch” Johnson. In honor of Steve’s return to Salem in the fall, Soaps.com takes a look back at his long history of love, family, and adventure.

Steve lost his eye in a fight with Bo over a woman they were both in love with named Britta Englund. Bo took a knife to Steve’s eye resulting in him wearing his signature eye patch.

Steve Johnson fell in love with Bo’s sister Kayla Brady after he saved her from a dangerous situation.

His sister Adrienne Johnson (Judi Evans) murdered their abusive father but Steve took the blame. She blocked the incident from her mind but recalled the traumatic event while on the stand during Steve’s trial.

Steve and Adrienne learned Jack Deveraux (Matthew Ashford) was their brother, who was battling Hodgkin disease. Kayla became his nurse and eventually married her patient after Steve pushed her away upon realizing how much his dying brother loved her.

Steve and Kayla couldn’t stay away from each other and had an affair. After discovering the betrayal, a recovered Jack raped Kayla. When Steve physically confronted him, Jack fell from a rooftop. Jack needed a kidney transplant in the aftermath and Steve donated his.

On July 28, 1988, Steve married Kayla. On their honeymoon, they met an orphaned boy named Benjy Hawk (Darrell Thomas Utley) who was deaf. They brought him back to Salem. It turned out Benjy was Stefano DiMera’s (Joseph Mascolo) son, who eventually went to live with his grandfather for protection.

After joining the ISA, Patch went undercover to find an arsonist who was targeting black churches in the south. As part of his fake identity, he was given a glass eye for his reconstructed eye socket.

Steve’s thought to be dead wife Marina Toscano (Hunter Tylo) showed up looking for his help in finding a key tied to their past. Hoping Marina would give him a divorce, Steve and Kayla went to Italy with her and ran into Victor’s thugs. During an altercation with the henchmen, Steve’s glass eye and eye socket were damaged. So, it was back to the patch for him.

When Marina turned up dead, Kayla was arrested for her murder just as she and Steve were to remarry. Kayla was also pregnant at the time and gave birth to their daughter Stephanie Johnson in prison.

Steve hired a nanny who became obsessed with Stephanie and kidnapped her. When Kayla escaped from prison, she, Steve, Bo and Hope Brady (Kristian Alfonso) followed the nanny to Australia where they learned Kayla was cleared of Marina’s murder.

Upon returning to Salem with Stephanie, Steve and Kayla remarried on August 13, 1990.

Steve became a police officer and got caught in an explosion during an investigation involving Lawrence Alamain (Michael Sabatino). While in a coma, Steve was poisoned by Alamain and was presumed dead on October 23, 1990.

Jack discovered an amnesiac Steve working as a hospital orderly in 2006. Since he didn’t remember Kayla, Steve began a relationship with Billie Reed (Julie Pinson) instead.

Steve was brainwashed by E.J. DiMera (James Scott) who used him for nefarious acts such as kidnapping John Black (Drake Hogestyn). Luckily, a persistent Kayla helped him break free of E.J.’s control and he remembered their life together.

Steve and Kayla welcomed their second child Joseph “Joey” Johnson on May 16, 2008.

In 2009, the Johnson family left Salem so Kayla could run a clinic in a third world country.

Kayla returned to Salem in 2011 without Steve, who rejoined the ISA. The Johnsons filed for divorce.

In hopes of reuniting his family, Steve returned to Salem in 2015 just as his old girlfriend Ava Vitali (Tamara Braun) resurfaced to cause trouble. After Ava kidnapped Kayla, Joey killed Ava by smothering her with a pillow. Steve took the rap but he was never charged with a crime.

Steve and Kayla reunited and were married one more time on February 14, 2017.

Before she was killed, Ava told Steve she gave birth to his child but he had died. However, the boy was very much alive and living in Arizona. Steve tracked down his son Tripp Dalton (Lucas Adams) and convinced him to move to Salem.

Unbeknownst to Steve, Stefan DiMera (then played by Tyler Christopher) was instrumental in getting Steve a new bionic eye after he lost his sight in his remaining good eye when friend and P.I. business partner John poisoned him under duress. Stefan had ulterior motives though and was recording everything Steve was seeing including classified ISA documents. For this reason, Steve was arrested for espionage.

Though Steve was released from prison at the end of 2018, he decided not to return to Salem just yet.