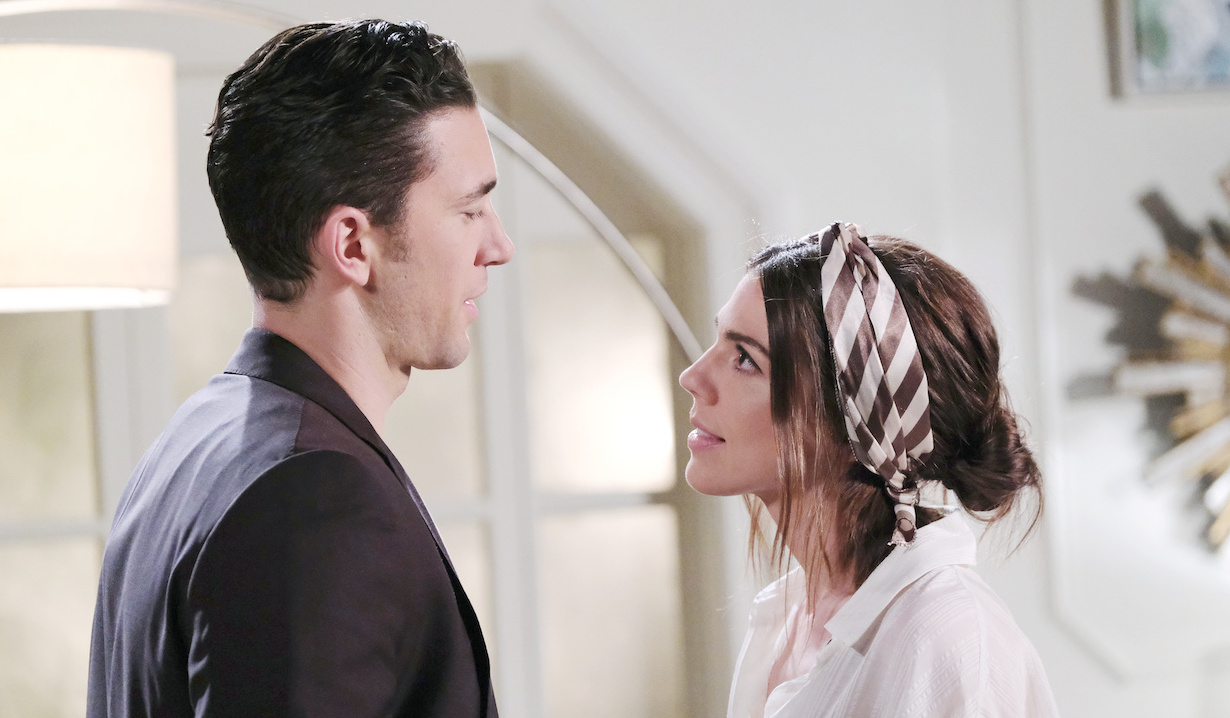 Days of our Lives has created a digital companion series on the DOOL App. Season one features Chad and Abby’s life together in Paris before Chabby returns to Salem in the fall. Soaps.com will recap all the episodes starting with the first three that were released at once. The remaining five episodes will stream weekly.

After putting the kids to bed, Chad returns to Abby who is setting up a romantic dinner in their Paris apartment. Abby was getting tired of French food, so she made chicken pot pie to remind them of home. As she lights some candles, Chad checks his phone as he teases her about actually cooking. Abby demands he give her his phone. She knows his work is important but they are important too. They need to reconnect like they said they would when they left Salem. He smiles and hands it over. Abby tells him she talked with Kayla, who updated her on JJ and Haley, and Jack resisting Dr. Rolf’s serum. Chad is optimistic that Jack will get his memories back and that he and Jennifer will find what they once had. Abby wants them to find what they had too. She reaches over the table with an open hand. He takes it and says, “How can I ever forget?” However, he has to get to the office. They argue over his work/life balance. She wants them to prioritize their marriage. His phone rings and he has to go. As he gets to the door, he stops and turns back to her. She’s right. He has to make her a priority. He lists the moments he’s fallen in love with her again since they got there. They laugh as they remember Thomas trying to touch the Mona Lisa because it reminded him of Stefano’s portrait. Abby walks over to him as they continue listing their Paris moments and they kiss. His phone goes off again and she tells him to go. He promises it’ll just be two hours. Before he leaves, she sits back at the table, sips her wine and teases she will be naked in bed waiting for him to come home. He smirks, “One hour. Tops.” Later, as Abby prepares to eat by herself, there’s a knock at the door. She opens it to Austin Reed.

Abby asks Austin what he’s doing at her door. He says work brought him to Paris and as a forensic accountant he tracked DiMera expenses to her and Chad’s apartment. She asks why he’s looking into DiMera. He chuckles saying it was a bad joke – Kate told him they were there. They catch up and he explains about Carrie cheating on him, but he doesn’t know who with. He admits he dropped the ball because he was spending all his time at work. Abby invites Austin to stay for dinner.

At the office, a French woman named Juliette (Rachele Schank) rips the phone from Chad’s hand. She ends his call with Stavros, whose money they need for financing. Chad is furious, but she thinks he needs to make Stavros think he needs them more than they need his money. As they argue, Juliet reveals that when Chad got to Paris he took the position that was rightfully hers. She’s been working on this deal for the past year. She challenges that if Stavros calls back and they close the deal, Chad must put her in charge of the new division. If Stavros doesn’t call, she’ll resign. Chad agrees but assumes Stavros is done with them. However, Stavros later calls to seal the deal. Chad asks how Juliet knew he’d call back. She responds, “All men want what they think they can’t have.” Chad again starts to leave, but she says they need to work on getting the board’s approval. They will be there all night.

Still at work, Chad tasks Juliet with pitching the board on Stavros and closing the deal herself. He’s going home to his wife and their romantic dinner. He asks if she has someone at home. She says, “I’m very happily married… to this job.” He thinks it will change when she finds the right one. Juliet watches him walk out the door and says to herself, “I’ve already found the one, but he’s already taken… for now.”

Abby and Austin open champagne as they sit for dinner at her and Chad’s place. They joke about drinking champagne with chicken pot pie. She calls it an interesting pairing. He says, “Like you and me,” as they clink glasses. He hopes that didn’t make her feel uncomfortable. He was just referring to how unexpected it was for them to be together. She recounts how she tried to break up his marriage all those years ago in hopes of ending up with him, but he brushes it off. He thought he and Carrie were forever, but now he doesn’t know what to do with the rest of his life. They toast to new beginnings as Chad comes home. He and Austin exchange tense glances.