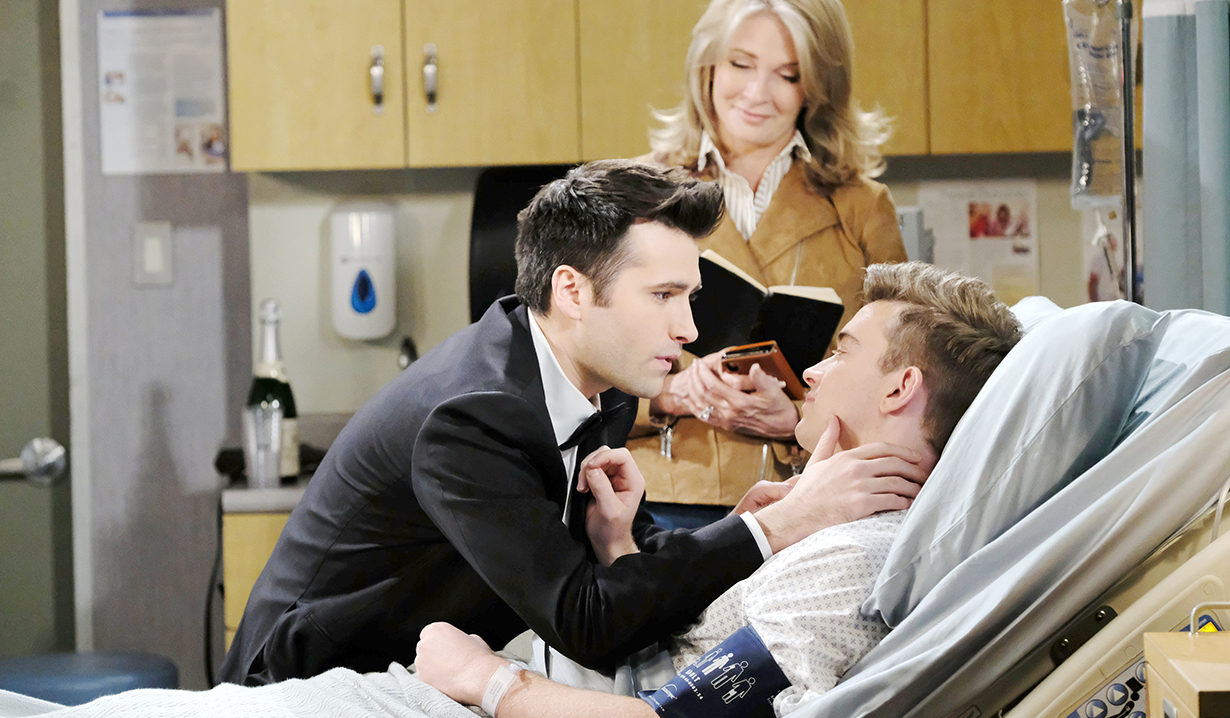 WilSon overcame other people, death, and amnesia to be together.

Will Horton (Chandler Massey) and Sonny Kiriakis (Freddie Smith) are getting married for the second time on June 17, 2019. Like any soap opera couple worth their salt, they’ve overcome a lot of angst to get to where they are, but it’s not over yet as Will still has his fatal tumor hanging over his head. Whether or not he gets a miracle cure, they deserve a little love and light. In honor of their impending nuptials, Soaps.com takes a look at the Days of our Lives couple who’ve faced numerous obstacles on their road to happiness.

Sonny and Will met for the first time in 2011 when Will saw his cousin Abigail Deveraux (Kate Mansi) welcoming Sonny home to Salem with a hug. Since her boyfriend Chad DiMera (Billy Flynn) was Will’s best friend, he worried she was cheating on him, but quickly learned Sonny was actually Jackson Kiriakis, another of Abigail’s cousins. Will became friends with Sonny and even business partners along with Chad. Though Sonny was openly gay, it took Will some time to come to terms with his own sexuality, but when he was ready, he came out to his grandmother Marlena Evans (Deidre Hall).

Even though the two had feelings for each other, like any hard-earned soap couple, Will and Sonny had to overcome miscommunication, Will sleeping with someone else – his ex-girlfriend Gabi Hernandez (Camila Banus) – and their respective friends’ and family’s input. But despite all that, and the fact that Will kept quiet about being the father of Gabi’s baby, the two became a couple and a solid co-parenting unit.

Wilson and Sonny became engaged on Valentine’s Day 2014 with their three day on-air wedding pronouncing them husbands on April 3, 2014. However, the role of Will Horton was now being played by Guy Wilson. Will’s mother Sami Brady (Alison Sweeney) walked him down the aisle and his father Lucas Roberts (Bryan Dattilo) was his best man. In addition, Gabi, Abigail, Tad Stevens (Brendan Coughlin) and JJ Deveraux (Casey Moss) stood up for the couple. Adrienne Kiriakis (Judi Evans) walked her son Sonny down the aisle and Marlena married them – “May the love you share be the bond that brings you strength and comfort and joy all the days of your lives.”

Of course, a happy couple is a boring couple on soaps, so that comfort and joy didn’t last too long. Will became a writer and after his stepfather, EJ DiMera’s (James Scott) death, moved to Los Angeles to support his mother and his siblings during their grief. He also took on screenwriting duties for a movie based on Sami’s life. Oddly though, he didn’t stay in regular contact with his husband who was back home making bad business decisions and whose ex, professional baseball player Paul Narita (Christopher Sean), came to town in November 2014. But instead of Sonny cheating on Will, it was Will, who upon getting fired from the movie and returning to Salem, was assigned a story on Paul and had an affair with the athlete in January 2015. It was also eventually revealed Will had sex with another man while in L.A., which was the last straw for Sonny, who moved to Paris.

Chandler Massey raises Will from the dead

Will tried to win his husband back, but before that could happen, Ben Weston (Robert Scott Wilson) strangled him to death on October 9, 2015. After a period of mourning, Sonny returned to Salem for good and reunited with Paul. They got engaged, but on their wedding day, October 2, 2017, Ben showed up to reveal that Will was alive (and once again being played by Chandler Massey), but he had amnesia and was living in Memphis. Paul and Sonny broke up, but Will didn’t feel a connection to Sonny, instead, he was drawn to Paul. Though heartbroken, Sonny agreed to a divorce, which was finalized on March 20, 2018. Will and Paul started dating and fell in love. Determined to get his memories back, Will injected himself with Dr. Rolf’s controversial serum, which kicked in at Marlena and John Black’s (Drake Hogestyn) August 23, 2018 wedding. Will’s memories came flooding back, including the love he felt for Sonny. He tried to stay with Paul, who was paralyzed after falling out a window trying to save Sami from getting shot by Kristen DiMera (Stacy Haiduk), but Paul eventually learned the truth and left town.

Sonny and Will were ready to be together, but they still had to deal with an opportunist named Leo Stark (Greg Rikaart), who blackmailed Sonny into marrying him. Once that issue was overcome with they were obstacle free, but soon Will learned he had a brain tumor caused by Dr. Rolf’s serum. As his conditioned worsened, Will prepared for death, but before it came to claim him, he wanted once again to be married. He proposed to Sonny from his hospital bed on June 10, 2019 – “I want everyone in the world, especially our daughter, to know the most amazing, wonderful man, wants to be my husband. I love you, Sonny. You’re the love of my life and even if that life lasts just a few more days, nothing in the world would make me happier. So, Jackson Steven Kiriakis, would you do me the honor of marrying me?”

On June 17, Will and Sonny will once again be husband and husband, but this time with the original pairing of Chandler Massey and Freddie Smith. Are you looking forward to WilSon’s second try at wedded bliss?

<p>Will and Sonny at Sonny’s old coffee shop from a few years back. The place was called Common Grounds. Chad was a co-owner.</p>

<p>This was Arianna’s birth day, literally. Gabi, with Sonny’s help, gave birth to Ari on Smith Island and it bonded the two. </p>

<p>Will and Sonny took a shower together. Things were hot and steamy. This was when Guy Wilson was in the role. </p>

<p>Will and Sonny spent some intimate time in bed. Guy Wilson played the role of Will at the time. </p>

<p>Will and Sonny were just married in this photo. The wedding officiated by Will’s grandma, Marlena Evans. </p>

<p>Will and Sonny share a tender kiss. This couple has been iconic since they were the first male gay marriage to air on soap operas. </p>

<p>Everyone in Salem thought Will was dead. Will was found in Nashville by Sonny and Paul but Will thought he was EJ DiMera.</p>

<p>Sonny sits by Will’s bedside after he’s admitted to the hospital. These two have faced a lot together, both spending time either as a patient in the hospital or there to hold the other’s hand.</p>

<p>Will and Sonny hid Leo’s body after wrongly assuming the man was dead when he accidentally fell and was knocked out at the Kiriakis mansion. They were later blackmailed for it when he returned to Salem.</p>

<p>Will and Sonny never had much on screen airtime with Arianna. This was a great moment for their little family.</p>

<p>Lucas, Sonny, Arianna and Will are painted up. Whether they’re cats or bunnies or dogs, they’re all adorable.</p>

<p>Will and Sonny broke into Diana’s room. Diana was Leo Stark’s mother and they knew she had a secret they could use against their archenemy. </p>

<p>Sonny and Will snuggle in Will’s hospital bed after Will had surgery. Things turned out well. </p>

<p>This is an older photo circa 2012 of Will and Sonny when Will first came out. Kate’s proud of her grandson and approves of the relationship. </p>

<p>Big moment for WilSon fans when Will and Sonny reunited in 2018. They’re at the park off the square.</p>

<p>Will fantasizes that Sonny visits him at his cell at Statesville and that they reunite. Will doesn’t file their divorce papers now that he knows he’s not responsible for Adrienne’s death. </p>