24 Things to Know About Nicole Walker 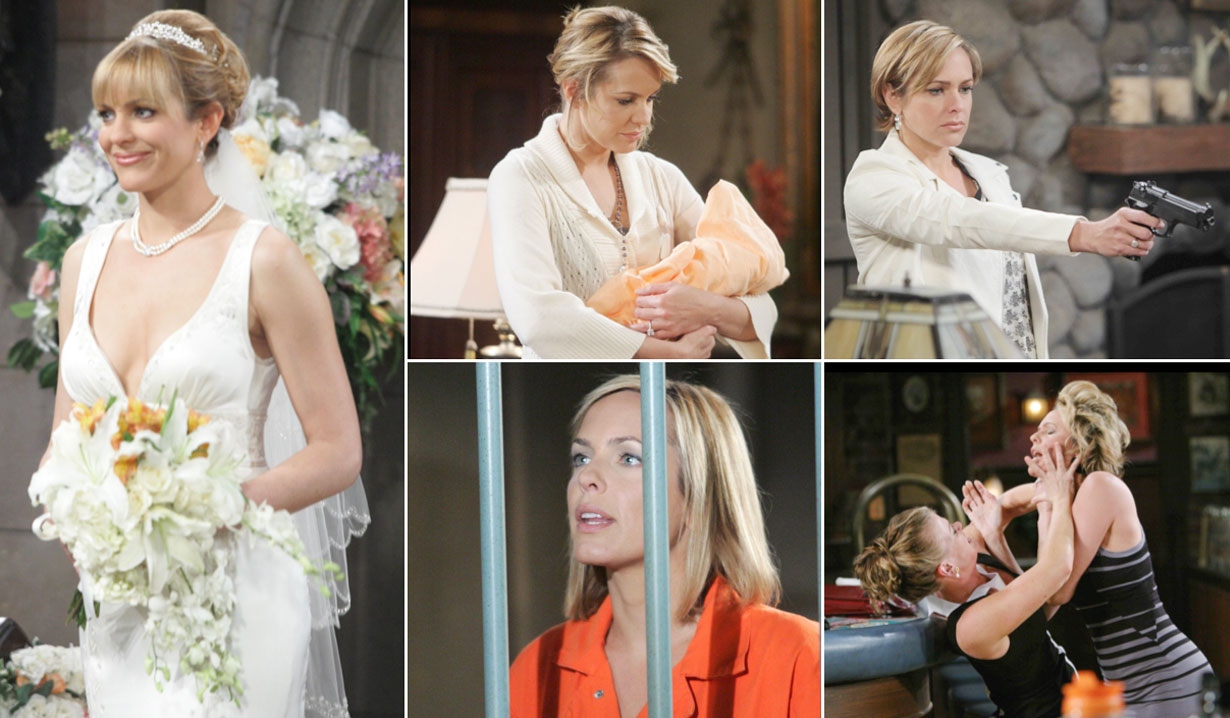 From waitress to supermodel, to mother, Days of our Lives actress has played them all.

Arianne Zucker first appeared on Days of our Lives as Nicole Walker on February 27, 1998. The character was introduced by then head writer Sally Sussman Morina. She has left the NBC soap opera several times over the years but Arianne Zucker is returning for an extended storyline arc this week. To celebrate the character’s return, Soaps.com has compiled 24 tidbits about Nicole Walker that our readers may not have known, or might have forgotten over the years.

Nicole Walker’s first scenes were as a waitress serving customers at the Java Café in Salem Place.

Nicole’s mother’s name is Fay, and she also was a waitress. Her father was Paul Mendez, and she has a sister named Taylor. Nicole’s mother Fay had an affair with Abe Carver, which produced her half-brother Brandon, a secret that came out when Brandon was an adult.

Nicole met and fell for Eric Brady when he was a photographer at Bella Magazine, where she landed a modeling contract and graced the covers of the magazine.

Sami and Nicole were originally friends before becoming mortal enemies, and over the years fought over several men, including Rafe Hernandez, EJ DiMera, Austin Reed and Lucas Horton.

Nicole married Victor Kiriakis for his money. When an attempt to hire Larry Welch, the former crooked DA of Salem, to kill Victor failed, she teamed up with Jan Spears to orchestrate Victor’s death, but the plan failed when he turned up alive.

While involved with Brady Black, Nicole learned his former love Chloe Lane had faked her death after a car accident due to being disfigured in the crash. Nicole schemed to botch Chloe’s reconstructive surgery to hold onto Brady, another one of her schemes that blew up in her face.

Nicole and Roman Brady had a one-night stand before she left town for Los Angeles in 2006 to run a division of Austin’s company, ARC (Austin Reed and Company).

While away from  Days of our Lives between 2006 and 2008, it was mentioned in passing that Nicole was getting married to a soap actor in LA, a nod to her real-life marriage to co-star Kyle Lowder (Brady Black, Rex Brady).

Nicole returned to Salem in 2008 claiming to still be married to Victor, but it turned out she had never divorced a man she married in college, Trent Robbins. This nullified her earlier marriages to Lucas and Victor.

When Nicole became involved with EJ she helped him with some of his schemes, including kidnapping Stephanie Johnson.

After miscarrying a child with EJ, Nicole adopted a baby and switched it with Sami and EJ’s child, who she tried to pass off as her own and named Sydney. Her plan was exposed by Rafe.

In one of her many reunions with Brady Black, Nicole helped Brady cover up burying Vivian Alamain alive in a sarcophagus.

Nicole once worked as an on-air reporter for Titan’s TV station, WXIR.

In another attempt to hold onto Brady, Nicole once framed Arianna Hernandez for a rash of muggings in Salem, which resulted in Arianna being sent to prison.

Nicole once served as EJ DiMera’s campaign manager in his bid for mayor of Salem, and even stole the debate questions ahead of time so he could get a leg up in the race.

When a second pregnancy with EJ resulted in a miscarriage, Nicole staged a fight with Jennifer Horton and claimed Jennifer pushed her down the stairs, resulting in the child’s death. Nicole had fallen in love with Daniel Jonas at this point and wanted to keep Jenn and Daniel apart.

Eric Brady, who returned to Salem as a priest, accused Nicole of drugging and raping him because she was still in love with him. The true culprit turned out to be Kristen DiMera, who framed Nicole.

Nicole finally was able to have her own biological child when Chloe Lane acted as a surrogate for her and Daniel Jonas, but Chloe kept the parentage of the baby Holly a secret at first because Nicole was involved with Deimos Kiriakis, who she felt was a danger to Nicole and the child.

Nicole was a dead ringer for Helena Tasso, a woman Victor and Deimos fought over in Greece years ago. Deimos went to jail for Helena’s murder but was framed by Victor.

Nicole killed Deimos, though she and everyone at a party that night was drugged to facilitate the theft of a cursed emerald necklace, and Brady discovered a taped confession of Nicole remembering killing Deimos. He used it to blackmail Nicole into leaving Salem and Eric.

Nicole is the latest member of Salem to return from the dead, having been trapped in a warehouse fire and thought to have died in October 2018.

<p>Nicole Walker and EJ DiMera shared a love affair that led to marriage in the mid-2000s. At one point, Nicole became pregnant but when she inevitably miscarried, she hid this from EJ and purchased a pregnancy pad so she could fake her pregnancy until term.</p>

<p>At the time, Nicole didn’t know that she helped deliver her own child when her BFF Chloe Lane became a surrogate mother. This was a planned surrogacy but Chloe went through with it even after Daniel had passed away and never got around to telling Nicole. </p>

<p>Xander became engaged to Nicole Walker only because he was trying to in his own way, make her love him. He was also helping her to hide a big secret. He had a recording of Nicole confessing to killing Deimos. </p>

<p>JJ Deveraux made Alice’s famous doughnuts with an extra special ingredient. Marijuana. This was unbeknownst to the Salem Book Club and Adrienne, Jennifer, Julie, Hope and Nicole ate them and got high.</p>

<p>Brady and Nicole were BFFs who at times got together for some friends with benefits action. They also fell in love, but when Nicole turned to his brother Eric, Brady blew his stack…</p>

<p>Nicole Walker and Chloe Lane have been best friends for a while, though this wasn’t how it always was. We can recall when these two were at each other’s throats and Nicole gave Chloe the flesh-eating disease, which scarred Chloe’s beautiful face. All in the name of love for a man.</p>

<p>Nicole was once engaged to Deimos Kiriakis. The engagement didn’t last and neither did Deimos. He drugged half of Salem with a hallucinogen in the punch at a party at Martin House and Nicole, high on the substance, killed him. </p>

<p>Daniel shows Nicole a little yoga. This was when they were living in his apartment on 110 Guilford Street Salem and engaged. Fun fact – this is the very same apartment Sami, Carrie and Austin lived in previously. </p>

<p>Nicole lost the love of her life when Dr. Daniel Jonas died in a car accident. She says one last goodbye here at the hospital. Incidentally, Daniel’s heart was donated to Nicole’s best friend, Brady Black.</p>

<p>Nicole and Eric found love again after falling in love in the 90s. They have settled down together, raising her daughter Holly. Holly recently called Eric, Daddy, which shocked and thrilled both parents, especially since Eric lost his child with Sarah Horton.</p>

Posted 2 mins ago
Back to Top
ad