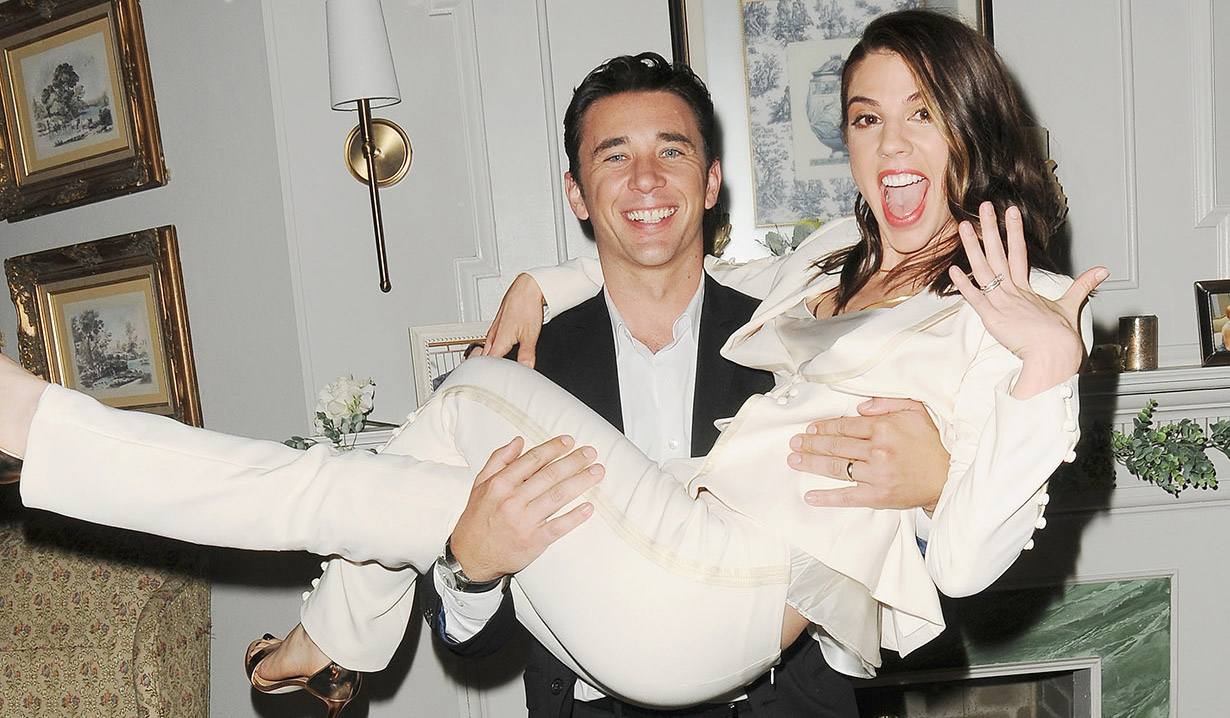 Chad DiMera and Abigail Deveraux have endured a lot of suffering, with some short-lived moments of happiness sprinkled in on Days of our Lives. As they bid Salem adieu today, fans can take solace in the fact that they’re leaving on a high note. In honor of the DiMeras departing the NBC soap, Soaps.com looks back at their long road to happiness.

Chad Woods first came to Salem in 2009 with Casey Deidrick in the role. After some time —which included finding out his baby with Mia (Taylor Danielle Spreitler) had died and briefly dating Gabi Hernandez (Camila Banus) — Chad learned Stefano DiMera (Joe Mascolo) was his biological father.

In 2011, Chad met a SORASed Abigail Deveraux (Kate Mansi) who had returned to Salem to support her mother Jennifer Horton Deveraux (Melissa Reeves) after she divorced Abby’s father Jack Deveraux (Matthew Ashford). Despite Abby’s reservations about Chad being a DiMera, they began dating.

Their initial romance didn’t last as Chad drifted from Abby to her friend Melanie Layton (Molly Burnett), while Abby became obsessed with Austin Reed (then played by Patrick Muldoon). Abigail also dated Cameron Davis (Nathan Owens) and had an affair with Chad’s brother EJ DiMera (James Scott). The latter happened only after Chad left town when it was revealed he faked his brain tumor to lure Abby away from Cameron.

When Chad returned to Salem in the form of actor Billy Flynn, he tried to repair his relationship with Abby, despite her indiscretion with his brother. However, she was dating Ben Weston (Robert Scott Weston). Their pull was too strong though and Chad and Abby found themselves in bed together. Abby remained with Ben, however, while Chad went on to briefly date Zoe Browning (Miranda Mao) and Ben’s sister Jordan Ridgeway (Chrishell Stause). 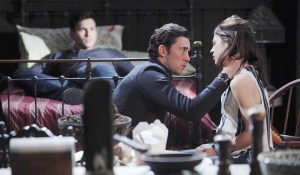 When Ben was revealed to be the Necktie Killer, he abducted a pregnant Abigail. While holding her hostage in a cabin, she went into labor. He took baby Thomas (who he thought was his, but was actually Chad’s) and left her and Chad (who of course came to her rescue) chained up after setting the cabin ablaze. Luckily, they escaped and Ben was taken into custody. Never far away, Ben returned to taunt Abigail, which led to her questioning her sanity. Suffering from PTSD, Abigail often saw Ben around town, but she wasn’t sure if he was real. Eventually, she got the upper hand on Ben and paid him back by setting him on fire. Ben survived and was taken back into custody while Abigail was committed to a mental hospital. She proceeded to fake her death so Chad could move on, which he did with Gabi… until Abby resurfaced that is, in the form of actress Marci Miller. 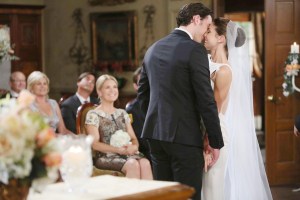 Abby and Chad’s first wedding was in 2016 at the DiMera mansion in front of their friends and family. Abby (Mansi) told the man she loved, “Chad DiMera you’re my hero, you are my soulmate, you’re my best friend, and you’re my true love.” Chad, in turn, said, “I look at you and our son, I see everything, everything I could ever want. You made me the richest man in the world because you give me love, a real family.” He finished by vowing to spend his life honoring and loving her with everything he had. 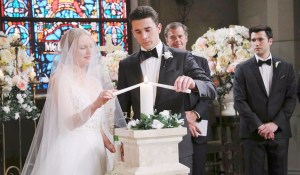 They again tied the knot in 2017, this time in a church. It was supposed to be a double wedding alongside Sonny Kiriakis (Freddie Smith) and Paul Narita (Christopher Sean), but as Abby started her vows by telling Chad how surprising life was and that no matter how much she planned, “I don’t know what’s going to happen tomorrow. I don’t know what’s going to happen in the next ten minutes, ten seconds,” Ben showed up. After briefly falling apart, Abby gathered herself, stormed over to her former tormenter and punched him in the face. However, he was not there to ruin things for Chad and Abby, but to tell Sonny that his husband Will Horton (Chandler Massey) was alive. The men didn’t marry, but Chad and Abby hung back after their guests had left, and with Thomas, Jennifer and Andre DiMera (Thaao Penghlis) by their side, Father Louis (Larry Poindexter) announced them husband and wife. 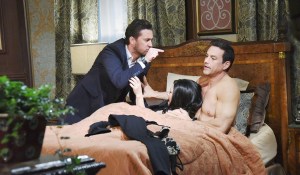 After the DiMeras’ second wedding, they were happy for a time until it was revealed that Abigail had dissociative identity disorder (D.I.D.). Abigail had sex with another of Chad’s brothers Stefan DiMera (Tyler Christopher) when her alter Gabby was in control. This, of course, tested Chad and Abby’s relationship, especially when Abigail became pregnant and didn’t know who the father was. Abigail gave birth to Charlotte and integrated her personalities, but Gabi wasn’t having it. She set out to make Abigail and the rest of Salem believe the baby was Stefan’s instead of Chad’s, and that Abby was still Gabby. Due to Gabi’s machinations, Abigail divorced Chad and married Stefan so he could counter Chad’s attempt to re-institutionalize her. Though, Abby (again played by Mansi) quickly divorced Stefan once she secured her freedom. Thankfully, Gabi’s paternity test switch came to light shortly after Charlotte’s birth. 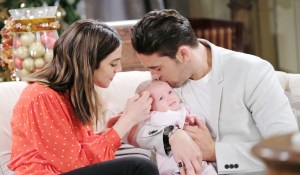 The reveals didn’t immediately bring the couple back together as Abigail couldn’t get over Chad believing Gabi’s gaslighting ways over her. However, she began to soften towards him with a little help from a meddling Julie Williams (Susan Seaforth Hayes). Abigail then leaned on Chad when Jordan kidnapped Charlotte and the duo reunited once they got their daughter back.

On February 21, 2019, Chad and Abby will have their third and (hopefully) final wedding before leaving Salem with their children Thomas and Charlotte — getting the happy ending they deserve.

Will you miss seeing Chad and Abby in Salem? What are your favorite Chabby moments? Tell us in the comments! 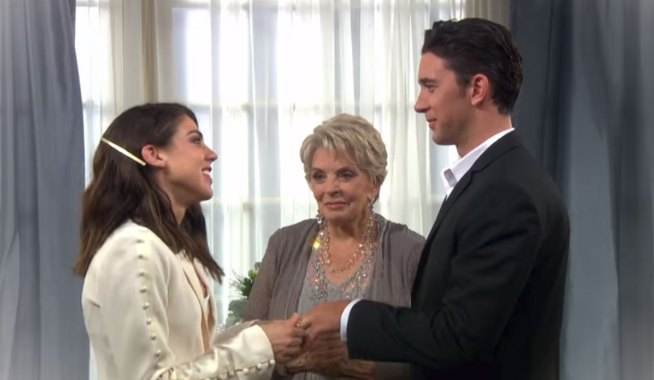 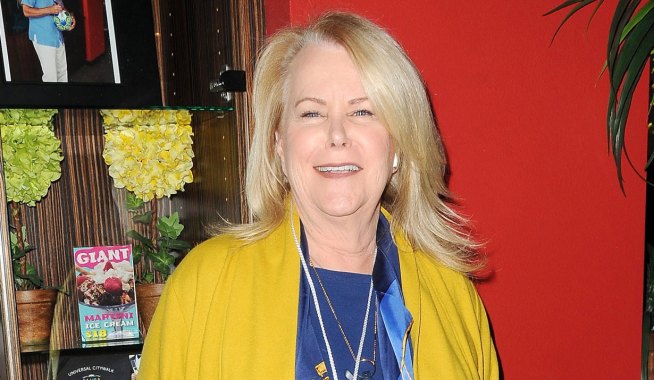