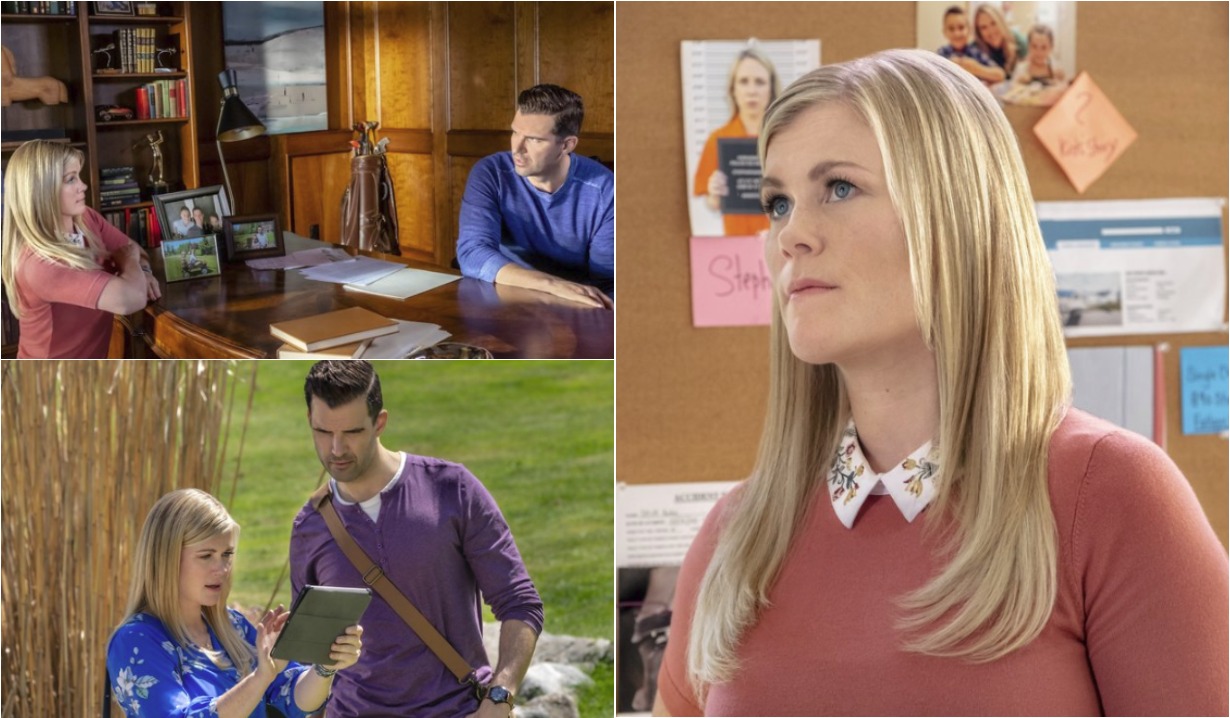 Updated July 30: Soaps.com has the premiere date for Alison Sweeney’s (Days of our Lives’ Sami Brady) latest film in the Hallmark Movies & Mysteries series Chronicle Mysteries. Fans can expect to see Sweeney back in action as Alex McPherson in Chronicle Mysteries: The Deep End on Sunday August 25 at 9:00 PM. This time, Alex’s Recovered podcast focuses on the death of a man and his wife who will likely be convicted for his murder. It’s up to Alex, and her colleague Drew Godfrey, to find the real killer before an innocent woman takes the fall.

Back on May 15 we reported Days of our Lives’ Alison Sweeney (Sami) will be bringing fans more of her Hallmark Movies & Mysteries Chronicle Mysteries movies. The actress revealed on Instagram that she is currently taping and shared, “Hey !! 👋 hard at work this #wednesday! Thinking of you all as we dig into a new @chroniclemysteries! So proud to work with this amazing cast and crew making it all happen!!!” Soaps.com will be back to report future updates. We shared news on April 11 for Alison Sweeney (Sami Brady) fans in Canada. Though the first movie in her Hallmark Movies & Mysteries series Chronicle Mysteries: Recovered premiered in Canada on Sunday April 7, fans can watch the last two movies in the series on Sunday April 14 and Sunday April 21 – both at 9:00 PM on the Bravo channel in Canada. The Days of our Lives actress is in Canada today doing press for the premieres, which began in the US on February 17, and stated, “Fun day doing press for @chroniclemysteries premiere on @verybravotv in Canada!”

On February 12, we reported, following the premiere of the first movie in Days actress Alison Sweeney’s (Sami) new Hallmark Movies & Mysteries series The Chronicle Mysteries, titled Recovered which airs Sunday February 17, Soaps.com has details for two more movie premieres… On Sunday February 24 at 9:00 PM Sweeney will be back for The Chronicle Mysteries: The Wrong Man. Sweeney’s character, podcaster Alex McPherson, goes in search of the truth surrounding the tragic death of a young lawyer, as her partner Drew (Benjamin Ayres) dives into the shady misfortunes of a shipping company.

The third installment titled The Chronicle Mysteries: Vines that Bind will premiere on Sunday March 3 at 9:00 PM in which Alex McPherson’s latest podcast leads her to a nearby town named Macklin to investigate a death ruled an accident. Alex feels as though the crime is a murder, and when another member of the victim’s family takes a bullet, she and her team gather a list of suspects with motive.

Then on January 14, Soaps.com reported the February 17 premiere of Alison Sweeney’s (Days’ Sami) new Hallmark Movies & Mysteries series The Chronicle Mysteries, as well as a sneak peek of the first movie titled Recovered through the newly released trailer below… On January 7 Soaps.com was excited to reveal the official poster for Alison Sweeney’s (Sami) Hallmark Movies & Mysteries series The Chronicle Mysteries. The actress shared it on Instagram captioned, “Yay! It’s thrilling that I finally get to share the movie poster for my new mystery series with @hallmarkmovie ! @chroniclemysteries is officially premiering Sunday, February 17th — so mark your calendar!! @benjaminayres & I are so excited for you to finally meet these great characters!” Back on December 20, 2018: Soaps.com passed along the premiere date for Days of our Lives‘ Alison Sweeney’s (Sami) new upcoming Hallmark Movies & Mysteries series The Chronicle Mysteries. The actress posted the news of its February 17, 2019 premiere date and stated, “I had so much fun today filming a preview show for my upcoming movies @chroniclemysteries for @hallmarkmovie – I found out the first episode will premiere February 17th!! Yay!! Can’t wait to hear what you all think!”

Soaps.com announced earlier in March that Alison Sweeney is returning to Days as Sami Brady, who fans are speculating could return pregnant with Rafe’s baby since last time she was in Salem, she and Rafe had comfort sex, and now Sweeney has completely different news for daytime fans. The actress, known for her Hallmark movie roles and series, will be starring in a new Hallmark Movies & Mysteries series called The Chronicle Mysteries. Sweeney will play a novelist and podcaster named Roberta ‘Robbie’ McPherson, who’s researching the cold case of Gina DeSavio. Robbie loves solving puzzles and mysteries, as well as the chase, and is particularly interested in Gina’s disappearance because they grew up together as kids in a small town. Robbie is also set to inherit her uncle Miles Lawrence’s newspaper, the Harrington Chronicle. The actress will begin principal photography in the beginning of June in Vancouver BC, Canada.

“As Hallmark Movies & Mysteries continues its meteoric growth in the cable landscape, we are excited to expand our slate of mystery movie franchises with three new additions to our already successful lineup,” said Michelle Vicary, Executive Vice President, Programming and Network Publicity, Crown Media Family Networks. “Each of our new franchises have great hooks and engaging amateur sleuths to draw in viewers who love to solve a great mystery as the story unfolds.”

Crossword Mysteries follows a brilliant crossword puzzle editor (Chabert), whose life is turned into a mess when she’s pulled into a police investigation after various clues from her recent crossword puzzles are linked to unsolved crimes. The puzzle editor and a charming but tough detective (Elliott) team up in an unlikely partnership to crack the case before the killer murders again.

Not much has been released yet for Picture Perfect, other than Alexa will play a photographer who works with a local police detective, played by her husband Carlos PenaVega.

Though Crossword Mysteries is set to premiere in June, stay tuned for release dates for the other two new mystery series.

Just some last details to get the new @chroniclemysteries ready to air! It’s so fun to get to watch the movie again!! Can’t wait to share it with you all August 25th!! 🕵🏼‍♀️🔎

Hey !! 👋 hard at work this #wednesday ! Thinking of you all as we dig into a new @chroniclemysteries ! So proud to work with this amazing cast and crew making it all happen!!!

Yay! It’s thrilling that I finally get to share the movie poster for my new mystery series with @hallmarkmovie ! @chroniclemysteries is officially premiering Sunday, February 17th — so mark your calendar!! @benjaminayres & I are so excited for you to finally meet these great characters!

I had so much fun today filming a preview show for my upcoming movies @chroniclemysteries for @hallmarkmovie – I found out the first episode will premiere February 17th!! Yay!! Can’t wait to hear what you all think! #bts #wednesday #workingmom #blessed

An #aboutlastnight #tbt – out in the snow on the streets of #nyc with my @hallmarkchannel friends! @thereallacey & @danicamckellar & I were so lucky to be treated to a fabulous New York evening. Thank you @billabbotthc @michellevicaryhc & @poperandy ! !! #nyclife #snowday #broadway