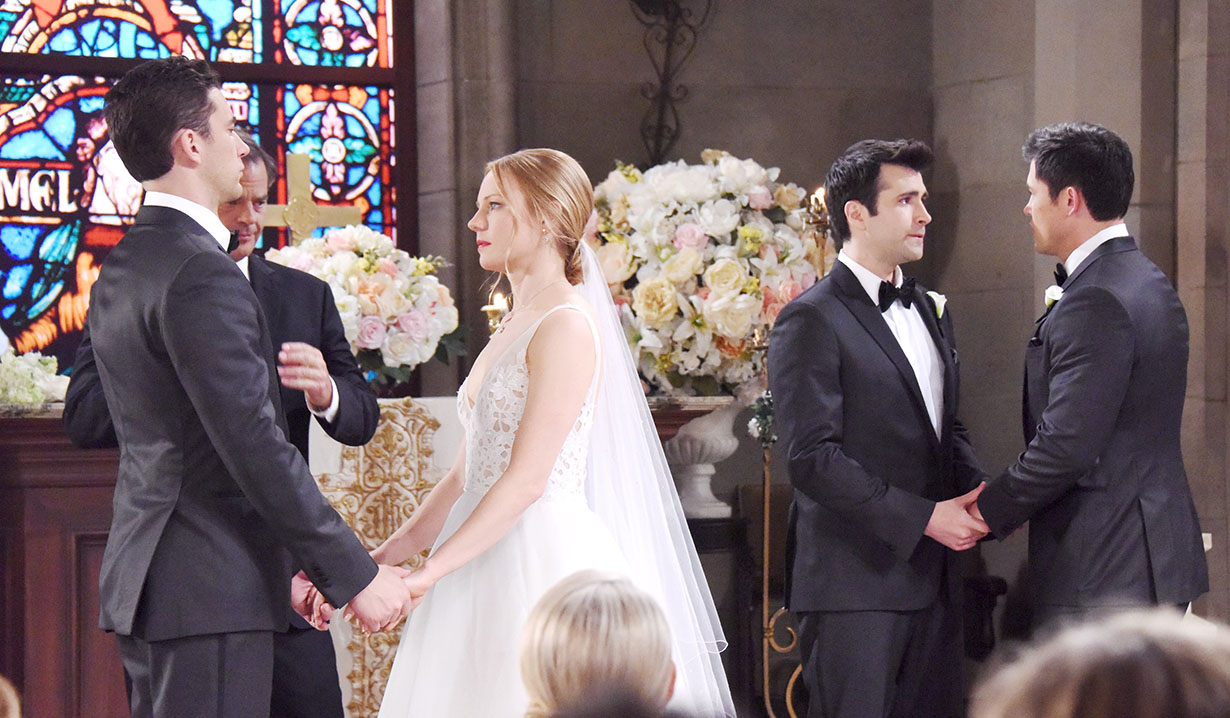 Fun and romance ahead for one of Days’ biggest couples, Chad and Abigail.

These Salemites have been married once, planned a vow renewal that went awry, got divorced, were drugged and hallucinated that they were renewing their vows, Abigail married Dario so he could get a green card, they annulled it 24 hours before their wedding date and now, finally, they’re heading to St. Luke’s to give marriage another go. Will Abigail (Marci Miller) and Chad (Billy Flynn) say “I do” during their latest walk down the aisle? Soaps.com previously talked to Freddie Smith and Christopher Sean about the double wedding, which we know has an explosive element to it, and now it’s Billy Flynn’s turn to dish on the big day.

Soaps.com: This is the third planned ceremony for Chad and Abby. What does this wedding mean to them?

Billy Flynn: I think, for them, it’s the last step in sort of correcting everything that went wrong. You know? Getting back to a fresh start.

Soaps.com: It was nice to see the triangle with Gabi [Camila Banus] not get dragged out. Was that the result of [head writer] Ron Carlivati taking over or was that already set in motion?

More: Uh oh! Clyde’s on his way back

Billy Flynn: Yeah. Ron was sort of tasked with … I mean look, I love the characters of Chad and Gabi. I think there could have been a time and place for them to have something really interesting, but I don’t think that was it. So, I think Ron was tasked with, in a lot of different ways, sort of trying to steer the ship back into the right direction.

Soaps.com: How are you feeling about the writing for Chad and Abby as a couple right now?

Billy Flynn: I think Chad and Abigail, I mean, the evolution of any love, they’re finding comfortability within each other and they’re finding new ways to love one another and trying to keep it, the excitement and things, spontaneously fun. I think that’s kind of where it’s at. I think it’s interesting. But I’m like … with my wife, I love the simplicity of our life. You know what I mean? To me it’s romantic to just lay on the couch and watch a movie. You know what I mean? Like with like her head on my chest. That’s the stuff that, if you’re telling a story, are the little nuances that mean everything.

Soaps.com: The audience likes to see those moments as well, the lighter stuff as well as the heavy drama.

Billy Flynn: You joke around, I mean that’s the thing, that’s why I love when Chad and Abby high five. It doesn’t always need to be, in soaps it can tend to be like: he slowly puts his hand on her face and dramatically says “I love you.” To me, if you’re telling a story, it’s like overdoing it. You don’t have to do that much to show you’re in love with somebody.

Soaps.com: Happiness can also be the kiss of death for soap opera couples. How would you like to see Chad and Abby written as happy yet still interesting?

Billy Flynn: It can be. I think if there’s a stagnant part, but that’s going to be the way to do it. I mean you can’t have two people, constantly … I mean we’d kill ourselves. It’s almost like a break for us as well and then other stories. I think in particular it wasn’t really like, with Ron we’re showing a lot of the happiness. I might be wrong I might not be remembering correctly, but you know, if you’re in some crazy dramatic storyline and shooting every day… [inaudible]

Soaps.com: Abby and Chad are happier than ever, right now but of course Ben [Robert Scott Wilson] is still out there. What can you tease about his return?

Billy Flynn: I can’t. I’m not allowed to say anything.

Soaps.com: What was it like filming the double wedding with so much of the cast there and so many storylines going on?

Billy Flynn: It was fun. Part of me wanted them to have their own moment, that romantic part of me, but it was a lot of fun. Chad’s relationship with Sonny I think is awesome. So I think for him to have the two closest people to him standing up there. It was fun.

Soaps.com: You mentioned your wife and since the bachelor parties aired yesterday, with Chad’s being a bust, what was your bachelor party like?

Billy Flynn: I went to Nashville with eight guys and it was different. [laughter] It was fun though. My best man planned it. It was fun. We went golfing.

Soaps.com: So no family histories were pulled out or ascots handed out?

Billy Flynn: Nope. None of that.

Soaps.com: What else should fans expect from the double wedding?

Billy Flynn: I think they can expect what they [always expect] any time Chad and Abby get involved you know? They love each other to death. You’re going to get some “awwws” and that kind of stuff and there’ll be some laughs because Chad, is a goofball … It’s for everybody no matter who you support.