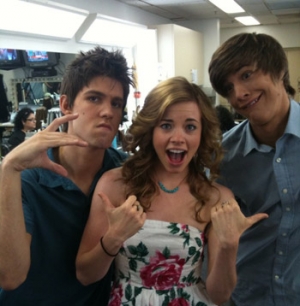 Soaps.com Exclusive! Days of our Lives Molly Burnett and Casey Deidrick are dating!

Soaps.com recently had an opportunity to chat with Molly Burnett (Melanie Layton) and Casey Deidrick (Chad Peterson), about what it’s like dating while working on Days of Our Lives. This adorable couple dish on “Harry Potter,” who keeps the messiest dressing room to what it’s like working on set as a couple!

Soaps.com: What’s on the agenda for both of you today?

Molly Burnett: Oh… I’m thinkin’ about learning some lines for tomorrow.
Casey Deidrick: Definitely tackling Molly a few times, run lines with each other for this upcoming week, and spending time with my new Shiba Inu, Ace. (Which he assures me are the coolest dogs ever!)

Soaps.com: How did you meet and what were your reactions to each other?

Casey Deidrick: We were introduced by Marnie, our amazing casting director and from there, she had my attention. Then Molly, Mark (Hapka, Nathan Horton), and I went out dancing one night and my skills on the dance floor really impressed her…
Molly Burnett: Oh is that so? Actually we really hung out at the Dodgers game first that Eric (Martsolf, Brady Black) and Nadia (Bjorlin, Chloe Lane Black Horton) sang [at the Dodgers Stadium] and found out that when we were growing up we lived like 15 minutes away from each other in Littleton Colorado! But yeah, Casey’s got mad dancin’ skills.

Soaps.com:You’re not yet working together, (yet?) are you hoping that you’ll have some lines together at some point or do you prefer playing opposite others, instead?

Molly Burnett: Haven’t you heard? Melanie and Chad are the next huge super couple! [Jokes] I think our characters run in different circles for the time being but Casey’s incredibly talented and I would love to work with him and have Melanie give poor Chad a run for his trouble making money!
Casey Deidrick: Oh yeah? Well, if that’s the case…Bring it! [laughs] Molly continuously blows my mind with the amount of talent she has, she’s brilliant and I would love to work with her. I think those two characters would make for a very interesting scene and eventually a great “super couple.”

Soaps.com: Are you still on set on the same days from time to time? And when you are, do you hang out in each other's dressing rooms?

Molly Burnett: It’s chaos downstairs on the days where all of us are on set. Casey, Mark, Taylor, (Sprietler, Mia McKormick), Dylan (Patton, Will Horton) - we're all running around yelling and playing video games and "hallway bowling." It's pretty epic!
Casey Deidrick: Usually within the first 10 minutes of getting on set, the hallways turn into a mosh pit. I don't like to step out much, until I’m about to tape because it’s my room of Zen, but occasionally I’ll sneak a few kisses! We'll run lines in each others rooms too.

Soaps.com: So whose is the messiest? And do you know who your dressing room belonged to before you took it over?

Casey Deidrick: I was given Rachel Melvin's room. As for who's messiest...we're both pretty neat individuals. I'm really "OCD" about keeping things organized.
Molly Burnett: I was in Jay Kenneth Johnson's first room but just moved down the hall into the room next to Eric Martsolf! There’s usually a lot of singing going on that side of the hall! And I’m pretty messy. Casey just doesn't know it yet!

Soaps.com: What's in your dressing rooms?

Casey Deidrick: I took the liberty of painting my room midnight blue, it's appealing to me. I have a Heath Ledger (as the Joker) shrine on my wall... it's inspiring to look at every time I'm on set, keeps me focused.
Molly Burnett: I have a big painting hangin’ up behind my couch and a big white fuzzy rug and tons of glow in the dark stars all over the ceiling of my room. Not to mention scripts sprawled everywhere, and in my DVD player right now? "Hook."

Soaps.com: You both obviously have great taste, being that you're "Harry Potter" fans, [grin] but what else do you have in common, what do you get up to when you're off set?

Casey Deidrick: Okay, I'm more of a "Lord of the Rings" fan, but "Harry Potter" is just as epic. Molly and I actually have a lot in common. We both despise tomatoes, and she constantly threatens to slip them in my food. We're both Taurus's. We're from the same state and actually lived minutes away from each other and never even met until I got on the show.
Molly Burnett: You keep talkin’ about "Lord of the Rings" and you're gonna find a basket of tomatoes in your room on Monday! He's right we have a bunch in common, love dancing, movie watching, but I also get to experience new things with him that I’d never do on my own, and we trade off. For instance, he took me to a heavy metal concert, and I’m taking him to a jazz concert!

Soaps.com: What has been a great date night for each of you?

Molly Burnett: I’m super easy going. How can you not be when you're in such great company? Recently we joined Nadia Bjorlin and Brandon Beemer (ex-Shawn Brady, Owen Knight, Bold and the Beautiful) for a dinner party which was an absolute blast. Almost as epic as the "Harry Potter and the Half Blood Prince" movie premiere!
Casey Deidrick: You spittin' game Molly? (laughs) We've had multiple dance nights, those are always a blast! There was one night we walked down Ventura BLVD. to get frozen yogurt, we talked about all kinds of silly topics and shared stories, I enjoyed every second of it. How can you not fall for that smile?

Soaps.com: I know Molly has auditioned for other parts and has taken a part in <a href="http://www.soaps.com/daysofourlives/news/3885/Molly_Burnett_in_True_Blood/"True Blood,but do you also have outs in your contract, Casey? Have you been taking advantage?

Casey Deidrick: Yes, if it doesn't interfere with my shooting schedule, I’m allowed 3 guest star roles a year. I have been auditioning during hiatus.

Soaps.com: Wrapping things up a bit, I figured the fans would blast me if I didn’t ask this! Any teasers you'd like to share from upcoming scenes?

Casey Deidrick: Chad is staying in Salem! You'll just have to wait and see for the rest!
Molly Burnett: Poor Melanie is going to get her heart strings pulled in a few directions, and in a little bit, Melanie and Brady are back at it trying to save the day!