Retro: Sami blackmailed Lexi to get Austin away from Carrie 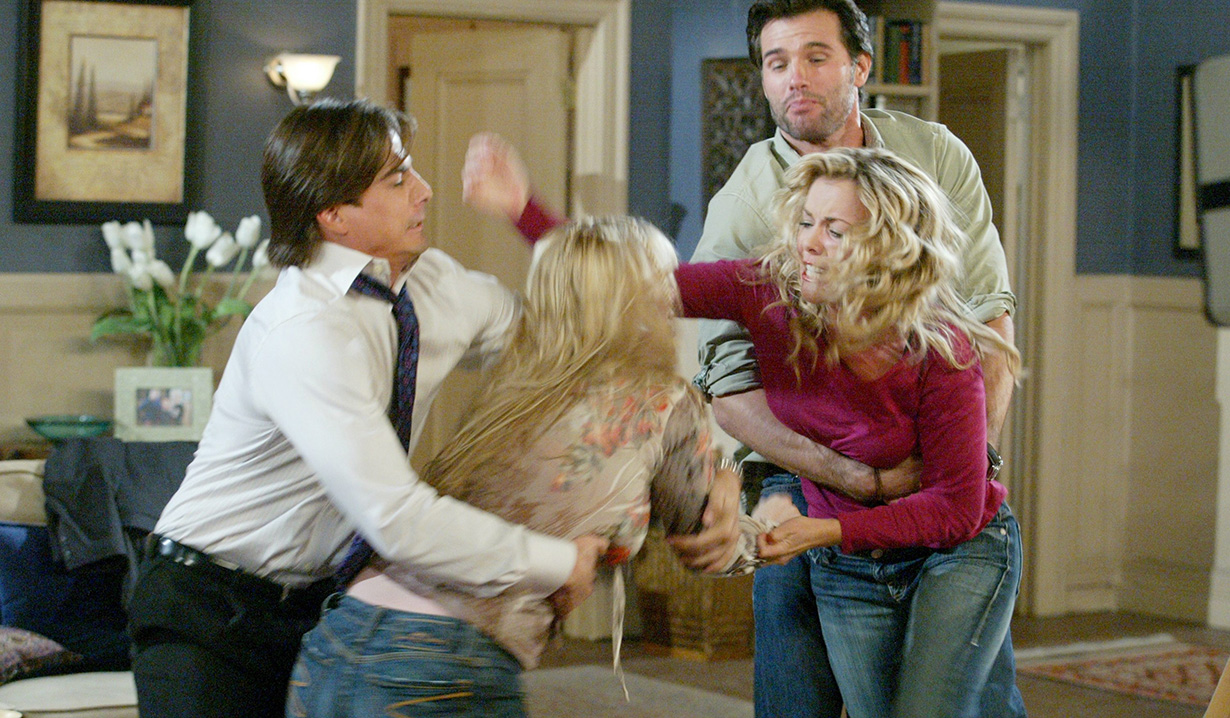 Days of our Lives’ Sami’s blackmail scheme against Lexi backfired in a big way.

In 2006, Carrie returned to Salem CEO of High Style, a company that Lucas was interested in taking over. When he learned of Carrie’s ties to the company, he stopped proceedings and wanted to date her. Though Carrie had feelings for Lucas, her heart belonged with Austin, and the two got together, much to Sami’s chagrin. Sami didn’t like the way things were going and schemed to break the two up. She encouraged Austin to buy out Carrie’s company, which he did, without knowledge that Carrie was CEO. When the news came to Carrie, she felt betrayed by Austin and turned to Lucas for comfort. That wasn’t enough for Sami, who wanted to make sure her sister and the man she wanted didn’t reunite – ever, even when Austin asked Sami to marry him.

More: A decade worth of soap opera feuds that both amused and made us cringe

Sami caught Dr. Lexi Carver having an affair with hottie detective Tek Kramer, behind “honest” Abe’s back. Sami being Sami, used the knowledge to further her own agenda, and blackmailed Lexi into helping her keep Carrie away from Austin. Lexi didn’t want Abe to find out about her dalliance so she agreed to lie to Carrie and tell her that she and Austin both carried rare genetic markers which would create birth defects and possibly worse if they ever had kids together. Crushed, Carrie tried to move on and accepted a marriage proposal from Lucas. Soon, she had symptoms of pregnancy. She made a commitment to ignore her feelings for Austin, but when she learned she wasn’t pregnant, those feelings flowed back. When Carrie and Austin were locked on the roof of their apartment building, they both gave into their feelings and made love. Lucas, along with Sami’s new British neighbor, EJ, caught them in the act and Lucas gave Carrie the boot. Once annulment papers were signed, a black gloved hand slid a note under Sami’s door which the foursome read and discovered Sami had been blackmailing Lexi to keep Carrie and Austin apart. Sami admitted it was true and Carrie came at her, yelling, “I’m going to kill you!” There just so happened to be a cake nearby, made to celebrate Will’s birthday, and a cat fight turned into the best cake fight ever, one that wouldn’t be repeated, since Sami realized Austin just wasn’t into her and she moved on to eventually marry EJ DiMera – a man who loved her despite or because of her schemes!

<p>In 2006, Carrie had feelings for Lucas and they were a couple but Carrie was in love with Austin. When Carrie and Austin were locked on the roof of the apartment complex, they gave in to their feelings and Lucas caught Carrie cheating on him.  </p>

<p>Sami knew Carrie and Austin carried a torch for each other but schemed to keep them apart by using Lexi Carver’s affair with Tek Kramer behind Abe’s back to keep Austin away from her sister. Sami forced Lexi to lie that Carrie and Austin both carried rare genetic markers which would mean birth defects for any kids they had together. Carrie did move on with Lucas but when she learned the truth about the lie, she attacked Sami, yelling, <a href="https://soaps.sheknows.com/days-of-our-lives/news/48279/retro-sami-blackmailed-lexi-to-get-austin-away-from-carrie/" target="_blank">“I’m going to kill you!”</a></p>

<p>The two sisters fought and took the cake that was baked to celebrate Will’s birthday and threw it at each other. It took Lucas and Austin to pry the two apart and there was cake everywhere.</p>

<p>The cake fight scene was a lot of fun for the viewers and possibly evern more fun by the looks of the actors!</p>

Who is Dr. Richard ‘Dick’ Baker?