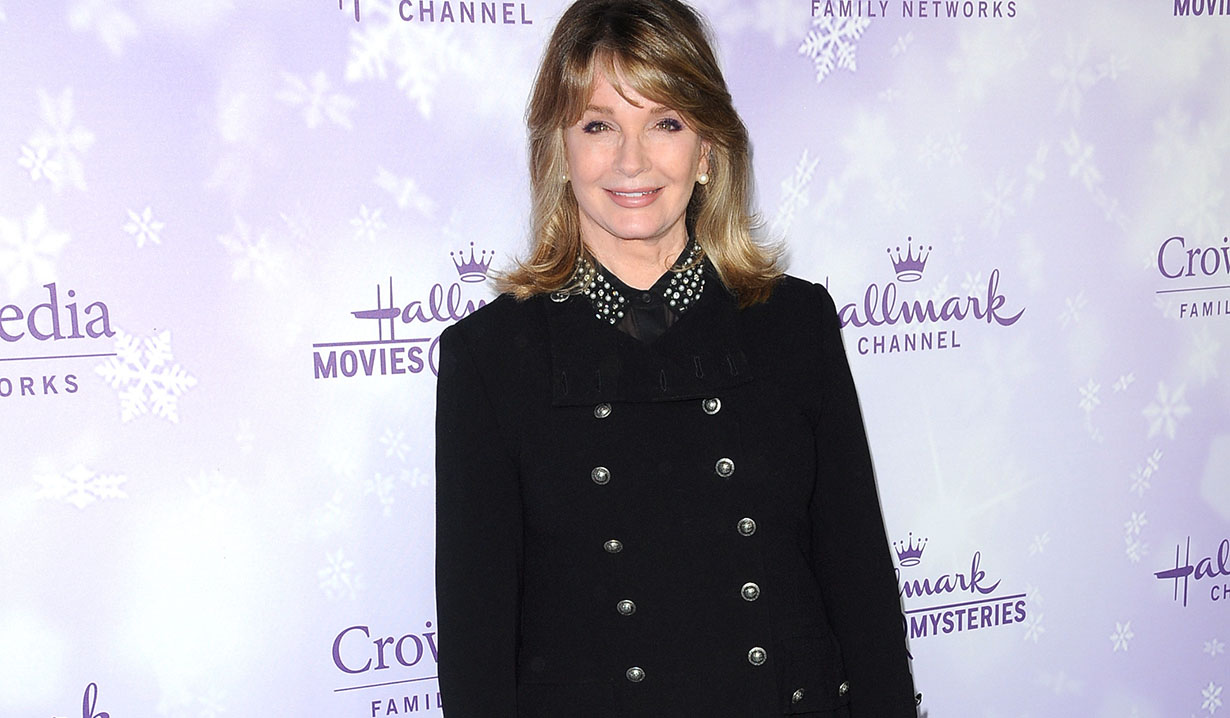 Deidre Hall stopped by “Hollywood Today” to be interviewed by host and past castmate, Ross Matthews (Chris), about the upcoming unveiling of her star.  She gets pretty giddy when Matthews shows her exactly where the star is!

As Soaps.com reported back in June of 2013, Deidre Hall was excited to announce she’d be receiving her own star on the Walk of Fame. The time has finally come and the iconic actress who plays Dr. Marlena Evans Black on “Days of our Lives” will attend the dedication ceremony at 6201 Hollywood Boulevard Thursday May 19 at 11:30 AM – 12:15 PM. Hollywood Chamber of Commerce, President/CEO Leron Gubler will emcee the event with a special guest speaker, soap legend Susan Seaforth Hayes (Julie Williams, “Days of our Lives”). The event will be live-streamed exclusively as they dedicate the 2, 581 star in the category of television.

President/CEO of the Hollywood Chamber Leron Gubler said of the event, “Soap opera fans are going to be thrilled that their favorite star will be honored on the
Walk of Fame. Deidre’s long career on television is proof she is a huge fan favorite and we welcome her to Hollywood Boulevard.”

As the release announces, “Hall has been adored by fans worldwide for generations. As one of the most recognized and filmed faces throughout her career, Hall holds the distinction of appearing on screen more than any performer in television history. Cherished by millions worldwide as the beautiful Dr. Marlena Evans, Hall has been a driving force in the success of NBC’s longest running scripted daytime drama, ‘Days
of Our Lives’. Born in Milwaukee as an identical twin, Hall’s family moved to Lake Worth, Florida, when she was six. Being crowned Junior Orange Bowl Queen at thirteen marked her first formal appearance in front of a large audience. While still in her teens, Hall’s gift for the ad lib garnered her a broadcasting spot on WLIZ-Radio where she hosted her own show interviewing local talent, reporting current events, announcing hurricane reports, and managing daily sign-on and sign-off. In her late teens, while spending a summer with friends in California, Hall supported herself by modeling and getting bit parts in commercials and television. Her easy ability to connect with others increased her TV work and, in 1976, she got the call that changed her life. NBC’s ‘Days of Our Lives’ producers had been searching for someone to fill the role of a beautiful, strong-minded, passionate character who fit the empowering social movement of the day, and Hall walked in. With acting classes under her belt, preparation met opportunity and, in typical silver-lining Hollywood fashion the red carpet rolled out to meet her, and Hall was brought on as Dr. Marlena Evans.

Hall’s talent extends into other creative areas as well, such as Little Big Bear, the children’s book she wrote for a richly illustrated educational series by Write Brain. As an advocate of healthy living and positive attitude, she co-wrote the informative, humorous cookbook, Deidre Hall’s Kitchen Close-Up, comprising nutrition tips for those suffering with heart disease, diabetes and obesity. In her latest book, How Does She Do It? A Beauty Book, Hall’s engaging wink-and-a-smile approach pokes fun at her career of being made up, dressed up and photographed from every angle. Her desire to help others gave Hall the opportunity to be in the driver’s seat on television projects to promote awareness of special-needs children and women’s issues. For example, she holds the distinction of being the first actress to speak out about her fertility struggles and surrogate parenting, depicted in ‘Never Say Never, The Deidre Hall Story’, the movie she co-wrote and executive produced about this struggle. Hall’s straight-forward telling of her story helped open doors for women everywhere and initiated a national conversation about fertility.

Hall also made television history when her identical twin stepped away from her own Special-Education duties to portray Marlena’s evil twin, Samantha and, several years later in a devious plot twist, the snaggle-toothed, curmudgeonly waitress tries to transform herself into a Marlena look-alike. Among Hall’s more esoteric screen credits is a live performance with a five-ton pachyderm on television’s ‘Circus of the Stars’, which obliged Hall to practice with Elephant Joe, a key member of a traveling circus; as well as the role as a widowed mother of three, starring opposite Wilford Brimley in Lorimar’s ‘Our House’, a production frequently honored for its deep family values. Hall has always believed in making time for community service. She donates all proceeds from her ‘Days of Our Lives’ calendars and cookbooks to St. Jude Children’s Research Hospital, and all proceeds from her watercolor greeting cards to Wounded Warriors. When her children entered school, Hall joined the school board to improve school lunches, and appealed to members of Congress to renew the Child Nutrition Act, which included her hosting a press conference at the White House. In 2009, Hall traveled with son David to Brazil as an ambassador for Operation Smile.”

Irina Shayk Flashes A Huge Smile While Out With Daughter, 4, After Kanye West Getaway