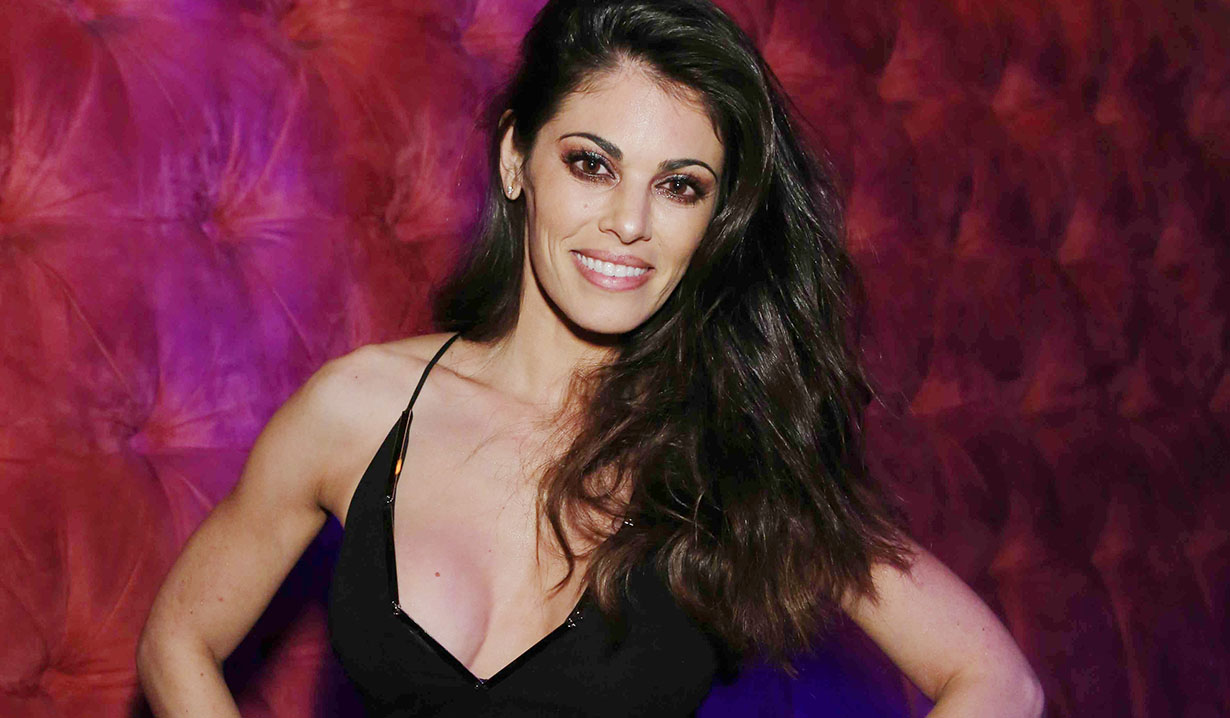 I can never forget that part of my life.

It’s hard not to have a soft spot for soap opera alum Lindsay Hartley (Dr. Cara Castillo, “All My Children,” Arianna Hernandez, “Days of our Lives,” Theresa Lopez-Fitzgerald, “Passions”) after watching her grow up on daytime, hanging tough through show cancellations and character kill-offs. This Saturday, April 16, fans will have a chance to see her star in the premiere of the new Lifetime thriller Dying to be Loved at 8:00 PM EST along with Paloma Kwiatkowski (“Bates Motel”), Dan Payne (“The Cabin in the Woods”) and Jedidiah Goodacre (“Tomorrowland”).

Hartley took time to chat with Soaps.com about what she brings to her new role, how special her memories are from her soap opera past, and which role she wishes she was still able to play today.

Soaps.com: Why don’t you tell me a little bit about your character Jill?

Hartley: She’s a lawyer and she had her daughter at a really young age, like 20-ish. Then the dad is not around or her partner, and so she pretty much raised her on her own. Her daughter is clinically depressed and that sets the overly-concerned type of parent that Jill is. Her daughter had almost died once when she stopped medication, so she is seriously clinically depressed, and very withdrawn from people. That’s who Jill’s child is, so she’s very involved, overly protective. Then her daughter meets this boy and everything happens from there. That’s when the excitement begins. She’s a really good actress (Kwiatkowski), and we had a blast. It’s nice to be playing a character that is a little bit closer to my age. Sometimes I play characters that are a little younger than me, so I act a little younger.

Soaps.com: You’re probably able to pull emotion from being a mom yourself.

Hartley: It was definitely easier. My daughter is going to be 12 on July 3 so she’s like a young girl herself. This girl is even older, and you have to give that child a lot of space, which is what we as mothers do anyway as kids get older. Jill has to give her space but be completely on her at the same time. It’s that weird push and pull, trying to do the right thing but let her be independent. But she can’t be independent because we have to make sure she’s okay. It’s like being that stressful mother playing this character.

Soaps.com: Lifetime Movies have a fan base of their own, and you’ve done a few now, including last month’s “Nightmare Nurse.” What is it about these movies you enjoy being a part of?

Hartley: I like them because they’re just fun. They do remind me of being on a soap opera but with a short, real quick story of a soap opera. You could really extend these characters and these stories, which is really cool. The way that Lifetime sets it up, they have the disaster, and then they have the resolution scene. But you feel like you could keep on going. Why not turn it into a soap opera? I’m obviously a huge fan of soap operas. I love that genre, and am a huge fan.

Soaps.com: Do you have any more Lifetime Movies in the works or any other projects coming up?

This one has many of the iconic actors in the horror films from the 80s, like the guy that played Jason, the guy that played Leatherface, the guy from “Hellraiser.” They all are in this movie and it’s based on the nine levels of hell. It’s in a prison where all the bad guys go to get brainwashed that they’re no longer evil and they’re not good. They just have a neutral position. My character is one of the five evils of hell. I am the most evil that you can get, and I’ve never been a real evil person before, just supernatural powers and stuff. I’m really excited about that. They’re already filming in Philadelphia, and then they’re coming to Los Angeles as well at a studio here. Which is great for me, because I don’t have to leave my kid.

Soaps.com: Do you see characteristics of yourself in your daughter now that she’s getting to be pre-teen?

Hartley: For sure. She’s awesome. We didn’t have school yesterday for teacher in-service day so we went to Disneyland because she just got accepted at this performing arts school. So we went on Splash Mountain, her first time ever. I was so proud of her because she’s kind of a scaredy-cat. She’s getting more brave now. We were on the ride and I was like, “Oh my God, I feel like a bad parent. I hope she doesn’t freak out when we go down that big drop.” She was great. She didn’t love it, but she made it through. But you know how they have a picture at the end? Her face looks so scared and focused, like super-focused. That’s how I look so much of the time, when I’m really focusing on something. And she had that exact picture. She goes, “I look like you.” I’m like, “You do.”

Soaps.com: She’s going to a performing arts school – is she interested in acting too?

Hartley: She is. She’s more into singing and dancing. I don’t know. We’re going to wait and see how she feels about acting. We certainly, her dad [Justin Hartley, Adam Newman on “The Young and the Restless”] and I, don’t push her into the acting world. We know when it’s amazing, it’s amazing. When it’s not, it’s really challenging. We’re going to let her make her way through, but she takes dance twice a week. She’s been taking singing lessons. Those are the things that she wants to do that she just loves. We’ll just keep an open mind about the acting, see where it goes.

Soaps.com: We are such huge fans of yours on every daytime show that you’ve been on. What do you remember about your first day on the set of “Passions?”

Hartley: I do actually remember. We shot for two weeks on a pier about 45 minutes from Los Angeles, and it was so fun. I don’t know if you remember it, but we did the whole carnival thing where Theresa spills the paint on Ethan (Travis Schuldt). We shot the inner portion on the stages back at CBS Radford, but that was after we did all the exterior work outside on the pier. We all got to stay to a hotel together and bond and hangout. Obviously, I really connected quickly with Brook (Kerr) who played Whitney. We were on that carnival thing for, I think, 6 to 8 weeks. Do you remember how long those days lasted? Sometimes we didn’t change for two months. We wore the same outfit and always had to make sure they had doubles and triples of the clothing.

It was special. It was very bonding, and then we came to the stages and they were so beautiful. You just walk outside your dressing room and you were in the outdoors.

Soaps.com: You were on that show for almost a decade. How did that experience shape you as an actress?

Hartley: There’s so many things. I had to learn lines quickly. One of the biggest things was how to get super-emotional, super-fast, and then just walk out the door and be done with it. I think that was something I had to learn, crying hard, because things move so quickly and my character was always devastated. There was always something that happened to her that was horrendous, big, bigger than life. She was very dramatic, and so I had to learn how to find that quickly, get it out there, and then just move on to the next page. Like rip it off and throw it away and move on to find the next moment. That was great. You definitely build a family when you’re with people for nine years. I just felt really blessed, and I still feel blessed, and that’s going to always be something that I remember. I can never forget that part of my life. That was such a highlight.

Soaps.com: What was it like to say goodbye to that role? Were you ready to move on?

Hartley: Oh no, I was not ready to move on. I actually would love to still be playing her and making her even more crazier and more fun, because now that I’m older I can make her even more fun to watch I feel. I learned how to play her, and we created her. Now I’ve got more life experience that I could apply to make her more interesting. I definitely was not near done. I still wish it was on the air.

Soaps.com: National Siblings Day was this week, and your fans were posting pictures of you and Galen Gering (Rafe Hernandez, “Days”/Luis Lopez-Fitzgerald, “Passions”) together. Does that make you feel moved that they still love you guys together?

Hartley: Oh yes, absolutely. They still tweet me daily about “Passions,” and they always say they’re watching this season or that on YouTube. It means a lot to me, because it’s been quite a few years. You never know if it would’ve just aired a few years later in life, if it would’ve still been on the air. With the supernatural stuff, right now everything is supernatural.

Soaps.com: Your family from “Days” has a lot of stuff going on and you have been talked about and missed. Do you ever watch “Days,” and does it interest you that you’re still a presence even though you’re not there?

Hartley: I get that information too. Let me tell you, I constantly get the “Days” update. “Why aren’t you there? I miss Lindsay Hartley. Bring her back.” It was definitely not my decision. I’m super supportive of the genre. I love it, and I don’t know what to say except thank you and I wish I was there.

Soaps.com: You rode the “AMC” roller coaster, from the show’s cancellation, the online reboot, then that cancellation. After all that would you consider returning to daytime?

Hartley: Absolutely. I love it. It’s like my home. I get it. I think it’s great. I know the people who watch, you want to do it for them too. It’s like, “Yeah, okay, I’m going to be a cheerleader for this for you and with you. I’d like to give you more, so I appreciate it.”

Soaps.com: Is there a kind of role that you would love to have this time around if you were to come back to daytime?

Hartley: I never really thought about that, but I guess something closer to the age that I am. That’s my favorite thing about this movie. Anything for a type of woman in her mid- to late-30s, where that mind frame is. And I don’t mind ever causing harm to another character on the show or having harm done to me. I’m easy breezy with story. I’m like, “Let’s play.” The more crazy the storylines, the more fun it is.

Find out what has changed in the actress’ life since Soaps.com’s 2008 Passions exit interview with Lindsay Hartley.