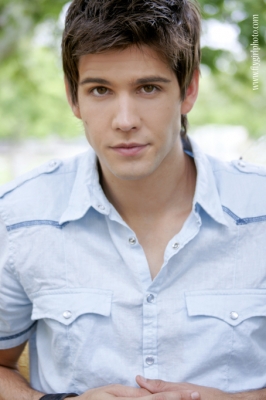 Today, Days of Our Lives fans will hear gossipy Kinsey (Shelby Young) mention the name “Chad” to Mia, (Taylor Spreitler) causing her to drop a mug. Those of you who have been following the story, will assume that Chad must be her ex-boyfriend and the one who fathered baby Grace. You’ll have assumed correctly, but the twist is, the one person who probably should know about the pregnancy and about Grace – Chad – doesn’t. Yet.

Casey Deidrick joined the cast of Days of Our Lives recently to provide more of a look into Mia’s past. It’s the start of summer, and summers in Salem are often dedicated to the youthful storylines involving teenagers. This is how fans got to know and love Belle and Shawn. Soaps.com is looking forward to a summer with the younger crowd in Salem and has been chatting up the actors in order to get fans prepared for what’s to come! We got to know Casey a little this week and Chad and hope fans will enjoy what he has to say about his new part on the show.

Soaps.com: How did you find out about the audition? There were a few roles up at the time that you auditioned. Did you originally audition for Chad?

Casey Deidrick: I originally auditioned for the role of Tad, about a month and a half prior to hearing about my test audition for Chad Peterson. I went to producers for the role of Tad, it was one of my best callback auditions I’ve ever done, but I obviously wasn’t right for the role. The casting director (Marnie), was amazing to work with, she definitely challenged me more than any casting director I’ve ever auditioned for. I guess I made a good impression on her because it wasn’t long until I found out I was going straight to test for the role of Chad Peterson. I worked really hard on this character, and I dove into it many different ways and some things worked and some didn’t, but there were certain characteristics of the character that stuck with me all the way up to the test. I signed a [really long] contract and found out almost 2 weeks later that I got the job.

Soaps.com: What can you tell us about your character?

CD: Chad Peterson has trouble written all over him, yet I believe he means well. There’s a part of him that you hate, and love at the same time. He’s a very confident, edgy, mysterious person. He’s the type of person that can persuade you by his words. It’s tough to break him, it seems like he’s seen and been through a lot in the past…maybe a rough history with his parents, or abandonment issues. He will definitely bring out a side of Mia (Taylor Spreitler) that no one has ever seen before. The love triangle between Will/Mia/Chad is getting intense.

Soaps.com: You’ve been put into a group of great young actors/characters such as the ones you’ve mentioned (Mark Hapka (Nathan Horton), Molly Burnett (Melanie Layton), and Taylor Spreitler (Mia)). Did you know any of them before you started this role? Since you’ve met, have you hung out with any?

CD: I have the pleasure of working with Mark Hapka, Molly Burnett, Taylor Spreitler, and Dylan Patton. We all get along so well on set, it’s chaos when we all get together, [laughs] yet we are all very focused individuals. I wouldn’t want to spend my days on set with anyone else, we encourage each other and all get along so well. I actually knew Taylor Spreitler before my audition for Chad, she is actually a very good friend of mine, which is why I’m sure the chemistry came across on camera the way that it did. She is such an amazing actress and person. I feel so blessed to be able to work with her on a daily basis.

Soaps.com: You’re in a metal band and have been for over 3 years. What can you tell fans about your band, such as what type of music you play, who is your inspiration, how did you get started, where do you jam and which venues do you play?

CD: I’ve been in metal bands all throughout high school back home in Colorado, and just recently I got into a new band called, A Dreadful Fall. I’ve been in this band for almost 7 months now. We just finished recording a 4 song e.p. The band is so stoked on the new music, and we’re in the middle of writing more songs. Fans of Chad might see a similarity between my music and Chad. When preparing for the role, I sort of looked at Chad as a rock star because they have a different way of looking at things, different from anyone else. Which I think viewers will see in Chad as the story progresses. Anyways, back to the band, [laughs] we are a metalcore/hardcore band. We get a lot of our inspiration from bands we listen to, (August Burns Red-being my favorite band, All Shall Perish, Parkway Drive, Bring Me the Horizon) basically anything heavy with epic break downs; I’m all about the breakdowns. My life inspires the lyrics I write for the songs, things that have happened to me in the past, my childhood, past relationships, new relationships I’ve encountered living out here in Los Angeles, and basically writing about things that all kids my age are growing through right now. It’s my attempt to reach out and help kids who are going through the same situations I’ve been through. We play all over the Los Angeles area, fans can reach us on MySpace.

Friday June 19 is Casey’s debut in Salem. Congratulations goes out to Casey for snagging this role.

Wimbledon Pre-empts Days of our...