As Soaps.com previously reported, various Days of our Lives characters will be exiting the show with the new writing regime on the way. While we're not certain which characters will fall at the hands of this new serial killer, we can easily speculate who is leaving in a final way. 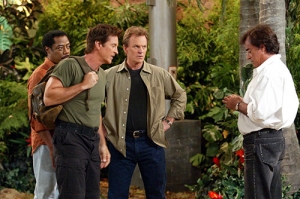 The latest front burner storyline on the way will feature a shocking end to some characters.

Salemites are no strangers to serial killers on the loose. In the 80’s, the Salem Strangler, Jake Kositchek, was dumped at the altar by a prostitute with multiple personalities. After Jessica Blake/Angel left him, he went on a rampage, killing women he viewed as immoral. The Salem Slasher murders shocked everyone when Stefano DiMera and Andre DiMera plotted to frame Roman Brady as homicidal. Andre, disguised as Roman, butchered several Salemites. Shortly thereafter the Dragon, AKA The Duke of Earl, went nuts, attacking and killing those who were in line to inherit the throne. His main target – Lady Joanna. Things didn’t end well for the Dragon, and that wasn’t the end of the serial killers in Salem. We saw the Riverfront Slasher in Harper Deveraux, who was of the same mind as the Salem Strangler, who also murdered women he believed to be of immoral character. Most recently, in 2003, the biggest serial killer wreaked havoc on Salem as he subliminally forced Marlena to think that she was offing half of Salem, yet all of the Salem Stalker’s (Andre DiMera) victims turned up in Melaswen, no worse for wear.

It’s been a few years since “Days” characters have had their worlds turned upside down and disaster’s about to strike again with a new killer story on the way. According to EW, the week of November 8, which is the official date of the 50th anniversary, “the murder mystery plot will culminate in a ‘huge reveal’.” 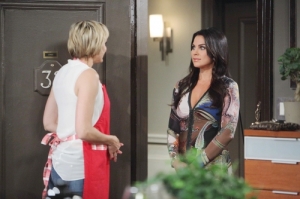 Days of our Lives' Kate Mansi in Muse