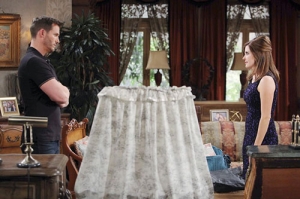 There’s been a whole lot of nothing going on in Salem these days. This week was no different.

The truth really shall set you free!
In last week’s Deconstructing DOOL I mentioned finding it too difficult to root for Nicole these days. I wanted to see her do the right thing, even if it cost her. This week she came clean about almost getting it on with Eric in the crawl space. Millions of fans fell out of their La-Z-Boys. Her honesty was a shock and the whole scene was powerful and realistic. It made many of us root for them like we haven’t in ages. Kudos for Shawn Christian for giving Daniel some tears to show his pain.

Gracious Maggie.
It was very magnanimous of Maggie to accept Nicole as her daughter-in-law-to-be and touching that she offered to throw an engagement party, considering she looked like she lost her best dog when Daniel told her the news. I bet she threw up when she got to her car.

It’s always the good ones to go.
Poor Bev. She turned her parents down to go to Europe so she could play second fiddle to boring old Paigey-girl with JJ. I admire her strength in telling JJ she’s through with him and her wishing him the best. There are stirrings that Bev may not be seen after this week. I like the actress and enjoyed Bev, though we see so little of her. Did anyone else think Eve was about to ask skeevy Kyle for his phone number so she could call him after his date with her daughter?

Repetitive scenes.
For the past few weeks JJ and Jennifer have had the exact same conversation with Jenn worrying and wringing her hands over her son going undercover with the DEA. It’s happened so often it’s ruining what could be an interesting storyline.

Will’s so transparent.
Lucas overheard him skulking around the park trying to...I don't know. Set up Derrick? Set up Paul with Derrick? Set up Sonny? His response: “I think you should put more effort into being with Sonny than these schemes. You’re worse than your mother.” It went in one ear and out the other. Will kept on scheming to get Paul interested in Derrick and it worked though in a sense it felt as though it backfired when Sonny showed discomfort with his ex-beau getting close to Derrick. It made me feel bad for Sonny. I noticed Will didn't seem to mind. That's love. Yep.

It was nice to see Abby and Will friends again even though she’s not sure she can trust him completely yet. Letting him in on her secret is a perfect way to bond, and in a surprising twist – he hasn’t gossiped about it for Sonix! It’s good to see more balance of his character. He even stood up for his husband with those homophobes.

Popping the question?
Obviously Clyde engineered it so his son would ask Abigail to marry him when they're not even close to being ready. I doubt it was even Ben's mother's birthday. That was one of the worst proposals in the history of soaps! And Abigail's response was just as bad: "What? Where? Did you buy that?" Oh the romance. It was what the romance novels must call a 'bodice-ripper'. It wasn't lost on me that he reminded her they promised not to keep anything from each other. She's hiding cheating and paternity questions and he's monitoring her movements with a spy-app and hiding it. Good luck.

Mary Poppins.
I’m not really sure why Brady’s so resolute about Theresa working outside the home and them hiring a nanny to bring their kid up. They were so adamant to get their child back from Kristen and moments after he’s safe and sound at home they pawn him off on some stranger. It’s not as though Theresa’s got a career she cares about so why not stay home and bring up her baby? Daddy Warbucks wouldn’t miss the paltry money from her living expenses and Tate can bond with mommy instead of too-perfect Emma. At least Megan "I took two buses to get here" Crabtree was entertaining!

That's this week, wrapped up. What are your thoughts?

“When did we get to be so old and boring?” Will asks Sonny.

Lucas to Will: "You're worse than your mother."
Megan to Theresa: "You are never gonna convince Daddy Warbucks in there to hire me over Julie freaking Andrews."

Rafe: "Alright, congratulations you just won the award for the most ignorant thing I have heard in my club all month. And the bar is pretty high. Let's go see what your prize is outside."