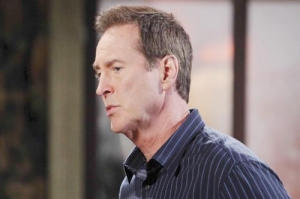 I’m not letting you do this by yourself.

In this week’s Throwback Thursday poll, Soaps.com goes back to 2002 when “Days of our Lives'” John Black helped Marlena Evans Black regain her lost memories…

Currently in Salem, Aiden Jennings is digging into the past of Clyde and Ben Weston. Back then, John was also asking questions as he wanted to help Marlena find out what had happened to her while she was held on the DiMera’s island and the connection to Tony DiMera. Previously, John had saved Marlena from Stella Lombard, and was determined to help her this time as well. Marlena was reluctant to delve into her mysterious past at first, but ultimately decided it was important to have the information for the safety of her family. As they conducted an investigation on the computer to try and locate the island, some pictures they had gave Marlena a strange feeling. John felt the drawings might trigger her lost memories. He talked about going to the area where the island was thought to be and Marlena was determined not to let him go alone.

During their conversation, John also told Marlena they needed to acknowledge some things they’d been tiptoeing around because it scared the hell out of them – Tony’s fugue states where he whispered her name, her visceral reaction when she first held a certain key, and something else. Do you remember what it was?

Last week's answer to the Throwback Thursday Days poll: Jack proposed to Jennifer on a rooftop.

Find out when Thaao Penghlis returns to Days as Tony.