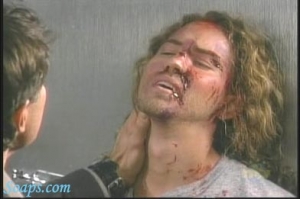 Great chemistry between these two! (Soaps.com)

I’m only commenting on what stood out for me this week. The week started out with a bang and ended with a bang. That’s uncommon and works for me! A little sex this week was good to see, though it always makes me smirk when I see lit candles in a sex scene. In reality, it’s a rarity that we stop to light a candle. Ripping clothes off seems somehow more appropriate. My word of the week is “annoying”…While I liked the show, some of the characters annoyed me.

Chloe’s a trusting soul: Kate’s psychotic:
I still wonder if she’s on some drug that’s making her psychotic. Kate really has gone off the deep end. Her motivation is unwavering. Momma bear out to fight for her baby cub, Lucas. I recall only too well that Daniel and Chloe saved her life and Daniel also saved Philip’s life. She, on the other hand, is alive because of them and seems to forget. So far, Chloe cheated on Daniel but she has not hurt Lucas, technically, (yet!) because he doesn’t know or remember. I understand being angry with Chloe, but she’s not a tramp and Kate’s no saint. Her behaviour is over the top and it’s about to get worse.

Daniel a Womanizer?
This week Daniel fantasized a lot about Chloe as he did last week. I may be the minority but last week when he had that wet dream of sorts, I thought it was hot. Yep. A half naked guy in bed, dreaming about sex? Healthy and hot. I digress. Daniel had a vivid fantasy involving Chloe, in the hospital shower. (The boy needs to release that pent up tension!) What struck me about this was that when fantasy Chloe told him she loved him, he didn’t say it back. One could argue that he’s simply hot for her bod, or that when a guy fantasizes, he fantasizes about sex, rather than love, as many women would. (There are exceptions!) Because these scenes got me thinking about how I felt about Daniel and because so many were discussing him in the boards, here’s a poll to find out if Daniel indeed is a womanizer! I won’t vote, but I think he’s just a dude getting laid like anybody else in this world who is single and dating!

Philly saves Steph:
It’s been plaguing me since we first saw Gordon Thomson playing the character of Walter… I’m not sure why the show chose to hire a big name such as Thomson, for such a meaningless role. I’m befuddled. Is he gone? The kidnapping storyline has ended, but has the feud really ended? It doesn’t appear as though Stefano’s finished with this yet, which I think makes sense. Just ending the story and ending the feud would have been unrealistic and would have left us all wondering what it was all for. The scenes of Philip saving Stephanie were exciting, yet too long for my taste. Think Rafe the FBI agent and Marino’s no-name killer for two days. I had to laugh during Philip’s escape from the body drawer. He sat right up and turned completely around in the body drawer and kicked his way out. I thought the drawers were so small that they could barely move. Philly’s quick thinking of telling Owen Stephanie is preggers was smart, but Steph didn’t get it. It was a distraction, dear. I’ll excuse her this time because she was just freed from a horrible ordeal. Peculiar. That part seemed “off” to me.

Roman turned up at the mansion to pack Stephanie up and take her home, but she refused. Missy thinks her kidnapping "random or bad luck." Delusional? I was surprised to hear from Roman that Steve and Kayla moved out of town. Did I hear him right? I was glad they addressed their lack of appearance considering what happened, but didn’t you miss them this week? Steve would have kicked arse in those scenes and Kayla could have wrapped her daughter into her arms and protected her, afterward.

Tales from the Crypt:
Some were wondering why there would be fresh flowers at a crypt nobody has visited in eons. Fresh flowers in a crypt are put there by the funeral staff. Family orders this and periodically, the attendants will place them in the crypt for the family. Kind of a waste, considering flowers are much more enjoyable when one is alive. Anyway, McGuyver/Brady asking Melanie to take off her bra so he could use the wire in his cell phone was interesting and made all sorts of fans start pining for a Brady-Melanie partnering! Ipolled you all about that here. So far, the majority asked me to take another poll when Nathan arrives in Salem. Most others want her paired with Brady!

Cheerios:
I like Cheerios. They’re delish in milk or as a snack. The Bope Cheerios ad was unnatural and hysterical. Hey, at least they showed my Bope, right? Well… not really. We’re seeing them as recurring vets right now and I’m anxious to see them in a storyline of their own, so if they need to do these hysterical commercials in order to pay them, I say go to it.

Not in the majority:
Another week in counting and I still find Sami and Rafe a dreadful bore. It’s obvious that Sami and Luis (Rafe) care deeply for each other, but I can’t seem to get attached. Galen Gering Tweeted that since he can’t learn his lines very well, they were hidden in Grace’s adoption papers. I hope he finds a way to learn them. I feel it’s important to the fans that all actors on any show learn their lines properly so that reading them doesn’t interfere with the acting. Especially on this show, considering we have it on good word that they don’t get to do a few takes! Rafe's got something interesting that he and Arianna have been alluding to this week. More of that will come up as the weeks progress.

I am impressed with Sami’s mothering skills this time around. Shame that her daughter… oh sorry, Mia’s daughter is ill, but glad that Dr. Dan is on the case, though the prognosis is not looking good. Sami, Nicole and Mia are rocking their scenes and made me cry during Friday’s show. (Wait until you see Monday...) I polled our readers, asking who their fave couples were right now. My vote would go for Bope and then Mill – Wia? Safe won out and EJami came in second place! See results here or vote if you haven’t yet.

The Ejami fans must love the scenes with EJ consoling Sami. I thought he was very kind and sweet with her, but had to roll my eyes when he told her that Grace would be fine and that she was lucky to have Sami as a mother. Reminded me of those old scenes where all they did was discuss the freaking kids. Bah!

Annoying:
Sami wondered to Rafe that by lying to Lucas earlier in the year about losing her child somehow had something to do with Grace’s health issue. Because you know, "God" rolls like that. *insert eye roll here* If you believe, believe. So annoying to me.

Nic:
Early in the week, Nicole deliberately told EJ that Rafe was adopting Grace, knowing he would be upset about it, but then when EJ wanted to confront Sami about it, Nicole turned the tables on him and accused him of being jealous. Oh brother! Instead of telling Nicole, "No, I’m not and stop accusing me of that," he retorted, "You’re the one who is jealous." No growth whatsoever from these two, though EJ did a 180 and decided not to confront Sami about it.
Monday, Nicole gets her deceiving butt to the chapel and starts praying. Girl, that’s not going to work. She should come clean now, but won’t. Stefano prefers she keep quiet and is using his knowledge of her baby switch to keep her quiet. Why? Because no doubt that she’ll soon be feeling the guilt so badly that she’ll want to spill. She might not do so, knowing, as Stefano pointed out, that EJ couldn’t get custody of Sydney if he was still with the woman who stole her. Meaning, EJ will dump her. Well, wouldn’t he anyway?! I didn’t say anything about Stefano, because I figured he has known for a long time.

Annoying:
Nicole, who either calls Mia or runs into her someplace in Salem, only to beg her to stay away from her and Sydney. Note to Nicole: Lose Mia’s number.

Pot meet Kettle:
Lucas found out Mia’s doing a 12 step program and forbade Will to see her. He’s a father, trying to protect his kid, but oh my, how horribly hypocritical of him! Maybe he forgot some of those 12 steps, such as the one where you’re supposed to help others that suffer from the same addiction? Lucas doesn’t even know what step Mia is at, so how can he judge her for hanging around with Will, without that knowledge? Chloe? Dump him. Go for Daniel. Just get this storyline over with.

Let's get this week over with! I'm not looking forward to next week, knowing things are not going to look good for Grace.

Thank-you for reading my thoughts on this past week. It'll be another fab weekend in Toronto and I plan on taking full advantage. Cheers to you all if you made it this far, I am bowing to you.