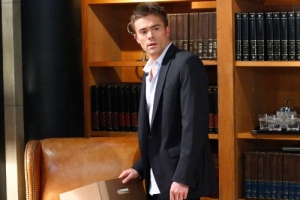 Philip Kiriakis is returning to Salem with a new face. Soap opera vet John-Paul Lavoisier (ex-Rex, “One Life to Live”) has been cast as Victor’s (John Aniston) son with Kate (Lauren Koslow).

The character has not been seen on “Days of our Lives” since 2011. He was previously played by Jay Kenneth Johnson and Kyle Brandt. A one-time war hero, Philip has had close romantic connections to many characters in town, including Belle (Martha Madison), Chloe (Nadia Bjorlin), and Melanie (Molly Burnett) among others. He was also involved in the demise of Tony DiMera (Thaao Penghlis). He’ll return Thursday December 10 to take over for Brady at Titan.

Learn about another past character coming back by reading Tamara Braun returns to Days.

Deconstructing DOOL: A slow week and...