Deconstructing DOOL: They’re making a mountain out of a mole hill 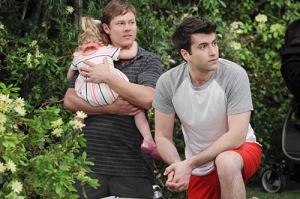 The highlight of our week in Salem has got to be those old dogs Victor and Stefano working together to take down Clyde. What a treat to see these icons get more airtime and with each other. Even though we can agree two of the most powerful villains in soaps could squash a hick like Weston in five seconds flat, it should be fun to see them working together. And though Clyde’s a rube, we can’t underestimate his criminal prowess. Maybe now that Stefano knows Clyde instigated Sonny’s attack, he’ll figure out that the man was also responsible for EJ’s death. Look out Clyde!

Is Eve bold as freak or just dumb as a stump?
Eve reading Laura Horton’s file out in public at the Brady pub made me gasp aloud. She couldn’t have at least put it in a plain manila folder?

Go find your bliss, Paige.
I wanted Paige to have an edge but now she has gone overboard. Turning the tables on Eve was fun, shocking and left me feeling a bit empty. Why she’s still in Salem is anyone’s guess when she could be at Stanford living her dream. Isn’t the best revenge a happy life? She has fallen out of character too drastically, stalking her mum and then yelling at her to stay out of her life. Um she was, until you hunted her down! Haha!

What the heck?
I can’t believe Daniel pounded on Xander at work. With his surgeon hands. And all that happened to the untouchable perpetually tanned doctor was that the security guards pulled him off Xander. No suspension, and Xander didn’t even press charges. I guess he’s suddenly not vengeful anymore? Or maybe he is only when a woman plays him.

WilSon…
Last week in Deconstructing DOOL I had indigestion writing about Will. This week I’ve indigestion watching him. Dude needs Shock Therapy. I almost placed bets that he’d seduce Derrick but no. It was almost worse. He used his kid and Paul’s friendship with the bellhop to make his husband think Paul was unavailable. So infantile. That’s not love. It was nice to see some eye candy at the beach but a crying shame we didn’t see Tad. I’d rather have quirky and fun Tad over whiney Will and his insecurity fueled buffoonery. Did anyone else want to kick him when he told his kid, “Now Sonny can finally see Paul’s moving on?” Despicable.

Will that old rumour about Sonny being killed off be actualized?
Clyde made it sound as though Sonny’s days are numbered. At least that’s the general feeling I took away from the warning he made under his breath after his homophobic babble at TBD. He also thinks it’s time to get rid of Chad permanently but Chad’s not the one leaving the show. What are your thoughts? Vote. What’ll happen to Sonny?

Sometimes a kiss is just a kiss.
All the flashbacks and hullaballoo over what Nicole and Eric did while they thought they were dying is excessive. One moment in a crawl space does not a relationship make. Eric doesn’t know what he wants. Five minutes ago he was in love with Serena.

Paranoia is strong with this one.
None of us start reading page one of a story and then skip to the middle so why are the "Days" writers writing this story as if it begun weeks or months ago? Nobody really knows what's going on and we can't believe that Theresa's paranoid that Brady will find the nanny attractive and fall for her without showing us that there's even an attraction. Is she okay in the head? At this point I can't wait until September, even not knowing what to expect. This is stupid.

Odd flashbacks.
How weird was it that Benny-boy revealed a rather vivid imagination and flashed back to his girlfriend doing DiMera when he wasn’t even there! Maybe next week he'll flashback to Abigail realizing she's pregnant. It's a gift.

That’s it folks. What are your thoughts on this week’s episodes?

Rafe to Ciara: "You figure out which team's going to pay you the most and then you throw the game!"

Victor to Stefano when asked what’s going on between him and Clyde: "Well, Maggie and I go square dancing with him and Kate every Thursday night. The man is Baryshnikov with a two step."

Justin to Kate: "Stay away from my desk. Don't touch my crayons, either!"

Anne, “Is she positively perfect in every way? You could take Miss Mary Poppins' flying umbrella and shove it where the sun don't shine!”