Deconstructing DOOL: None of this will matter come September 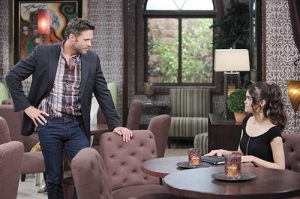 Several flashbacks reigned over the week while a few loose ends were tied up for many players, maybe in preparation for September’s changes. Let’s get to it.

Sami got mean and tough?
Chad told Stefano that “Sami got tough and mean living under your roof,” then he compared her to Abigail, stating, “That’s not Abigail.” For one, Sami Brady and Abigail Deveraux are two entirely different creatures and two, Sami Brady was mean and tough since her first appearance in 1993. Nothing changed when she moved into the DiMera mansion. What bugs me about these conversations is that it feels as though they’re trying to shape Chabigail into EJami. They’re not EJami!

Bridget who? What?
What the freak was the point of the letter Abigail got from Bridget’s daughter from Ireland? Did anyone understand that? Did I nod off for a bit? Perhaps if they used less flashbacks of Chabigail in bed (and Ericole kissing) they’d have more room to actually explain what’s going on in the story. Grr!

She’s still sensitive?
It just doesn’t fit that Jennifer Horton would be so over-the-top melodramatic when JJ claimed he felt he was going crazy. What he said was just a euphemism. It’s allowed and normal and Laura Horton hasn’t been mentally ill for more than a decade so instead of telling JJ off, it’d have been helpful if she would have actually listened to her son and talked to him rather than live in the past. Ugh. This ‘make Jenn Jenn crazy’ story better be good.

He skipped a step.
The little pot stirrer, Derrick, returned for five seconds, spouted off about the coming out article to Paul and left. It was an odd scene, one that I admit I had trouble focusing on but he actually said something that resonated. Many times I recall wishing that Will would have sown some wild oats before settling down with Sonny so that none of this would happen. And in a surprise twist, Paul was the one who actually did Will a favour by bringing this up to Sonny. Sonny taking partial blame for their issues was pretty admirable since he knew there was a chance this would happen. Understanding someone is the first step to forgiveness. Whatever happens, this was a good scene. I say whatever happens, knowing that Sonny’s leaving the show and because this sudden epiphany for WilSon gives me an uneasy feeling about Sonny. I don’t know. Maybe it’s just indigestion.

The triangle.
Last week in Deconstructing DOOL I polled Soaps’ “Days” readers and learned most didn’t want to revisit the Dan/Nic/Eric love triangle and many are tired of how pious, judgy and boring Eric can be. I’m not a fan of how suddenly Nicole’s “good enough” for him just because she tried to figure out what Serena and Xander were up to. She hasn’t changed so his interest in her is disconcerting. At this point I’m not sure I want either judgmental man with her, but it was a refreshing surprise to have her professing her love for Daniel to Eric instead of waffling.

Stuck on revenge mode.
Paige was fun the first few days she learned that JJ did her mamma but now she’s just stuck in first gear. Following JJ around and belittling him is so unbecoming of her and having her focused on taking revenge is surprisingly not that entertaining. Is her plan to set her mother up and then sleep with her boyfriend? Ew!

Theresa’s competition.
Who was the genius to hire an attractive baby nanny?

There are a lot of characters leaving “Days of our Lives” so Corday can make room for the new writing regime to get back on track writing for the vets, for characters we know and recognize. Though in the past, many times, Corday has said the same thing about trying to turn the show around, I still have faith it’ll happen. I have to or why bother to watch? It gives me pause, knowing that none of what I just ranted about may even matter by September. Let’s hope. What are your thoughts? Vote. Do you believe Days will get better?

This is just my opinion. It’s not wrong or right and I would love to hear yours! Leave a comment below.

Victor, "It's like living in an episode of "Honey Boo Boo."

Maggie, "Can it Theresa. Victor only says what everyone thinks."

Maggie, "What do you think we're idiots? That we have amnesia? Don't forget. I've got your number, cookie."