Daniel Cosgrove and James Read to leave Days of our Lives 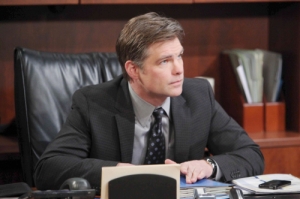 Rumors have been circulating that “Days of our Lives” stars Daniel Cosgrove (Aiden) and James Read (Clyde) could be exiting the series by the end of the year. On Twitter, Cosgrove told fans attending an event in Montreal this past weekend that his contract had not been renewed and that he had already completed shooting. Remember they tape six months in advance. This has not been officially confirmed by the actor or the series. Cosgrove joined the NBC soap in 2013, quickly becoming a love interest for Hope (Kristian Alfonso). If the rumors are true, the character’s departure may tie in with the return of Peter Reckell as Bo.

James Read’s departure will occur around the time of the show’s 50th anniversary.The actor will wrap up his stint as Clyde Tuesday October 20 after joining the cast in July 2014. Soaps.com will update you as more information becomes available.