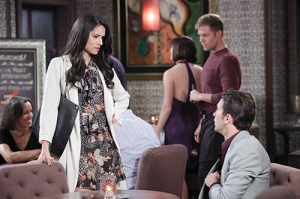 This week certainly wasn’t hurting in the excitement department, though the issues of pointless scenes and half-told stories still persist. My blog may be rantier than usual but I’m hanging in there!

Zoe’s not stupid.
When I said I wanted to see more of driven and edgy Zoe, I didn’t mean they should suddenly transform her into a brainless dimwit and have her flirt outrageously with her boss. Gross. But of course that’s how the current writing regime rolls. They often write women as strong and independent and then turn them into bimbos. What a letdown. I couldn’t suspend disbelief for one moment of that scene, thinking Zoe’s too ambitious to let anything ruin her position at Sonix.

Drowning in the ‘poor me’ pool:
Brady really went off on Theresa for not having her apartment ready for Tate. I’m not sure what he was expecting considering Theresa can barely get her arse out of bed to go to work on a daily basis or even stay longer than an hour once she’s there. And now we’re supposed to believe that after eavesdropping on her at the park he now sees her in a new light and is falling for her ‘poor me I don’t know how to be a mother’ shtick. Hasn’t she had time to get some books, take a class, and call some friends with kids or even Google how to take care of a baby? Lazy whiner!

Pointless scenes?
I vaguely even remember Caroline meeting Serena which is why it felt so out of the blue that she showed up on her doorstep and was so over the top dismayed to learn Serena and Eric were toast. If the relationship between Eric’s grandma and his girlfriend wasn’t there to begin with why write in that scene?

What was the point of Eric telling Daniel about Serena using them if not to discuss it – in detail? Each time Daniel asked a valid question, Eric shut him out and acted as if he couldn’t tell his secrets or that he didn’t want to gossip. Then he topped off his cryptic behaviour by asking Serena what he was supposed to do now, knowing she lied to him and used him? “Turn the other cheek?” Um I don’t even know what to say to that.

Paigey-girl.
I laughed aloud when Paige told Kayla the reason she didn’t want to work at the hospital is because she’s worried she’ll run into Jenn, Abigail and JJ. Um and working at the yoghurt shop in the Horton square where all the Hortons hang out is better? If she’s going to live in Salem she’s going to see Hortons. She’d have been better off taking her momma’s money and hightailing it to Stanford early. In fact, it’s remarkable that since she wants to run away from her problems that she’s staying in Salem. What do you think? Vote on what Paige should do!

Blunderful.
Last week in Deconstructing DOOL Nicole used her investigative skills to quickly find out Xander was a murderer. This week she dug deeper but when he turned up at her office after she knew the guard went home sick, she took an extraordinary amount of time wondering how he got into her office. Then, not only did neither Eric nor Nicole look for ways to fight their attacker, instead, they stood around whispering. Doh! Lastly, did the writers seriously just rewrite the Ericole scenes from last January when they were locked up in Daniel’s basement by Chyka and gassed?

Stop skipping the good parts!
What a disappointment that the writers skipped over the good stuff – the scenes of Will and Sonny in therapy. And suddenly are into a story where Will is what – manipulating his therapist? When did that happen? How? Will kind of sucks at manipulation! But it doesn’t matter how much manipulating he does. It’s going to come out and my guess is that the only way Will is going to get Sonny to stay with him is to tie him up the way Jan Spears did with Shawn Brady.

Dumb and dumber.
What grown-assed woman details cheating and an obsession in a diary? It’s just so unbelievable and too obvious to anyone who could have walked into that room except for oblivious Ben who sat right in front of the screen and noticed nothing!

There you have it – please feel free to write a comment with your own thoughts on this week in Salem!

Best lines of the week:
Nicole, "I'm with the firm of Connery, Moore and Dalton."

Anne to Theresa: "I'll help ya raise the little Tater-Tot."

Anne, "With Brady’s main squeeze gone, he’s going to need somebody to scratch his itch."