Jenn and Dan are friends this week. And let me get this straight. Daniel’s going to – oh how did he put it – give Eve an ultimatum. Either she leaves Paige and JJ alone or he’ll tell everyone she did JJ. That’s blackmail. So it’s okay for Daniel to blackmail someone but Nicole has to be Ms. Perfect? There’s a doc who doesn’t practice what he preaches! It’s almost fun to watch him squirm when Nicole continuously rebuffs his requests for another shot.

Xander.
Xander was once again made to feel like a thug when Victor asked him to make sure the mansion was secured. It was harsh when he told Xander to make it look as though he’s just a nephew visiting. “No one important.” If he keeps this up, Xander could easily be swayed to double cross him.

Going public.
Adrienne and Lucas stated they’re ready to ‘go public’ with their affair but she’s still living under the same roof as Justin and they haven’t decided what to do about their situation. It’s surprising that flaunting their affair is their next step. They sure move fast. So tawdry!

Aiden: "Yeah I hear you're really into cruises.”
Aiden got to use a pretty funny line. I mean what else is a person to say to Doug and Julie when they pop up in Salem after twenty-three back to back cruises. At least Doug was singing to Chase which was adorable. It’s really unfortunate they’re not around more permanently. Hint hint… What do you think? Vote if you want Julie and Doug on Days permanently.

That's all I've got. Please feel free to share your own opinions about the show this week in the comments below!

Will about visiting Poplar Bluff, "Take in the local ambiance and sample the Possum Stew?"

Eve to Cole, "We need to eradicate JJ… That means get rid of him." 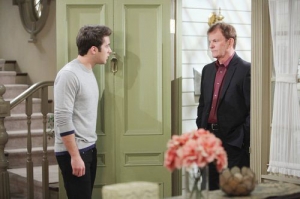 Some storylines sizzled this week while others fizzled…

Sami Junior.
Will was rude and imperious when speaking with his editor, Zoe, about his displeasure about his impending trip to Poplar Bluff to get the dirt on Clyde Weston. Though cringe-worthy, it fit into his new personality quite well and left a bad taste in viewers’ mouths. He isn’t the only one who has poked fun of Poplar Bluff though they’ve never been there, which is ironic since Salem’s not exactly a vast cosmopolitan city. For once though, he was honest with Sonny when he said he had no choice but to go on this trip and write the Weston piece. It’s a shame he didn’t confess to Sonny his reason behind it was that Weston threatened Gabi. Will should have gone directly to Rafe and Hope with that bit of information. In last week’s DOOL rant I talked about how Will’s arrogance pissed Clyde off but this week he’s singing a different tune. He must have set something in motion for Will when he visits Poplar Bluff. That can’t be good.

Where in the world is Stefano DiMera?
Chad’s right. Abigail wants him so bad that she keeps making up excuses to go to his place in order to be with him in order to clarify why she was there the previous visit. It’s so obvious. I love how he kept searching the room, even looking up on the ceiling of all places for Stefano. Meanwhile, Stefano was in that same office he was in a couple of months ago which could mean he has been in Salem more often than we knew. Ah secret rooms are so much fun!

A new vendetta has commenced.
Stefano blames Marlena for Kristen’s death even though he doesn’t know what happened at the castle when Kristen fell. He doesn’t subscribe to the ‘innocent until proven guilty’ philosophy which means Marlena had better watch her back!
I find it really unusual that none of those who know Kristen fell out the window has suspected if she could still be alive.

Speaking of vendettas…
Eve sure kicked things up a few notches. It didn’t take long for Cole to plant drugs on JJ. Same old. Course Salem PD won’t care that Cole’s fingerprints are all over that baggie, just that the weed was in JJ’s bag. I guess JJ’s not going to San Jose after all now that Roman’s at his door ready to search his things. He can credit psycho Eve for ruining his education because there’s no way he’s going to San Jose now. Unreal!

Oh Danny boy.
Daniel told his mama about his argument with Nicole and how it was his fault, (which it was) but before he could finish, she jumped in with, “I’ll be the judge of that,” which basically means she thinks her son is a poor judge of character. How condescending! Maggie can’t remain impartial because she probably still thinks he and Jennifer should get together. 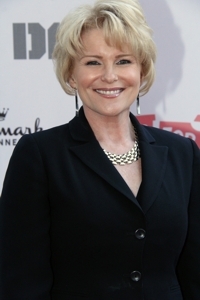