Daniel.
Maybe Nicole was right that Daniel’s still not over Chloe hurting him because why else is he stuck on Nicole being hung up on Eric? In last week’s Deconstructing DOOL I suggested Nicole might want to find someone new. And she did. But how long is this Xander guy going to be around? Hopefully she won’t use him to make Daniel jealous.

A Nu-EJ of sorts.
Paul Telfer, who just finished a stint playing Victor’s henchman Damon, got a new haircut, a new wardrobe and is now appearing as Xander, some bad boy Eric and Serena met in Africa. Of course in line with Serena’s plot driven storyline, we already have more questions than we’d like about who Xander is and what’s going on which makes this insufferable storyline even harder to take. If Xander’s bite is worse than his bark, why didn’t Serena just give him the diamonds or give them to Navida? Instead, it’s likely Parker will find them and use the ‘sparkles’ in a painting for his daddy. On another note, Xander mentioned hiding the diamonds from Interpol. Could this be the case Bo’s been on that brings him back to Salem?

Paige and JJ, Jenn and Eve.
JJ and Eve’s storyline is coming to a head with Daniel finding out that JJ and Eve had sex. A frantic Eve found an ally in Cole of all people, and Jennifer wishes Alice was there because she’s second guessing her decision to encourage JJ to get back together with Paige. I’m pretty sure it was a bad idea since Paige is sure to find out the truth and it’ll make it ten times worse knowing that Jenn with whom she trusts kept it from her. Her whole world will be shattered and there really will be nobody to pick up the pieces.

Last thoughts...
Where the hell is Rafe and why is he so underused? Last week the majority of voters didn't find Daniel's shave sexy. This week I'm asking: Do you miss Rafe? Vote.

This is an opinion piece. Please feel free to give your own opinion in the comments section. Don't be shy! Have a lovely weekend.

Xander to Eric: “I’ve always thought you were wasted on the priesthood.”

Not much happened this week. The storylines aren’t captivating and too many characters are aggravating the viewers. Let’s get to it.

Petulance is so unbecoming.
Will was self-absorbed and desperate as his insecurities ate at him all week. It’s annoying that he keeps trying to push Paul out of Salem because it doesn’t matter where temptation lives. He can’t see that through the thick green smog of jealousy. At least he had Tad to talk to which meant we got to see Tad for a whole two minutes, though it didn’t seem to help quell Will’s fears. The minute he heard Sonny was with Paul he assumed the worst. It was an interesting turn of events to have Paul take full blame for manipulating Will into bed with his charisma and baseball prowess. Good point though Will could have said no.

Chalk one up for the bad guy?
It really was sweet to see Chad and Theo hanging out but soon Chad showed how much he’s learning under Stefano’s tutelage by manipulating Theo and then Abigail. His manipulations are sort of high school but they seem to have planted a seed of doubt for Abby. I’m not sure if it matters or not that Ben likely didn’t read Jack’s book. I mean is it a requirement to dating her?

Out of the blue, Ben invited Abigail to move in with him. Thank goodness Abby had the good sense to say no, but it begs the question: Where is this all going? She always has two guys vying for her attention yet the storyline never goes anywhere. There’s virtually no intrigue to keep viewers engrossed.

Brady’s top-secret attack?
Why did everyone fall all over themselves to agree to keep Brady’s attack a secret yet Roman told Nicole, Eric and Melanie told Serena, and Nicole told Victor. What’s the point of telling anyone or upsetting them if they can’t even support him? Better yet, why the hell is it even a confounded secret in the first place?

Nurse by day, detective by night.
If Melanie truly didn’t want to deal with Theresa she wouldn’t have gone over to her apartment after receiving the text Theresa sent her that was meant for Brady. She’s fueling the fire. What did she have to gain by going there? If she had let it be, Theresa would have forgotten about it or at least thought Brady wasn’t interested by his lack of response. Instead, Nancy Drew rushed over to her archnemesis’ place and caught Clint with vials of blood and Theresa’s arms full of holes. She suspected pretty fast that Clint’s the one taking blood samples from Brady and Theresa but didn’t find him dangerous or make a move to call anyone. She didn’t even tell Theresa and Brady! What the hell? Even though she couldn’t prove anything she still should have told them and had Daniel check Theresa’s blood for a sedative.

Theresa.
Ignorance thy name is Theresa. Our resident bad girl found Clint’s brush off letter and asked, “How could you do this to me again?” Sigh. Um because you let him. 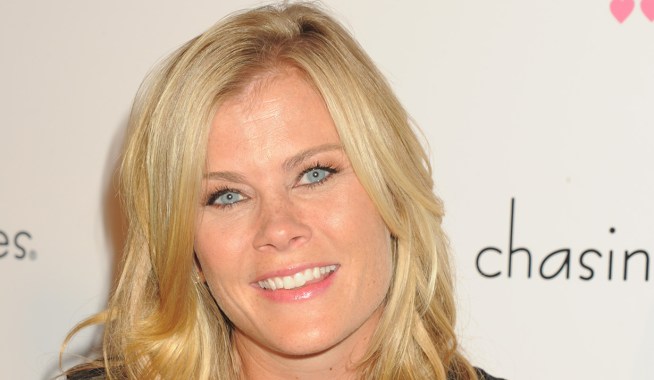