Vote in our poll of the week: Days Poll: Who should Paul end up with?

Pushing her into Lucas' arms.
It's hard to say much about Lucas and Adrienne's growing feelings for one another. It's been enjoyable seeing them together and getting to know each other better. When they almost kissed I was surprised that I was kind of into it especially because I like Justin and Adrienne together. I'm curious about your thoughts.

Jerry! Jerry!
Anne’s right. Jordan, Clyde, and Ben would be prime candidates for the “Jerry Springer Show.” Last week in Deconstructing DOOL I wondered why Ben didn’t tell anyone what Chad said to get him to attack him but this week it became clear that it’s all plot driven. Abby found out by overhearing it and Chad apologized way too many times, losing his cajones along the way. He’s sort of the bungling Bart of the DiMera brothers only not so endearing. Stefano should be embarrassed. His many apologies are as empty as Ben’s handsome head. It was outstanding of Abigail to tell Ben that his sister’s an adult and can make her own decisions. It’ll give him something to mull over when he’s in one of the Salem cells. Boy, Trask must be bored if she wants to prosecute a bar fight.

I’m an adult now.
Though it isn’t easy to see Paige as an adult, she essentially is and good for her for standing up to Eve, though having it right in the hub of things at Salem U was the wrong setting. How embarrassing. Paige is another one, like Nicole, who just won’t take ‘get lost’ for an answer. They should team up to get their men.

No longer the most annoying person in Salem.
Speaking of Jenn. She’s still pretty nosy but she and Daniel as BFFs is a nice change from her being seen as the shrew of Salem and having her give Nic Nic advice on getting Daniel back was a nice touch.

“Who did it with JJ in the conservatory?”
Theresa was really funny this week. Her focus when not on herself is entertaining. Her learning that JJ cheated on Paige gives her something to have a little fun with but if she finds out her sister is JJ’s lover then will she team up with Jeve to keep it away from Paige? Will Cole still try to help Paige find out who JJ “slept” with? This storyline reminds me more and more of when Nick cheated on Chelsea with Billie. Oy. Here’s to you, Mrs. Robinson.

Don't forget to read about the Daytime Emmy Pre-Nominations and please feel free to rant or rave in the comments section about this week. Happy Friday!

Theresa to Abby on why she should get her phone: “It might be some married man who has fifteen minutes to spare.”

Eve, “It’s not a game, Theresa.”
Theresa. “Yes it is. Who did it with JJ in the conservatory?”

Cole to Paige, "Score you some weed?" 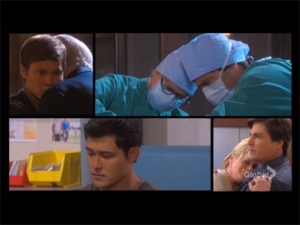 It’s been really easy to connect the dots with the storylines lately which makes it easier to tune out or fast forward, yet at the same time we’re seeing them move into sweeps by ramping up Aiden’s mysterious past, Paul’s love triangle, and Serena swindling an ex-priest.

Our whodunit.
The minute he stepped into the lake house, Aiden flashed to hearing a woman scream and then a shot being fired. Would a person prepared to commit suicide scream first? Either Aiden did this or Chase did it and blocked it out and that’s why Aiden was so concerned about his son revisiting the scene. If that’s the case I hope that Chase doesn’t remember. Ever. How horrible.
Argh Aiden probably did it and I’m just deluding myself. What do you guys think? Am I the only one who doesn’t want it to be Aiden? Wouldn’t it be way too obvious of a storyline? Unless there’s a huge twist. What would you like to see happen in this storyline?

The Elephant in the room.
Some fans have taken to calling Serena ‘Shrewena’ which is all in good fun. She had a chance to go to the beloved Green Mountain Lodge and didn’t even take Eric up on it, which makes it appear as though she’s not interested in getting the ex-man of the cloth into bed. Eric’s been a real piece of work lately but even so, he doesn’t deserve this. Now that nothing or no one is holding her back, Nicole needs to get to the bottom of Serena’s mystery and redeem herself. She needs to stop begging Daniel to take her back.

Confirmation that Clyde’s alive?
Innocent Sonny not only found Will’s been cheating on him with his ex-lover, but he was stabbed (by Clyde’s hand?) before he could even confront his husband. On top of all that he recalled hearing that Paul thought the sex with Will was just ‘nice’. Ouch. Paul could have told Sonny that the guy he bedded was wild and crazy in bed but let’s face it. It’s our paisley shirt and vest lovin’ young William. He’s pretty much the Opie Taylor of “Days” which doesn’t exactly scream out ‘wildcat’ in bed. Wait until they all come face-to-face!

Will’s certainly Sami’s son. His lack of ethics knows no bounds. First he told Kate who he was interviewing, and then allowed her to read his first draft, he took Paul to bed, and then let Paul read the final draft of his article. All this and it had better be a fantastic piece of work. It only took a month and a half to write.
Worst line of the week: Will to Paul about his article: “I’ve done better work.” Yep that’s what the subject of an interview wants to hear. 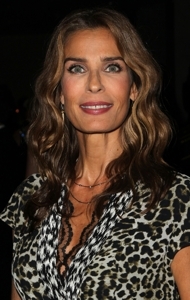