Katie storms into Bill’s office and lashes out at him for going against his promise to stay quiet.

In Rick’s arms at Big Bear, Maya thanks him for his love. He assures Maya nothing has to change and learns how Nicole, Carter and Brooke found out. Rick’s phone buzzes with alerts. Maya confesses that Ridge knows as well, leaving Rick furious. He doesn’t want anyone talking behind their backs. As Rick goes to make a call, he sees the story on Maya. She wonders what’s wrong and grabs her cell. Rick calls Bill and demands he take down the stories or he’ll destroy him. Bill refuses and insists he’s only running his business the way he sees fit – much like Rick does with Forrester. Once he hangs up, Rick prays Bill will listen to him and blames Ridge as well. He wishes Maya would have told him sooner but promises to take care of her.

Katie and Bill continue to argue their points at Spencer Publications. Katie admits she expects Bill to do the right thing from time to time. What he did to Maya will never be right! Bill calls Katie a hypocrite then takes a call from Eric, who brings up the organization GLAAD. Eric warns they’re not going to be happy about the venom he’s spread about Maya and urges Bill to ask his sister Karen for verification. She’s one of their biggest donors.

Bill and Justin discuss Maya at Spencer Publications and how Rick has no idea about her secret. They joke, as Bill looks at photos of Rick and Maya. They call in some employees and debrief them on the story and their source, Nicole. One employee is aghast that Bill wants to splash Maya’s life all over the tabloids. “Maybe you’d like to write about kittens and flowerpots,” Bill says. The man walks out, refusing to be part of Bill’s plan. Bill wants the story released immediately with the main point being that Rick got what was coming to him. Bill and Justin look at slides containing photos and headlines. Justin reminds Bill this can’t be undone once it’s published. Bill pushes forward and Justin orders the article live.

Days of our Lives Spoiler Video: All Along 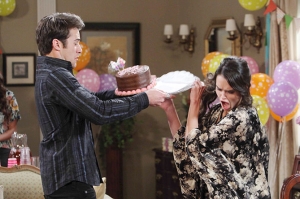