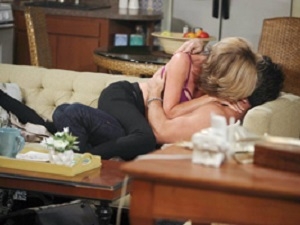 Dustin Cushman here filling in for Christine Fix while she’s on vacation. Tis the season in Salem for Horton balls and the reading of The Christmas Story. “DOOL” aired a new episode every day this week, though due to the holidays the storylines really didn’t advance at all. Let’s get to dishing the week that was.

Big bad Clyde.
Both Chad and Rafe are out to save the fair maiden Jordan from each other and from her hayseed father Clyde. I wish someone would save us from this story. That’s all I have to say about it.

You’ll want to shoot your eyes out.
JJ and Eve’s venomous confrontation once again resulted in the two having sex. The first time was bad enough, so come on! After JJ went off on Eve and told her that he hated her and one day Paige would hate her too, I actually found myself feeling sorry for Eve. Don’t worry, that feeling didn’t last long. However for a moment we saw a glimpse of the damaged Eve who wants desperately to be loved, even if by the wrong person. That was the Eve from long ago who I fell in love with. JJ on the other hand, I don’t feel one bit sorry for him at all. I see no way for JJ and Paige to make their relationship work at this point, though Jack and Jenn did after he bedded Laura, so who knows. Take Soaps.com’s Days Poll: JJ should?

A man like me.
“Days” has been beating the viewers over the head with the idea that Aiden is hiding a dark secret, and Doug’s trip down memory lane this week was the icing on the cake being thrown in our face. Hope seems to attract men like this, from Franco to Patrick Lockhart to her original fiancé Larry Welsh. Bo was there to save her every time before, but I don’t think he’s going to be able to this time. I was really beginning to like Hope and Aiden as a couple, so I do not like that they are turning around and repeating history again.

Liar liar pants on fire.
Will and Sonny are headed for major trouble as we approach their first anniversary. They are working my last nerves lately and I want to shake them both. I didn’t think Will’s lie about why he came home was all that awful, not in comparison to Sonny constantly contacting his ex. However Will not taking Ari to see Gabi was lower than low. Now we have Sonny skimming money from their joint account to pay debts for his new club. Oh brother! Eventually one of these two is going to end up in a compromising situation with Paul, we can see this coming from a mile away.

Saint Serena and Father Finicky.
Serena is simply too nice and too perfect, so she has to have one hell of a hidden past. If and when whatever she is hiding is exposed one has to wonder how Eric will react. Lord knows Eric’s standards are impossible for a mortal to maintain. His constant focus on Nicole as the destroyer of his life has completely turned me against the two as a couple. Don’t get me wrong, Nicole is no saint, but Eric isn’t just beating the dead horse, he’s jumping up and down on its grave daily. I’m over feeling bad for him.

Almost, but not quite.
Christmas seemed to melt the ice around Theresa’s heart, as she presented Caroline with a touching gift. Like her sister Eve, we get glimpses of a character we want to like, until they turn around and do something so horrible that we want to spit at them through our screens. Even Kayla called her out on this. Speaking of Kayla, it was nice to actually see her child Joey with Steve for once. I expect we’ll see him again in a few months and he’ll magically be an adult by then.

Have yourself a zen-like Christmas.
Doug and Julie are staples on “Days,” and it’s always good to pull out the vets now and then, especially for the holidays. In last week's Deconstructing DOOL Weekly Blog Christine noted how good it was to see Kimberly again. I agree and absolutely loved seeing Patsy Pease (Kim) and wish we could have gotten Charles Shaughnessy (Shane) too. However Doug and Julie are like those relatives you don’t always want to have to see every holiday season. This year much to my surprise I got a good chuckle out of Julie bending everyone’s ear about visiting Katmandu and finding time for quiet meditation time. I was expecting her to start putting little Buddhas in everyone’s stockings honestly.

The Black is back.
Christmas brought John Black back to Salem, and if we can trust his words, he's here to stay. It's not John that I worry about, but the writers and what they plan to do with his character. John and Marlena have always been my favorite couple on the show, and the writers have destroyed them over these past few years. Here is hoping 2015 sees John is here to stay in Salem. Who knows, maybe John will finally figure out who he is too. I wonder if he has ever thought about taking one of those Ancestry DNA tests to find some long lost relatives?

Nicole upon finding a book in Serana’s room, “The Curse of Colonialism in the Congo… she probably has 50 Shades of Grey under the mattress."

Nicole after giving Melanie a fruitcake for Christmas, "I saw it in the store and it just screamed Melanie to me!"

That's it for this week "Days" fans. Matt Purvis will be doing the blog next week, and the week after Christine will be back.