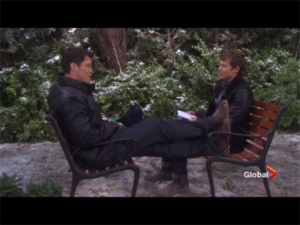 The holidays are fast approaching in Salem but there are a few who are still on Santa’s naughty list. Let’s get right to it!

The mystery continues.
This week it was even more difficult to decide whether or not Aiden murdered his wife or if there’s another secret that still hasn’t been revealed. I found myself wanting to believe him and wanting Hope to believe him because it’s better than the thought that Hope might have divorced Bo for a murderer. The doubts remain, especially after that terse call Aiden made to Bree, warning not to mess with him because she knows what he’s capable of. Is that just him warning her not to slander his good name or warning that she’s next!

Is Aiden on the naughty list? Too soon to tell!

Enabler much?
Daniel’s on Santa’s nice list but he’s too nice. He’s a real push over when it comes to Melanie. He coddles her as though she’s Parker’s age and not the grown adult she is. Maybe he does it because he missed out on her entire childhood or maybe it’s because she acts like a kid so it’s easy to treat her as such. Either way, it ‘aint’ good. His purchasing gifts on her behalf for Christmas went above and beyond what a father should do for his adult child. She could have easily shopped online and had presents delivered directly to Dan’s address – rather inexpensively. The silver lining is that Nicole commented on it, saying what we were all thinking, and then it actually made for a cute scene between her and Daniel. Shame she’s still so obsessed with Eric!

Brady to the rescue.
Even Brady’s indulging Melanie. He protected Melanie from big bad Theresa and instead of allowing Mel to go to Seth Burns; he used his pull as a board member to get her nursing job back. Isn’t that sort of unethical? Oh well… Isn’t Anne being head of HR sort of unethical? Melanie had better listen to those around her and watch it around Theresa. We have it on good authority that she’s good with a fire poker. She’s also on Santa’s naughty list.

Oh boo hoo. Why me?
Melanie unleashed on Theresa several times in what appeared to be the same day, even after she was warned not to and agreed to stay far away from Brady’s ex. She pushed and she pushed and then wondered why Theresa attacked her. Who could blame Theresa, even knowing who Theresa is? Then we had to contend with Theresa whining because nobody’s on her side and all these horrible things keep “happening” to her. What a laugh. What a child. Even Anne scoffed at her griping.

“Oh dear! Oh dear! I shall be too late!” – White Rabbit
Serena’s been in town for less time than Melanie and taking up all of the screen time. We already know more about her than we do about Jordan Ridgeway, Ben whatshisname, or Clyde Weston. They’ve made Serena perpetually late which could either be endearing or annoying. She’s certainly not afraid to go after what she wants. She had no problem dishing out to Anne what Anne usually dishes to others on a regular basis which was confusing. She’s yet another newbie in the already long list of newbs nobody cares about. The powers that be are doing exactly what they did with Jordan, Ben, and Clyde, and focusing on them too much too soon which only succeeds in pissing off the fans.

In the December 12 Deconstructing DOOL I wondered if Eric still had feelings for Nicole. This week he admitted he’s still angry with her. While it’s being written very realistic in how long it’s taking Eric to forgive what Nicole did, it’s also annoying for most viewers who want him to move on. Move on Eric!

The highlight of the week: Jenn Jenn’s comment about Anne wearing the same wrap dress as she always does. It was exceedingly funny yet inappropriate, and deliciously ironic coming from the worst dressed person in Salem!

Getting ‘the real’ story and maybe something on the side?
Zoe and Mr. Price might be at the top of Santa’s naughty list. They’ve no integrity and Will has been shown to have questionable scruples, so it was fitting that they’d ask him to do the expose on Paul. They also must figure that because he’s gay, he can find “the real story” and get Paul to come out. Already we can see this story is moving toward some weird triangle with Will removing his wedding band and locking eyes with unremittingly horny Paul! What if Will cheated on Sonny with Paul and Sonny cheated on Will with Paul? Hehe

Side note: Paul’s shoulder seems to magically have healed way faster than any other rotator cuff surgery in the entire world. Boy that Dr. Jonas’ hands really are magic.

Planting seeds.
In my December 5 Deconstructing DOOL I said, "When Lucas and Adrienne were gossiping about their sons not communicating, it occurred to me that Adrienne’s lonely and Lucas is single...not that I want Justin hurt but the seed felt planted." This week Adrienne commented on how difficult it was to get in touch with Justin. If it looks like a duck...

What are your thoughts on this? Days Poll: Want to see Lucas with Adrienne?

Victor vs Clyde.
The hayseed doesn’t stand a chance. That’s all I have to say about that!

Eve’s subterfuge.
Overall, it’s been nice to have Eve and Paige off canvas. It's been good to see Kimberly Donovan return but a little sad that it was only to prop Eve's story. Shane's doctor was right. Eve's a good liar. That's not the best compliment. The highlight of this story was Rory’s return. Rory’s always written consistently fun and silly. He has a personality and is endearing. They should build on characters such as Rory and Tad and give Eve a lump of coal in her stocking for Christmas.

Harassment.
Kate got what she wanted. Jordan’s out of Rafe’s life so why does she persist in harassing Jordan? And why does Jordan let her? Somebody should teach Jordan the art of sparring without bringing up Kate being a prostitute 600 years ago. Who cares! Do people really act condescending toward prostitutes anymore?

New sets:
It looks as though we’ll be seeing the University hospital set a lot in the future considering almost every Salemite works there. It’d be nice to see Hope and Bo’s house again or Aiden’s. Having them get a room whenever they want to talk or get intimate is rather unconventional for a mature couple. Fans are missing out on the snuggling on the sofa and normal home life.

My last blog of 2014! You’ll see blogs from Dustin and Matt coming up while I’m on Christmas holidays. Feel free to leave a comment or two about this week’s Salem happenings and have a wonderful holiday!

Jennifer, "There’s Anne Milbauer over there…In yet another wrap dress."