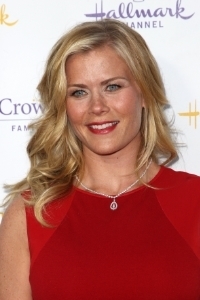 Eric was a little upset this week after he got a call from his sister Sami asking him to share all the dirty details about his rape by Kristen and the devastating fallout, with the producers of her reality show. Even though none of it was his fault, reliving it all just as he is moving on with a fresh career and a new apartment would mean heartache for him – and anyone who cares about him – no matter how healthy it might be for him to share his side.

And really, there’s no telling what devilish deeds Will and Sami are spilling while working on their film in Hollywood, so chances are Eric won’t be the only person in Salem struggling over their potential storyline, especially as told through their jilted filter. From Abigail’s infidelity to Nicole’s penchant for kidnapping, just about everyone on “Days of our Lives” has something they would rather not be shown splashed across the big screen.

So which resident of Salem should be most worried about a call from Sami’s producers? Vote one of our scandalous picks in Soaps.com’s “Days” poll, or add your own ideas in the comments below.

Days of our Lives Spoiler Video: I...