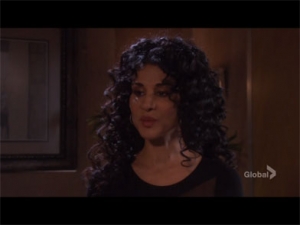 Having no Thanksgiving in Salem apart from the mention of a dinner party at the Kiriakis mansion made viewers worry about what’s to come for Christmas. Ignoring Thanksgiving at the DiMera mansion, Kiriakis mansion, and the Horton homestead meant ignoring a prime opportunity for providing comic relief, opportunity for manipulations, JJ making more weed doughnuts, canoodling with the wrong person, backstabbing, and maybe more baby stealing. Thanksgiving or not, the week was ho-hum. Even with Melanie’s return, the bag full of money, and newbie Serena showing up in Salem, viewers are still complaining that our show is not cutting it.

Gut instincts?
Last week in Deconstructing “DOOL” I talked about how much Melanie kept staring into her bag full ‘o’ money and pondered, no way did she get that through customs. This week we’re over that and wondering how it is that Melanie suddenly knows that the only time lately Chad is nice to someone is when he wants something. She’s been out of Salem for two years and in town for two hours. She saw Chad for about two minutes. Is this her gut instinct talking? If so, it’s a good instinct because not only is he nothing like the original Chad whatsoever, but Stefano confirmed Chad’s using Jordan. Why we don’t know and most don’t care. The recast is still causing quite a commotion because the actor is playing Chad as if he’s more like EJ, not the goofy and likeable original Chad, and the writers seem to have forgotten who Chad really is as well. One year with Stefano, unless Stefano brainwashed him, wouldn’t have made Chad forget the good person he truly is or was. It might have been better for all if they introduced yet another son of Stefano’s to account for the changes or at least had Stefano talking to Rolf about the brainwashing. That’d be classic “Days.”

Red alert! WilSon hasn’t spoken in three days.
Everyone in Salem knows that Will and Sonny had issues connecting by cell phone for three entire days. Oh the humanity. When did everyone become so melodramatic and annoying? Both guys have jobs and other commitments, so it’s not as though this is any surprise. Bo left Salem for an entire year and people made less of a big deal. I’ll concede that Marlena’s call to Will, reminding him of his commitment to Gabi was the right thing to do. As busy as he gets, Marlena’s right. Photos and video updates from Arianna is the only thing keeping Gabi going in prison. Some viewers are feeling a little crabby about Will this week for the way he has been treating Gabi and that nasty phone call he had with Sonny. I think some might have not so secretly wished someone smacked him upside the head for being a wanker. Understandable but he did seem quite harried. It’s easy to get perturbed when you feel the walls closing in with pressure from all sides. As for the time difference, it’s only a few hours. One of my best friends moved to Germany this summer for a year and we talked more this weekend than Will and Sonny have spoken this month! Of course the only reason behind this forced storyline is that one or both are cheating. We already know Sonny did. What about Will?

When Lucas and Adrienne were gossiping about their sons not communicating, it occurred to me that Adrienne’s lonely and Lucas is single…not that I want Justin hurt but the seed felt planted.

Even though after all this time most don’t feel one way or another about Eve, I had to hand it to her. She is good at using any situation to her benefit. Acting as though her father is deathly ill just to get Paige away from JJ was pretty good.

Trivia: The actors who portray Shane and Eve are 6 years apart in real life.

Jenn’s apron strings.
Jenn tightened her apron strings this week, dying to hear a crumb of an update regarding her son’s love life. So gross. The writers need to stop forcing fans to loathe Jennifer and start giving her a life of her own outside of her kids. JJ has a friend in Rory that they need to utilize instead of having JJ’s mommy telling JJ in so many words or less that the reason he doesn’t understand the decisions he makes is because he’s making them with his penis.

The secret is out but nobody cares anymore.
Rafe and Jordan now know that Kate was behind bringing Jordan and Clyde to Salem. It’d have been better if it came out months ago when we cared. Now Rafe needs to move on from Jordan and be with someone else. He should be a leading man again yet he’s being misused. Instead, we see boring Abby and the Neanderthals clamoring for her attentions.

B****fest 2014.
It feels as though we can’t root for anyone anymore. The vets are underused, the newbies overused. During the cattiness between Abigail, Anne and Theresa at the hospital, it occurred to me that I wasn’t on anyone’s side. How did this happen? Abigail got a few good shots in as did Anne and Theresa. It was a funny scene but shouldn’t we be rooting for one side?

Melanie’s return is supposed to elicit concern for the character’s safety and though it's nice to see a familiar face, it’s hard to conjure up any feeling about the return which feels out of left field. It’d have worked way better if we followed Melanie in Europe for a few weeks and knew her secret before anyone in Salem did. In a bizarre twist, Melanie had a reunion with a brand new character. We’ve way too many brand new characters when the show should be bringing back fan favourites before everyone stops watching. It’s nice to see Melissa Archer back in a soap but did the powers that be fail to notice that the fans have wanted former Salem residents to return?

Aiden’s history needs to move a little faster. Right now all it's doing is ruining how viewers feel about Hope and Aiden’s newfound relationship. It’s enough they suffered through the loss of Bo but fans aren’t happy to see that Hope could be in for another heartbreak.

Lovers aren’t making anyone want to tune in. Ben and Abby are starting out in what should be a lovely long-term relationship but there’s no reason to look forward to seeing their scenes. Nothing grabs us. Instead we get a recreation of an incredible moment between Sami and Lucas from their time in the safe house, years ago. What’s next? An EJ and Sami recreation? Sami and Rafe recreation? The show can recreate any scene they want but it won’t be the same because viewers actually cared about those characters. Acting notwithstanding, the characters don’t evoke any feeling. I spoke with a writer from my team who watches the show - Candace Young. Candi agreed. “There are characters who agitate but have a lot more depth to them and you feel all kinds of things about them.” Like Stefano DiMera during his prime. “But the Anne character, and Theresa, they're just sort of self-centered and crazy, and it never gets any more complex. Anne just agitates too - endlessly - for no apparent reason.” While I don’t want the show to get rid of Anne or Theresa, we all want the writers to give us a reason to care about them – to feel anything for them.

What are your thoughts? Weigh in and share with your friends. Days Poll: Do you care about the characters still?

That’s all I’ve got. Take it with a grain of salt and feel free to leave a comment or two about this week’s Salem happenings!

Stefano, “He is a two bit thug dressed up as a country bumpkin.”

Anne, “I am not a petty person Theresa. I thought you would've known this about me by now.”

Stefano to Clyde, "Is he teaching you to square dance?"