Ex-Days of our Lives’ Alison Sweeney In The Rose Parade 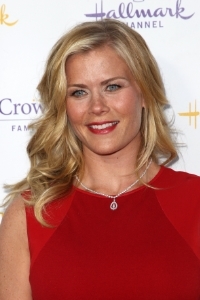 If you’ve been missing former “Days of our Lives” star Alison Sweeney (ex-Sami) you will be in luck this holiday season. The actress, author and TV show host will be appearing with the Medieval Times equestrian team at the 2015 Rose Parade. It turns out that along with Sweeney’s other skills, she is also a talented horseback rider. She will be riding a Spanish horse and wearing a Medieval Times princess costume as she rides in the parade with eleven others.

Check your local listings for when the Rose parade will be airing in your area. The parade will take place in Pasadena on Thursday January 1, 2015 beginning at 8:00 AM. For more information, visit the Rose Parade.

Get all of the details on DOOL’s 2015 Writers Guild Of America Daytime nomination. And then see how Days celebrated 50 years at the 83rd Annual Hollywood Christmas Parade.

Ex-Days of our Lives' Camila Banus...

Ex-Days of our Lives Writer Ann...