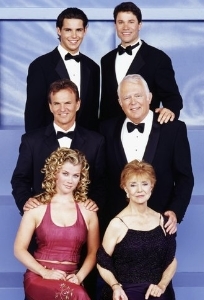 As “Days of our Lives” celebrates 49 years on the air, Soaps.com takes our readers back with a bit of trivia from the NBC soap opera.

November 8, 1965:
The soap was created by husband-and-wife team Ted and Betty Corday and has remained with the Corday family ever since. Soap opera pioneer Irna Phillips (creator of “Guiding Light,” “As the World Turns” and “Another World”) worked as the show’s story editor and William J. Bell (creator of “The Young and the Restless” and “The Bold and the Beautiful”) was a writer with the series for years. Since then it has been helmed by many other notable daytime scribes, such as Margaret DePriest, Sheri Anderson, Dena Higley, Hogan Sheffer, Gary Tomlin and James E. Reilly. The series is currently produced by Ken Corday, Greg Meng, and Lisa de Cazotte. Originally running only half an hour, “Days” was expanded to the full 60 minutes on April 21, 1975.

Longest history.
“Days” boasts a handful of actresses who have been mainstays for decades. Frances Reid played Alice Horton, the matriarch of the Horton family from the beginning of the series until she passed away in 2010. Suzanne Rogers has spent most of the past 40 years on the series as Maggie Horton. And Susan Seaforth Hayes has been playing Julie Olsen Williams ever since 1968.

Daily recaps:
Soaps.com has been recapping “Days” since August 7, 2006. In that episode, Mimi confronted Shawn and Belle about kissing while Steve shocked Delia. Sami and Lucas made out while EJ ate bagels and Bonnie plotted with Kate about how to protect their children. Read our first DOOL Recap: Love and Lies.

Watch recently departed “Days” star Alison Sweeney (ex-Sami) test her knowledge of the history of the soap against a fan’s in this video from “The Queen Latifah Show.” Take a look at how well she did.

Revisit some more Salem history with the latest of Soaps.com’s weekly Throwback Thursday Days Poll: Kristen Fakes Pregnancy. And then makes sure that you’re on top of all of the latest Days of our Lives news.

Days of our Lives' James Scott In...