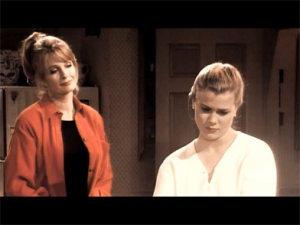 It’s been a week of goodbyes in Salem. Sami and her children, including Will bade auf Wiedersehen to family and then left for Hollywood, Jennifer went to care for her mother for a few weeks, and Kristen said goodbye to Daniel, though she’s here another week. With Sami leaving Salem, we’re sure to see a different show ahead of us and as hard as it is to lose a vet, it’s still an exciting prospect. On with the blog.

Mrs. Robinson.
JJ and Eve shared an electric moment… or whatever when he was massaging her wrist after her fall. Flash forward three minutes and JJ and Paige went on a break because she doesn’t trust her boyfriend. If we flash forward a few more days, we might see Eve and JJ in bed together. You know how things always happen when a couple is on a break. Ross and Rachel from “Friends” remember it well. What would you think if this happened? Weigh in on this week’s Days Poll: Eve and JJ in bed?

Another bloody break-up?
Really? Did we really need yet another round of Dannifer arguing over their non-existent relationship that they ended again in June? We thought these two were long since over. There was no mention of them since September 23 when they discussed going to get coffee. It’s now over a month since the writers have written for these two so what is the point of having another break-up? It’s only causing fans to loathe Jennifer and nobody actually enjoys that. She’s not even written as a character you’re supposed to love to hate. She’s become so hypercritical, so self-righteous. She can’t even see when she’s wrong. And now she’s smoking crack, thinking the only place JJ and Paige can have sex is at Daniel’s apartment. Not a hospital supply closet, TBD’s supply closet, a car, the park, a boat, a boathouse, Horton cabin, under a bridge, in a Salem U dorm room, in the woods… the list goes on. Wake up Jenn Jenn! Thankfully she’s going away for two weeks to be with her mother. When she returns, we hope she does so as the Jennifer we once knew. If she isn’t, we’re sicking Julie on her.

While you were gone…
While HRH Jenn was gone, Kristen and Daniel finally used all of that pent up hostility and wound up in bed. Just like many wanted. It was hot but went sour pretty fast when Brady found them together and they decided they had no business doing each other. What a letdown. Matt (of SOF Matt’s Musings) was hoping that Kristen would use his DNA and clone Dr. Dan.

Sami’s goodbye.
Though I started watching “Days” during Marlena’s 1994 possession, my viewing was sporadic so my first memory of Sami is July 28, 1995 when she fainted at Carrie and Austin’s wedding. This week, after a reign of 21 years on the soap, Sami left Salem for good. I wish all the best to Ali Sweeney! Sami will be back for funerals or weddings perhaps but that’s about it. It’ll sure be a different show without her. She was such a force. Some loved her, some hated her, and some loved to hate her… Either way she provoked some strong feelings and will be missed. There were some heartfelt goodbyes with the exception of her being civil to Abigail. I’d have preferred Sami to have said goodbye to John and Brady instead of wasting time on her deceased husband’s ex-mistress. Now that she’s gone, Ciara’s our new bad girl in training. She finds Salem boring – sometimes it is – except for when it’s not! She’s too young to recall the Sydnapping, and she wasn’t even around for the many times Stefano has returned from the dead, Melaswen, Marlena’s two possessions, Susan Banks’ many siblings, the Gemini Twins… the list goes on.

Slow and easy?
Theresa really believes that Brady wants to take things “slow and easy,” but how does that work when you’re already having sex? Isn’t he really just saying, “Let’s just have a sexual relationship?” That’s all they’ve ever done but she says she wants to take it to a whole new level. What does that mean? Whips and chains? Do you think she’s been dragging Brady to bed in order to get pregnant so she can keep him in her life? It’d be the only way to get to him or his money after he learned she’s the one who hit his dad over the head with the poker! It was absolutely amazing that Brady didn’t have a drink after that and after seeing Kristen in bed with his best friend.

What’s up with Will?
It’s hard enough getting used to a recast but now Nu-Will has changed so drastically, Sonny and I hardly recognize him. Maybe Will leaving town for a while will be good for him and Sonny. Maybe once Will returns the writers will have some good story for them – finally. Or maybe Brian will return…Last week in Deconstructing “DOOL” I said, The show has had every opportunity to bring Brian back and give him a chance with Sonny. Part of me really wants that, especially after hearing Will say, "If things don't work out in L.A. I'll have a reason to come home."

That’s all I’ve got. Take it with a grain of salt and please - have a fantastic weekend! Feel free to leave a comment or three about this week’s Salem happenings! I’m open to all thoughts!

Lucas to Sami, "Whatever gets you out of the haunted mansion as soon as possible."

Theresa to John, “You’re not being very nice to me at all.”

Caroline, "It is impossible to forget Samantha Brady."

Jenn to Daniel, “Stop being the cool uncle.”

Brady, "You're the ultimate addiction, Kristen."