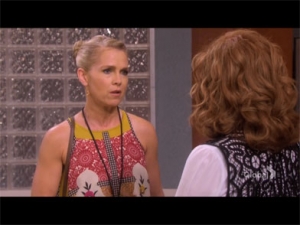 Guilt ran rampant throughout the town as Salemites mourned EJ’s death, the viewers mourned over the loss of what once was Jennifer’s wardrobe, Jordan’s big secret came out and fell flat much like her personality, and Kristen spent the better part of the week trying to stick it to Theresa, which proved to be pretty easy. Not that we were expecting anything else. All in all, it was a decent week with a few hiccups.

Rummage sale.
None of us will ever understand the disaster that is Jennifer’s wardrobe. This week she wore an old apron of Alice’s she dug up from the attic. Matt (SOF Matt’ Musings) wondered if she was trying to emulate one of those Portuguese Roosters, and my friend Gordon said, “It’s like 2 napkins attached to her nipples!” It was awful. Maggie’s black vest was just as bad. It was a cross between hilarity and a travesty that they had Kristen all vamped up with dumpy Jenn in the same scene. Jenn’s cuter than this, so when are they going to make her shine?

Unfinished business.
Jennifer said she has unfinished business to take care of but what was it? Maggie hoped it was Daniel, but we all know, even Kristen knows that Jenn’s too judgey for Danny boy so why are we still messing with this non-couple especially when most of us want to see Kristen in bed with Daniel, even though we’re afraid to admit it?

Eve.
Like Theresa, Eve still has no redeeming qualities which doesn’t bode well. Sure, Paige is a good kid so we can say Eve’s a good mother but even that might be a stretch. And did Eve seriously remind Kayla that she knew firsthand what Jack’s like? She did mean the rape didn’t she? There are no words…
Eve should take a page from Kristen’s book. Kristen’s had no problem striding over to Eve’s to question her about her sister’s secret and plant a bug. Who thinks that telemarketer was likely a DiMera henchman calling in order to give Krissy a chance to hide it? Not that the bug did much good when klutzy Eve stomped on it but Anne’s sure did.

Chordan or Jad?
When the Portmanteau doesn’t work it’s time to call it a day. What to say about Jordan and Chad except they don’t work, Jordan’s too boring for a character such as what we hope Chad will become, but at least she was decent to ask for Abigail’s permission to date him. I’m not sure I’d have gone there at all considering Chabigail’s history but whatever.

The big secret.
Jordan’s big secret also came out this week. According to Clyde, she killed her mother. Since most couldn’t care less about Clyde or Jordan why the hell would a viewer care about what happened to her extended family? We pieced together that Jordan was calling her mother a stupid cow for staying with Clyde the alcoholic beater and then her mother insisted she drive her around while they argued and Jordan plowed into a truck. While Jordan was wearing a seatbelt, her mother, who was either too distraught to remember to buckle up, or who ‘don’t need no stinkin’ seatbelt’, flew out of the car and wound up dead. That’s horrible. Clyde found her crying over her mother’s dead body, feeling that the accident was her fault – something we’d all be saying. It sounds like he then possibly pulled a Paul Mendez (Nic’s father) and threatened to throw her in jail if she didn’t have sex with all of his friends. That’s pretty nasty. She must have been wallowing in guilt and young enough to believe anything he said. But she’s older now so she should clue in that if she is innocent, Clyde has no proof and nothing will likely ever become of his allegations. This story might have worked better if the actress had more range and if the character had more personality. Oh and if the story was completely different. But that’s neither here nor there now that Chrishell Stause posted on Twitter that she’s leaving Days. I wish her well.

Get a loan you entitled little…
Ben hates Clyde so much he’d rather let him pay for his education than get a student loan like everyone else. Er. Right then.

Wilson.
Will and Sonny are quickly becoming the new Dannifer. Will doesn’t think Sonny respects him? Seriously? How can Sonny respect William if he doesn’t respect himself? The show has had every opportunity to bring Brian back and give him a chance with Sonny. The couple had way more chemistry than nu-Will and Sonny. That’s all I want to say about these two.

Paige and JJ.
Another couple just as boring as WilSon and Dannifer are JJ and Paige. JJ overacted when Paige got into his bed. He pulled the sheet up and screamed like a little b**** that the hot girl in his bed wouldn’t touch his private parts. Because all he can think about is that Paige will find out that his dead father raped his aunt three hundred and ninety-four years ago. Really JJ’s about as thick as they come if he thinks Paige wouldn’t be anything more than kind and sympathetic. How boring. It’d have been more fun if Jill had given JJ an STD like Mary Beth, Paige’s ever present bestie, suggested. Even my drug addled Rory thinks Jack raping Kayla is irrelevant especially since it happened before JJ was born. They should focus on Jill.

Jarlena.
John and Marlena agreed they need to discuss their future but instead of doing it while John has nothing better to do, they decided to wait until he gets out of the hospital. True soap opera form. Shouldn’t they be making up for lost time?

Sami’s offer.
Last week in Deconstructing “DOOL” I said, What do you suppose happened to EJ? We can only assume he’s really dead I guess, though it hasn’t stopped fans from wondering if he’ll still show up. It’s fun to have hope. Those business dealings of Sami and Kate’s, however, have been uber boring. If we wanted to watch a soap about big business we’d watch Y&R. That being said, Kate wanting to help Sami out of her mess without a catch was endearing. The scenes with Sami and Nicole were also fantastic and heart-warming. They’ve such great chemistry and it’s a shame they weren’t in many scenes together all along. Those flashbacks were terrific. My only beef is that they keep talking about protecting Sami’s kids from Stefano but moving to Los Angeles and becoming famous with their own movie isn’t exactly going to hide the kids from their Nonno.

Big bad Chad threatened to tell Stefano that Sami had a secret so she spilled her guts to her brother-in-law and he offered to help. It was a bit of a let-down only because we’re still unsure if Chad is trustworthy.

Having Sami go off to “Hollywood” to make a movie is a huge letdown. Maybe once the movie’s done she’ll take the kids to Switzerland to be with Carrie and Austin. In my mind that’s where she’ll be. With family.

Tell us what you think. Vote. Days Poll: Should Sami do a movie?

Chad versus the volcano.
The volcano is Ben. He’s such a hothead, constantly attacking Chad and really, it’s getting old. It’s a turnoff. Team Chad’s looking better and better.

That’s all I’ve got, folks. Take it with a grain of salt. It's all in fun. And please - have a fantastic weekend! Feel free to leave a comment or three about this week’s Salem happenings!

Kate to Sami, "Would you make her fix her shirt?"

Will to Sonny, “In the magazine business, we like to sell magazines.”

Johnny, “The kids at school say nonno and daddy are crooks.”