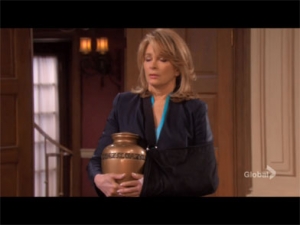 We spent the week with Sami. Many sobbed along with her mourning over EJ’s demise, wondering if the zombie serum Kristen injected into him would have him up and around or if he was done for good. In addition to that, there was no shortage of drama.

Elvis has left the building.
EJ died in Samanther’s arms this week after being shot by Miguel, who must be the first DiMera henchman (that I know of) who has changed sides. Either he’s that dumb (I mean he is a DiMera henchman and they’re notorious for being dumb) or Clyde gave him an awful lot of money and he’s desperate. Or was desperate. Now, he’s probably six feet under in some place called Poplar Bluff. Sami was in shock at finding her husband dying on the ground. Her grief poured out so much that the character wore her clothes inside out and the actress stated on her social media pages that she had to drink a “gallon of water” after those scenes and had a big headache from all the crying. No kidding! Who knew Alison Sweeney had anymore tears left to cry after all these years of Sami crying! I digress. They were touching scenes though surreal and not the way we all thought EJ would leave Salem or even die. Filming Sami telling the kids that EJ was dead from outside the patio doors had a feel of intimacy. You could see Sami mouthing the words, “EJ died today.” Of course moments later we saw Kristen injecting her brother with whatever Dr. Rolf concocted for Stefano. You know, zombie serum; the elixir of life. Stefano then had EJ’s body brought to his new lair and we guess someone else’s cremains are in the urn. Yech. What do you suppose happened to EJ?

Here are a few possibilities:

He’ll come back to life.
His body will be preserved cryogenically until Stefano can bring him back to life.
Stefano will clone EJ and embed EJ’s memories into the clone.
EJ cloned himself and is hiding out with Susan in England.
Nothing. He’s dead and will be buried in Italy or wherever Stefano is.

Sami wasn’t the only one to mourn EJ. Stefano was broken up, Kristen, Abigail, even Chad. All those who said he was dead to them. It was very moving to feel their pain. It’ll be hard for them to let go of the guilt. Nicole on the other hand, made peace with EJ recently. She and Daniel seem to have bonded over her pain which is a blessing.

Time to vote! Days poll: Where will Sami take the kids?

Blowing our minds.
Sure. We get it. It hurts more when you’re screwed over by those you love but still…It’s really exhausting for the fans to wrap their heads around Eric’s ability to even discuss forgiving a woman for drugging and raping him and his inability to forgive another who kept the proof of this from him. Eric’s ability to hug Kristen drove all of us mental including Nicole. It’s unclear of why they’re still beating this dead horse. Are these two not finished? Are we waiting to add a third party to the already annoying storyline by having Eve Donovan fall all over Eric?

Go Paige!
Paige rocked telling Mary Beth that “buying birth control is what responsible people do” and to keep quiet about it or this “bestie thing” is over. That was amazing. Mary Beth needs to learn a few things about how to be a friend. Paige then got brutally rebuffed by JJ once again when she offered sex and obviously not one to be deterred; she let herself into the Horton homestead and jumped into bed with him. Quelle surprise! Things just got interesting.

Brady got some.
Last week in Deconstructing “DOOL” I said, Brady just can’t stay away from temptation. It goes double this week. We should be happy in a sense. At least someone’s getting some but Theresa’s not exactly the person anyone wants Brady to even go near let alone have sex with. Still, it was hot. Brief, but hot. It’s understandable that he can’t say no either, what with Kristen pulling out all the stops to seduce him. A man can only take so much! The big concern for most is that Theresa will become pregnant if she isn’t already.

Surely Theresa can’t be dumb enough to really think that Brady taking her to bed means that they’ve started over? Yikes.

Stick the knife in further... and twist.
Jordan told Rafe she heard about “Chad’s brother” not just “EJ” when she has known EJ longer than Chad and should associate him with Sami, not Chad. You could almost feel the knife twisting in Rafe’s gut. It’d be really nice if Rafe would just stay away from her and get laid like most men would have done by now when they’re dumped and moved on. Rafe needs way more to do and a great leading lady.
How bizarre was it that Jordan met Chad twice and yet she wandered into the DiMera mansion unannounced in order to comfort him. Can’t she just wander into the next town and never return? Truly, let’s get serious here. I don’t dislike this character but I don’t like her either. How is it possible to feel either way about her when the great and powerful Oz still hasn’t given her a personality?

Clyde’s present to Kate.
Did anyone else feel creeped out when he read that fortune for Kate? “Have fun. It’s only naughty if you get caught.” The rube tries too hard.

Putting your life on hold.
Hope was able to tell Ciara that she dumped Bo because they can’t live their lives on hold forever, waiting for him to grace them with his presence. This just days after the actor Peter Reckell tweeted that he might see some progress with some other venture he’s working on. Not "Days." Ciara came around rather fast and gave the couple her blessing. The whole thing was really well done and surprising since Ciara can be rather difficult...yeah we'll just say she's "difficult."

Hope to Ciara, "We can't put our lives on hold forever for him."

Stefano, "My son is now where he belongs. With his famiglia. That b**** Samantha will never know the ashes in that urn aren't her beloved EJ's."

Clyde, "Don't go all lily-livered on me."