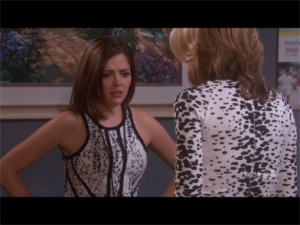 This week we saw deception, romance, and death came to Salem. It was good old fashioned soapy goodness…

Kristen, “You still want me.”
Brady, “I still want cocaine, but some impulses you can’t act upon.”

Brady just can’t stay away from temptation. I think Kristen might be one of the ten steps in Brady’s AA/NA program that he hasn’t cracked yet. I forgot how hot they are together. It feels icky to say that knowing that she drugged and raped his brother, the priest. But…they’re hot! And again, she’s hot with Daniel. Maybe she’s like Nicole. Just hot with whatever character plays opposite her. It’s really an art form!

Secrets and lies.
It’s a little strange how Anne and Eve don’t know what secret Theresa’s keeping, and that neither asks nor seems to care. Eve likely has guessed what happened by now but maybe doesn’t want to get involved. It’s probably for the best. Besides, she’s got her head full of ways to dress like her sister and get JJ out of her kid’s life. Speaking of JJ, is it wrong to think he’s making mountains out of molehills where the family secret is concerned? How does he really expect the most level-headed person in town, Paige, to react to learning his dead father raped his aunt 713 years ago? There’s seriously no need whatsoever for him to keep the secret. It’s none of her business, and all has long since been forgiven by Kayla. Too forced.

John’s big reveal:
Good old school soapiness! John spent the better part of the week keeping us on pins and needles, drawing out his big reveal. He really milked it by slowly gathering everyone to his bedside and then delaying the reveal further. It was funny watching Kristen’s attempts to contain her glee while waiting for John to shut Theresa down. How Theresa didn’t pass out, poop in her pants, or have a stroke while he did this to her is beyond me. Though, at one point it looked as though her eyeballs were literally going to pop right out of her head until John lied and said Brady hit him but only in self-defense. Kristen almost lost it. Does John really just think Theresa’s the lesser of the two evils? I’m not sure if I can agree with that. Maybe he’s expecting Kristen will handle Theresa herself. He has to know that she’ll take action. Last week in Deconstructing “DOOL” I said, Something will get in the way of Theresa getting her just desserts but for how long?

What’s his story?
Chad is really getting interesting. He’s got this mouth on him. He doesn’t mind telling it like it is but he’s almost detached from it – so nonchalant. So refreshing. Sometimes they write Eric like this but Eric often slips off his high horse on to that high road he likes to go down so it doesn’t have the same effect. The only pitfall I can foresee is that he has his eye on Jordan. Wouldn’t he be more fun with someone a little more exciting…lively…alive? There is no bloody chemistry with Chad and Jordan or Chad and Abigail and chemistry’s the first thing viewers notice about a couple. It’s a necessary ingredient for anyone to become invested in any couple on any television show or film. It’s hard to reconcile a Chad that absolutely loathes his brother when the last time he was in town he loved his brother so much he took a bullet for him. Either he’s still hurting or he really has changed and become more DiMeraesque. In that case, he could be as bad as EJ once was which wouldn’t suck. We need that element.

Stalker or alibi?
Was Chad in the square talking to everyone so he can use them as an alibi for EJ’s shooting? He did his homework – he knew Jordan’s day off. Did he plan this or was he just stalking Jordan?

Ejami’s end.
Well this was unexpected. “Days” kept this whole thing under wraps so well I don’t think anyone really knew what was going to happen – or knows what’s to come with the Ejami storyline. Let’s break it down: Stefano disowned EJ earlier in the week, Chad admitted he loathed his brother to anyone who would listen, and even wanted Will to print it in his expose, and Kate talked about how much she thought EJ and Sami were revolting. Clyde and Jeremiah paid Miguel off and Miguel changed camps and Clyde finally showed he’s not as much of a hayseed as he sounds. EJ told Clyde to get out of town and Clyde showed his true colours by saying, “Well golly EJ I just don't see that happening.” Then he chewed his Chaw, spit, and kicked at the dirt. EJ was trying to assert himself as any good mob boss should do and took one in the gut for his trouble. It wasn’t the way most fans saw EJ ending. Many are still wondering if they’re faking his death and if Sami will leave town with the kids and meet him on some island somewhere. It’s pretty surreal. Sami’s shock was palpable. Really well done. EJ DiMera will be missed!

Ben did what?
Who is trying to digest that Ben loathes Clyde and refuses to forgive him for whatever it was that happened in the past yet he has no problem borrowing money from him? Is Ben taking a step toward forgiveness or is he using Clyde? The sex between Ben and Abigail must have been mind-blowing, literally if neither can remember what she likes to drink. That’ll make it difficult for Ben to say no to Clyde’s offer to pay for school. This will mean money for his own bed. I mean his own place. Mind-blowing sex might just win over dignity.

Chad, "I bet that makes your heart go all a flutter."

Stefano to EJ, "You are no longer my son."

"EJ and his Samantha are the most revolting show around," Kate says.